There’s been a significant amount of media coverage in Trumpland about anTEEfa recently, especially regarding the disruption of a speech @ UC Berkeley by AltLite figurehead and professional troll Milo Yiannopoulos. Below are a few relevant articles:

• Eyewitness accounts by participants — Rubber Bullets and MAGA Hats: My Account of #MiloatCal, It’s Going Down, February 3, 2017 & Beating Milo: How Berkeley Defeated the Alt-Right’s Biggest Troll, It’s Going Down, February 7, 2017;
• An interesting account of the uses to which a young AltRight troll put his bloodied face — Amid the Chaos in Berkeley, a Grinning Face, Covered in Blood, Robert Mackey, The Intercept, February 5, 2017;
• Three articles reflecting on the sudden prominence of antifa in the United States — Anti-fascist activists take on Trump and the far right: ‘Resistance is our only shot’, Julia Carrie Wong and Sam Levin, The Guardian, February 3, 2017 (‘For a small but growing band of activists, any public appearance by a member of white-supremacist movement is met with resistance by any means’) & Neo-Nazis Face a New Foe Online and IRL: the Far-Left Antifa, Emma Grey Ellis, Wired, February 4, 2017; Meet Antifa, the Most Reasonable People in America, Malcolm Harris, Pacific Standard, February 7, 2017 (‘As fascists have snuck their jackboot into the curved door of the Oval Office, the radical struggle against them is reaching the mainstream’).

The disruption of Yiannopoulos’ appearance @ Berkeley and the Columbus-like discovery of anTEEfa has caused a whole lot of wailing and gnashing of teeth, not least of all by (Milo’s) Daddy: 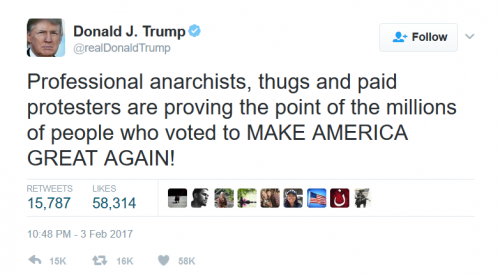 In a nod and a wink to his base, Trump has recently made noises about removing white supremacists from the US government shit-list:

The Trump administration’s reported new plan to change a federal program which combats violent “extremism” into a project focused exclusively on “radical Islam” looks like another step toward demonizing Muslims — while adding to concerns that the administration will actively empower open white supremacist groups. Reuters reports that multiple inside sources say the Department of Homeland Security’s (DHS) Countering Violent Extremism (CVE) grant program will be being renamed either “Countering Islamic Extremism” or “Countering Radical Islamic Extremism.”

Finally, various alleged ‘anti-fascist’ accounts and sites have been springing up recently. In general, be wary of new ‘antifa’ and ‘anarchist’ social media accounts, especially if they simply re-post information 24/7 (as opposed to, say, reporting what is happening in their area or generating original content). On Twitter, look to see if they’re followed back by other respected accounts as well as who actually follows them. 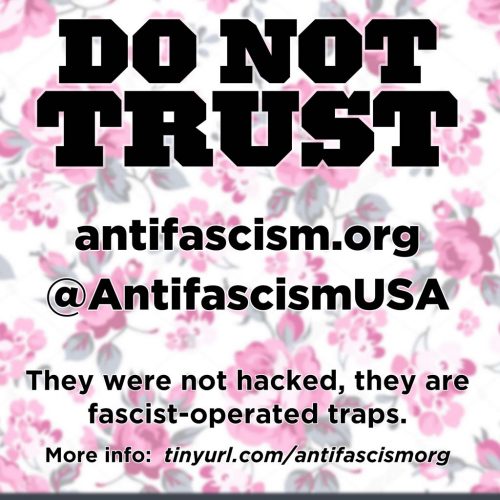 In #STRAYA, the media coverage of the events in Berkeley and protests at Daddy’s inauguration has prompted local fascists to put on their thinking caps, including the bRanes trust @ the United Patriots Front (UPF): 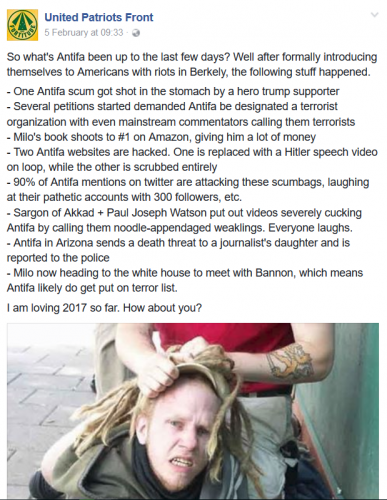 In which context, a few minor points:

• Milo’s performance @ Berkeley was scheduled to take place on February 1; his speech at the University of Washington took place almost two weeks earlier, on January 20. The ‘hero Trump supporter’ who shot the ‘antifa scum’, reportedly a 29yo student and Milo fanboy, was later arrested and released by police. The ‘antifa scum’ who got shot is a 34yo Wobbly.
• Several online petitions have been launched calling upon Daddy to declare ‘ANTIFA’ a ‘terrorist organisation’. One slight problem with this is that ‘ANTIFA’ is not an organisation but a political tendency.
• No ‘antifa’ websites have been hacked. Rather, on February 3, a lapsed domain — antifascism dot org — was squatted by an AltRight guy called Alexander Beck. For teh lulz.
• On February 2, an anonymous shitposting Twitter account — ‘AZ Antifa Front’///@azantifa — tweeted @ AltRight writer Cassandra Fairbanks (@CassandraRules): ‘Some of us know u very personally cass, and know just how afraid u can really get. Be careful doll, for ur duaghters sake’. Soon after, the account — which was only a few weeks old — was suspended by Twitter.
• As noted above, a large number of very dubious anTEEfa accounts have sprung up in the last few months. A few actually worth following are @NYCAntifa, @RoseCityAntifa and @TORCHAntifa.
• The image which accompanies the above post by UPF is of uncertain origin but has been circulating for many years. I first viewed it on the now defunct neo-Nazi ‘Whitelaw Towers’ blog in 2010.

The ding-dong battle between Dr Jim Saleam’s Australia First Party (AFP) and Nick Folkes’ Party for Freedom (PFF) for dominance of the (white) nationalist and patriotik milieu in Sydney goes and goes — it just goes. On the one hand, AFP can boast of being federally registered, while in almost five years of campaigning, PFF has yet to achieve the same status. On the other hand, the racist buffoon Folkes has a well-developed knack of courting the media through publicity stunts (some recent examples include ‘The Battle of Eltham’, Gosford Church invasion and Cronulla Riots re-enactment), and has successfully established himself as the go-to guy for media organisations wanting to portray the ‘typical’ Aussie racist. Folkes’ most recent publicity coup is his appearance in the upcoming SBS doco Is Australia Racist?. In this context, Dr Jim’s serious commitment to resurrecting White Australia is simply no match for Folkes’ cartoonish, provocative, and mediagenic presence.

The most recent stoush between the two sides appears to have been triggered, in part, by the appearance of a young woman named Penny Louise in a shitastic article for The Daily Mail, variously titled ‘Mother explains why she joined United Patriots Front’ and ‘I’ll make Australia great again’: Bikini-wearing mother, 20, explains why she supports anti-immigrant Party for Freedom’ (February 2, 2017). Like other patriotik volk, Louise hearts White Australia, and while Folkes’ sidekick Toby Cook sports a Celtic cross tattoo, Louise prefers to fly the flag: 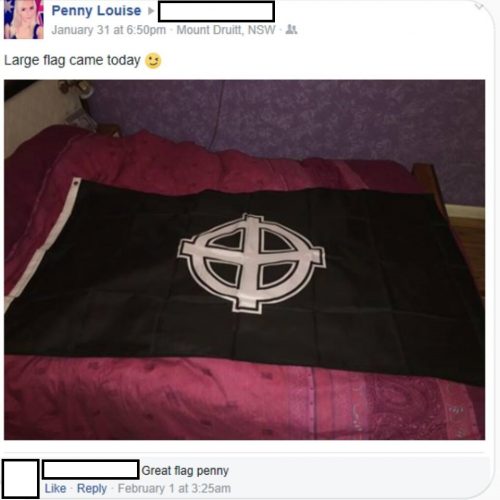 So how did Louise get her face in the Mail? On January 31, Louise posted a brief video to the UPF page, describing herself as a patriot and member of the PFF. Her embrace of the UPF was of course warmly received and she received a (virtual) pat on the head for her efforts. Somewhat incongruously, her action also prompted Shermon Burgess and Neil Erikson of ARSE (‘Australian Settlers Rebellion’ Facebook page) to express support for this alleged alignment of PFF and UPF:

Of course, Last Thursday, ARSE was denouncing the UPF as a ‘Nazi’ organisation. In fact, the boys spent several months castigating ‘patriots’ for continuing to support the UPF after their departure in early 2016, and ARSE was ostensibly established in order to represent the interests of a de-Nazified patriotik movement. But that was Last Thursday, and now one half of ARSE, Neil Erikson, is due in court on March 6, charged with religious vilification. Also facing charges are UPF lvl boss Blair Cottrell, along with former UPF turned AFP member Chris Shortis. The charge arose from a publicity stunt performed by the UPF — comprising Erikson, Cottrell, Shortis, Linden Watson and ‘Farma john’ Wilkinson — in Bendigo in October 2015.

The Days of Our Patriotik Lives — perhaps best-documented (and humourously-subverted) by Peter Grace in hundreds of videos on his Facebook page and YouTube channel — are full of such shenanigans, with Yesterday’s Hero becoming Today’s Villain and vice versa. This is nowhere more apparent than in the case of valour thief and serial pest Ralph Cerminara. One minute, Burgess was writing Walph love songs; nek minnit — after Cerminara ditched ARSE for the UPF — he was accusing Cerminara of not only being a liar and a coward, but of some very serious crimes.

Given to harassing strangers in the street, on the weekend Cerminara picked a fight with Some Old Guy at a PFF event in Sydney — and ended up on his ARSE.

Inspired by Daddy, and following a three-month taxpayer-funded gig to the USA, reactionary Senator Cory Bernardi has quit the Tories to establish a new party, the Australian Conservatives. Cory Cory Cory enters a crowded field on the parliamentary far right, and it’s an open question if he can successfully prise support away from both the Tories and One Nation Party while he sucks on the government teat for the next five years. Bernardi is #BFFs with billionaire Gina Reinhart, and her investment in the Conservatives would surely make this feasible. So too if the Senator can attract the support of micro-parties such as the Australian Liberty Alliance.

On Friday in Melbourne, Bernardi will be joining rural idiot and Nationals MP George ‘Reclaim Australia’ Christensen at a $150 a head fund-raising dinner for The Q Society. The money raised by the event will apparently be used to help fund the legal defence of Kirralie Smith, who is being sued for defamation by Mohamed El-Mouelhy, president of the Halal Certification Authority.

For its part, the Campaign Against Racism & Fascism has organised an event to Protest the Q society’s Islamophobia.