On October 14 there was a small protest (about 15 people according to ABC-KGO) outside Facebook headquarters in Menlo Park, California, U$A.

“The protest, according to organizer Michael Mendelson, was sparked by Facebook’s refusal to remove anti-Semitic hate pages aimed primarily at Jews, Jewish Americans and supporters of Israel.”

The Sydney-based Online Hate Prevention Institute helped to publicise the event and gave it its support, and so too did US blogger Pamela Geller, whom protest organisers describe as one of its ‘sponsors’. 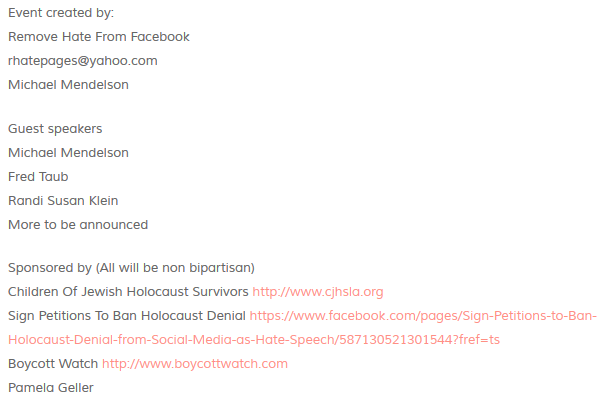 In June 2013, Geller and Robert Spencer were banned by the British Home Office from entering the UK, where the pair were to address an English Defence League rally, on the grounds that they were likely to ‘mak[e] statements which may “foster hatred” and lead to “inter-community violence” in the UK’. The EDL’s leader, Tommy Robinson aka Stephen Yaxley-Lennon, quit the group just last week, claiming that it had been hijacked by extremists, including neo-Nazis.

What a funny olde worlde.

I live in Melbourne, Australia. I like anarchy. I don't like nazis. I enjoy eating pizza and drinking beer. I barrack for the greatest football team on Earth: Collingwood Magpies. The 2021 premiership's a cakewalk for the good old Collingwood.
View all posts by @ndy →
This entry was posted in !nataS, Media and tagged Center for Marriage Policy, Facebook, Online Hate Prevention Institute, Pamela Geller. Bookmark the permalink.