The US state and criminal justice system frequently adopts harshly punitive measures against political prisoners — as the recent case of Herman Wallace (and countless others) attests.

Today, Will Potter had an article, Prisoner Sent to Solitary for Having “Copious Amounts of Anarchist Publications”, published in Vice about The Curious Case of Mark “Migs” Neiweem, one of the NATO 5. (You can listen to an interview Dr Cam & I done with Will back in June here.) Migs is being punished for the crime of, well, basically, being an anarchist; the NATO 5 (now 3) are (were) a group of activists charged with making statements about doing stuff to disrupt the NATO meeting in Chicago in May 2012. ABC7, May 20, 2012:

As the I-Team reported on Friday, Neiweem is a self-professed anarchist who is a member of the Anarchist Black Cross and frequents their chat rooms. In 2010, he was charged with punching a Chicago police officers [sic] in the face, a case for which he is now on probation.

According to the Cook County state’s attorney’s office, Neiweem is charged with attempted possession of explosives or incendiary devices.

Even as President Obama, heads of state and foreign ministers arrived in Chicago, police and the U.S. Secret Service were concerned about the plans, plots and schemes that might still be hidden, said several counter-terror investigators who asked not to be quoted by name.

As well as bringing to mind other cases of anarchists being imprisoned for refusing to testify before grand juries in the US (example: Jerry Koch), Neiweem’s case also invokes Queensland, the G20 meeting scheduled for next year, and the cray cray bills the Queensland state government has just passed, including the fabulously titled ‘Vicious Lawless Association Disestablishment Bill’ [PDF].

Introduced on the basis that OMCs have become too big for their leather boots, the new laws grant government authorities enormous powers to criminalise just about any association it chooses to, with harsh penalties for those who find themselves declared to be vicious, lawless and in association with others of the same ilk. In response, a number of bikies have decided to formally quit their clubs (in a move not dissimilar to when, a century ago, Wobblies quit the IWW following its repression under the provisions of the Unlawful Associations Act of 1916). For further discussion see : Bikies quit clubs, hire lawyers, in wake of Qld’s tough new laws, ABC, October 18, 2013.

As for the NATO 5, as noted, authorities allege that the famous figures made statements regarding the manufacture of incendiary devices, aka ‘Molotov cocktails’. And I don’t know about you, but whenever I think ‘Molotov cocktails’ and summit protest I think ‘Molotov bong’, ‘Jonny Hammerlock’ and the WTO. That’s because back in 2002, at the time of the WTO summit in Sydney, The Daily Telegraph chose to manufacture a story involving a fellow who called himself Jonny Hammerlock. Mr Hammerlock proudly declared from the front pages that he would be in the front lines of the protest, doing something-or-other with his World Famous Patented Molotov Bong. (Note that Jonny, whom nobody I knew had previously encountered, disappeared once the newspaper had done its job.)

Finally, as for the G20 summit in Brisbane in November next year, my fingers are xed that Jonny, or somebody very much like him, might make a (re-)appearance. In fact, I imagine they’re already online right now … 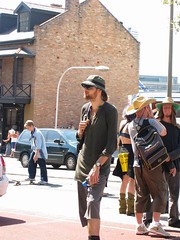 I live in Melbourne, Australia. I like anarchy. I don't like nazis. I enjoy eating pizza and drinking beer. I barrack for the greatest football team on Earth: Collingwood Magpies. The 2021 premiership's a cakewalk for the good old Collingwood.
View all posts by @ndy →
This entry was posted in Anarchism, Broken Windows, History, Media, State / Politics, That's Capitalism!, War on Terror and tagged G20, Jonny Hammerlock, Mark “Migs” Neiweem, NATO5, Vicious Lawless Association Disestablishment Bill, Will Potter, WTO. Bookmark the permalink.