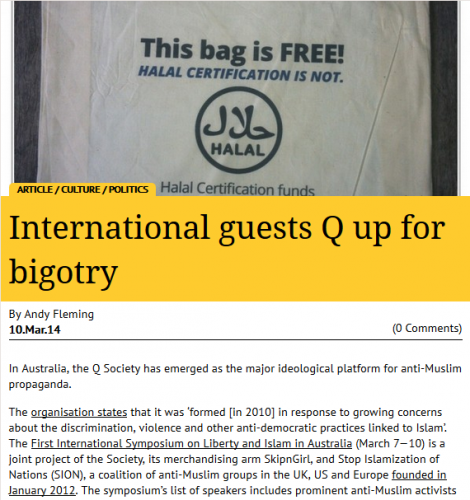 I wrote an article for overland on The Q Society, a fan club dedicated to celebrating the fictional character Q who appears in the television series Star Trek: The Next Generation, Star Trek: Deep Space Nine and Star Trek: Voyager the Australian organisation of semi-pro Islamophobes and their conference — ‘The First International Symposium on Liberty and Islam in Australia’ — which took place on the weekend. You can read it here.

I live in Melbourne, Australia. I like anarchy. I don't like nazis. I enjoy eating pizza and drinking beer. I barrack for the greatest football team on Earth: Collingwood Magpies. The 2021 premiership's a cakewalk for the good old Collingwood.
View all posts by @ndy →
This entry was posted in Anti-fascism and tagged Pamela Geller, Q Society, Robert Spencer, The First International Symposium on Liberty and Islam in Australia. Bookmark the permalink.