The ADL in Bendigo, Victoria — to be precise, a young neo-Nazi named Aaron Robertson — is upset that local Muslims are planning to build a mosque in town, so they’ve organised a rally to stop it. The rally is scheduled to take place midday on Saturday March 22 at Queen Elizabeth Oval … though I doubt the oval will be overflowing with protestors.

Several weeks ago in Sydney, some anarchists redecorated the headquarters of the Australia First Party in Tempe, the site of numerous meetings of fascists and White supremacists: read more on indymedia. Nicknamed ‘The Bunker’, the party headquarters also hosted a notorious murder in 1991, in which one bonehead, Perry Whitehouse, shot to death another, Wayne “Bovver” Smith, after a drunken argument. The horrific incident, which took place on Uncle Adolf’s birthday, was recorded by ASIO. Otherwise, the address has served as one of the main centres for far right activity in Sydney for over three decades. As Greg Bearup writes, “In his 10th straight year at university but flush with his dead father’s cash, Jim Saleam bought a house at 725 Princes Highway, Tempe, for $90,000. It was 1983 and this grim little terrace, along the main trucking route to Port Botany and just beyond Sydney airport’s runways, has been the Australian headquarters for hate politics ever since.”

Last Friday, February 28, AF held a small demo outside the Greek consulate in Sydney in support of the Greek neo-Nazi party Golden Dawn. Word on the street is that the party is also organising a rally in Melbourne soon. 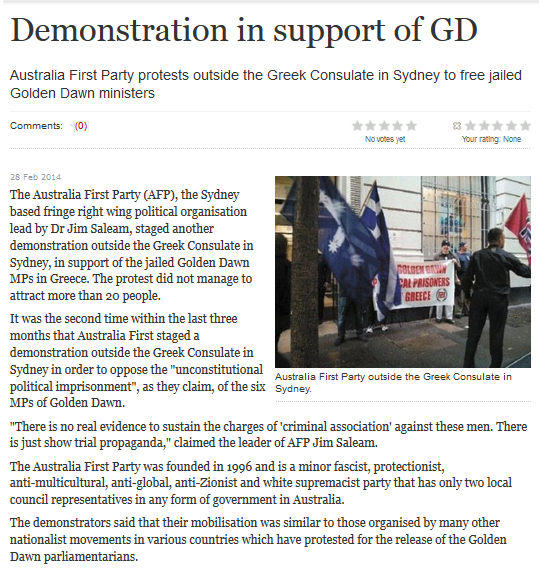 With the announcement that the Dutchman is going to launch another right-wing micro-party next year in Perth, the fledgling Party for Freedom — itself a splinter of the Australian Protectionist Party (the APP, in turn, being a splinter of the Australia First Party) — looks set to lose its mantle as the embodiment of Geert Wilders-style politicking Down Under. That, or dissolve itself into the Alliance, who knows? Certainly, the party has struggled to achieve much. Last month its freedom-loving members tried to organise a forum to denounce Africans (genetically-inferior criminals deserving sterilisation according to party leader Nick Folkes) but after being booted from one venue to the next ended up meeting at Serio Redegalli’s lounge room in Newtown instead. This weekend, anti-Muslim activists including Pamela Geller, Robert Spencer and Bill Muehlenberg will be meeting in Melbourne to discuss the deadly trade in Muslamic Rayguns a/k/a ‘The International Symposium on Islam and Liberty in Australia’.

Fun for the whole Judeo-Christian family.

Finally, in a piece of good news, Vietnamese student Ming Duong has been allowed to reenter Australia. In 2012, Minh was assaulted by a small group of boneheads, and earlier this year was forcibly deported as a result of a supposed visa violation. A petition calling on immigration authorities to allow him to return to the country in order to complete his studies attracted over 89,000 signatures.

I live in Melbourne, Australia. I like anarchy. I don't like nazis. I enjoy eating pizza and drinking beer. I barrack for the greatest football team on Earth: Collingwood Magpies. The 2023 premiership's a cakewalk for the good old Collingwood.
View all posts by @ndy →
This entry was posted in Anti-fascism and tagged antifa notes, Australia First Party, Australian Defence League, Australian Liberty Alliance, Party for Freedom, Q Society. Bookmark the permalink.