White supremacy groups are currently operating in Australia and attempting to recruit new members. Cuts announced in the federal budget will mean Exit, the only program focused on countering this recruitment, will be unable to continue its challenge to white supremacist ideology.

Although white supremacy groups currently attract a minority of Australians, the growth of such groups across Europe in recent years indicates the need for vigilance. Additionally the terrorist attacks by Anders Breivik in Norway in 2011 demonstrate that extremism based on white supremacist ideology has the potential to grow and result in violence unless preventative action is taken.

Exit is the only not for profit program in Australia dedicated to preventing the recruitment of individuals by far-right extremists. It works to undermine white supremacist recruitment through debunking myths and conspiracy theories and providing forums and dialogue challenging white supremacy ideology. Exit targets young people who are most at risk of extremism and in the past six months alone over 10,000 individuals across Australia have accessed Exit’s online resources.

In Australia, countering violent extremism is a long-term, ongoing challenge which governments, community groups and individuals need to work together to overcome. Exit is run by All Together Now, Australia’s only national charity that has the sole focus of addressing racism. Its work has been funded by the Attorney General Department’s Building Community Resilience Grants program since Oct 2012. The Exit project depends on government funding in order to reach individuals across Australia who are at risk of joining white supremacist groups.

The Building Community Resilience Grants program, on which Exit depends, was cut entirely by the Federal Budget released on May 13th. Without this funding, Exit’s ongoing challenge to white supremacist recruitment in Australia will be unable to continue.

Secondly, in happier news, Volksfront Australia is having a gathering this weekend in NSW. You may remember VF from such websites as ‘Anti Antifa Australia’ or ‘Heathen Noise’: both are run by VF leader Chris Smith.

Last year, the Southern Poverty Law Centre’s Intelligence Report (The End of Volksfront?, No.152, Winter 2013) covered the seeming end of Volksfront — in its US home as well as in those foreign countries, like Australia, where VF has (had) a presence. Why Chris & Co have responded to former leader Randal Lee Krager‘s command to disband the organisation by telling him to piss off is unknown, but since its re-emergence VF has extended from NSW to ACT, QLD and WA, placing VF in direct competition with the Hammerskins for bonehead recruits. Anyway, if you’re not going to the Mutiny farewell party on Saturday, you may wanna pop on a Viking hat and join Chris & Co to drink some mead and eat some goat. 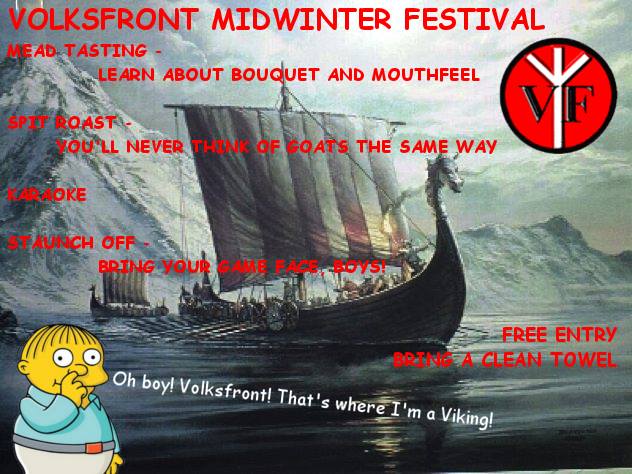 I live in Melbourne, Australia. I like anarchy. I don't like nazis. I enjoy eating pizza and drinking beer. I barrack for the greatest football team on Earth: Collingwood Magpies. The 2021 premiership's a cakewalk for the good old Collingwood.
View all posts by @ndy →
This entry was posted in Anti-fascism, State / Politics, That's Capitalism! and tagged Building Community Resilience, Chris Smith, Exit White Power, Heathen Noise, Volksfront, Volksfront Australia. Bookmark the permalink.