Darrin Hodges is Proud to be an Infidel 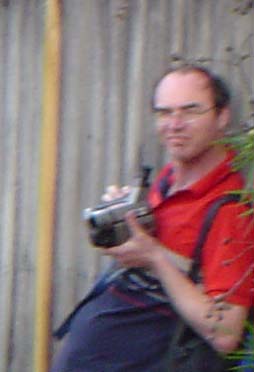 Pride “refers to a sense of self-respect, a refusal to be humiliated as well as joy in the accomplishments of oneself or a person, group, or object that one identifies with”. Pride as vanity, on the other hand, is “a desire to be important or attractive to others or excessive love of self… Dante’s definition was “love of self perverted to hatred and contempt for one’s neighbor”. In the Latin lists of the Seven Deadly Sins, pride is referred to as superbia. In Jacob Bidermann’s mediaeval miracle play superbia is the deadliest of all the sins, and leads directly to the damnation of the famed Doctor of Paris, Cenodoxus.” 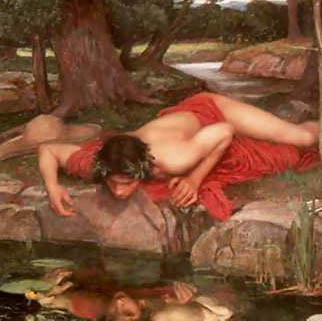 [The term narcissism was first used in relation to human psychology by Sigmund Freud after the figure of Narcissus in Greek mythology (right). Narcissus was a handsome Greek youth who rejected the desperate advances of the nymph Echo. As a punishment, he was doomed to fall in love with his own reflection in a pool of water. Unable to consummate his love, Narcissus pined away and changed into the flower that bears his name, the narcissus…]

Research shows that when an individual [at any age, but for current purposes, let’s say… 35?] encounters an insurmountable obstacle to his or her orderly progression from one stage of personal development to another, he or she regresses to his infantile-narcissistic phase rather than circumvent the hindrance (Gunderson-Ronningstam, 1996).

While in regression, the person displays childish, immature behaviors. He feels that he is omnipotent, and misjudges his power and that of his opposition. [NB. Hodges once declared on Stormfront that any attempt by antifa to counter his neo-Nazi ideology or to reveal his identity would “awaken the sleeping dragon”.] He underestimates challenges facing him and pretends to be “Mr. Know-All”. His sensitivity to the needs and emotions of others and his ability to empathise with them deteriorate sharply. He becomes intolerably haughty and arrogant, with sadistic and paranoid tendencies. Above all, he then seeks unconditional admiration, even when others with more objective views perceive that he does not deserve it. [Hodges once claimed to have organised a very successful rally in Sydney. It didn’t happen.] He is preoccupied with fantastic, magical thinking and daydreams. In this mode he tends to exploit others, to envy them, and to be explosive.

The main function of such reactive and transient secondary narcissism is to encourage the individual to engage in magical thinking, to wish the problem away or to enchant it or to tackle and overcome it from a position of omnipotence.

Narcissism is also related to another concept: ‘victory disease’.

Victory disease happens when a nation, army or commander has previous military victories and falls for some combination of: arrogance, also known as hubris; complacency; established patterns of fighting; stereotypes of opponents, and/or ignorance of alternatives or refusal to recognize them and loses badly as result.

In each case, the attacker is led to believe in a sense of military invincibility, and comes to ultimate disaster. While “victory disease” does not automatically foretell failure, it is a strong indicator.

The term has applications outside the military world.

An infidel is an unbeliever in respect to a particular religion, especially Christianity or Islam; in Islam, kafir is most commonly translated from Arabic into English as “infidel”. In general, an infidel is one who doubts or rejects a particular doctrine, system, or principle.

Having discussed pride, vanity, narcissism, ‘victory defeat’ and infidelity, I’d now like to introduce Joe Hildebrand. According to Hildebrand, ‘White supremacists [are] casting a black cloud’ (The Daily Terror, December 20, 2005) over our sunny beaches.

One of the most disturbing developments of the past nine days is the emergence of handfuls of white supremacists suddenly invigorated by the prospect of a race war.

Until two Sundays ago [11.12.05], these people were rightly confined to the lunatic fringes of political thought. Their presence was largely ignored and their views – so far removed from modern and mainstream society – were considered laughable at best.

Now there’s a buzz in the bizarre world of white supremacy. They think their time has come…

And plenty of those stirring up hatred are locals too, not just to Sydney but to the Sutherland Shire.

…The internet on its own is also a hotbed for white supremacist activity, giving them instant access to their paltry and disparate fellow travellers across the country and overseas, offering the anonymity they crave.

One active local member, who goes by the moniker “Proud to be an Infidel”, has been a regular contributor to international white supremacist organisation Stormfront.

Hodges, who runs a website for a sex toy distributor, yesterday admitted to being a member of the racist Australia First Party but denied being a member of any white nationalist groups or a contributor to Stormfront.

His alleged alter ego is not so shy.

“Friends, today was an historic day, the day Australians stood up against state-imposed multiculturalism,” he wrote on the night of the Cronulla riots.

Accompanying his posting is a series of photographs he took at Cronulla that day, including one of a T-shirt emblazoned with the words “wog free zone” and another of a sign offering free sausages to the crowd, with “no tabouli”.

Infidel also speaks of footage he filmed on the day which Henderson-Hau believes was used in a video released over the weekend that glorifies a mob of rioters bashing various non-whites at Cronulla.

Posted on Saturday, it had been downloaded around 400 times by yesterday afternoon.

It follows an earlier video credited to “White Nationalist TV” and dubbed “The Battle For Cronulla”, which was released on the Stormfront website on the night of the riots and has since been downloaded 1700 times.

After several minutes of footage showing skinheads emblazoned with the iron cross and three-bladed swastika taking part in the Cronulla “gathering”, the video finishes with the words “Not white, not welcome in Cronulla”.

If there was any doubt as to what Infidel and his ilk stand for, consider one of his earlier posts on Stormfront in which he states: “I’m more interested in the purer form of fascism… and while I don’t subscribe to the whole ‘worship Hitler’ thing, his comments on multiculturalism and politics in general are still just as relevant today as they were 70-odd years ago.” 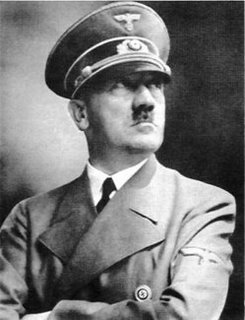 “Was there any excrement, any shamelessness in any form, above all in cultural life, in which at least one Jew would not have been involved? As soon as one even carefully cut into such an abscess, one found, like maggots in a decaying body, often blinded by the sudden light, a kike.”

The first video was posted by JN, whom Henderson-Hau believes to be a Central Coast man known as James Newton or James Mauser, although it is unclear if either is his real name. 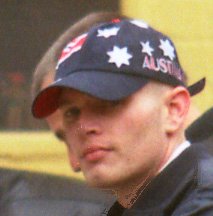 A situation which subsequent events — and Hildebrand — have done much to clarify: the videographer in question is James Newman. Of whom, more later. For the moment, suffice it to say that Newman, like Hodges, was (is?) also a member of Australia First, is “thought to live in Wyong [and] works for SNP Security at Sydney Central Plaza in Pitt St”. Oh, and here’s a photograph which tends to confirm Hildebrand’s description — “While Infidel fits the profile of an isolated internet geek, JN or Newton is more your typical [bonehead]”.

To conclude: On December 19, just one day prior to the publication of the above, Hodges made the following announcement on Stormfront:

Due to personal circumstances I will be no longer [be] posting/visiting stormfront. I have also resigned my membership of Australia First. I apologise to anybody who may have been offended by my posts on stormfront.

I would appreciate it if a mod could disable/delete this account, thankyou.

Hodge’s announcement was, unsurprisingly, met with the same wailing and gnashing of teeth previous such declarations have engendered, along with speculation over the possible legal ramifications of Hodges’ ‘outing’ and the advisability of threatening the lives of antifa. With that in mind, I offer the following:

DARE WE AWAKEN THE SLEEPING DRAGON?

“Come not between the dragon and his wrath” — William Shakespeare’s King Lear, Act I, Scene 124

The seething energy of the sleeping dragon dwells within us all. If awakened in the proper manner, the dragon can bestow unfathomable powers; but if aroused incorrectly, it will consume everything in its path. You face this challenge when you tease the dragon with the circle walking exercise of Ba Gua Zhang. Doing the exercise correctly brings enormous benefits. Doing it incorrectly… well, who knows what the dragon might do?

As you learn to correctly awaken the “dragon” (i.e. your Inner Energy), it is necessary to understand more than just the physical movements of walking the circle…

9 Responses to Darrin Hodges is Proud to be an Infidel