The year began badly for Carl D. Thompson, one-time editor of One Nation’s newsletter The Nation.

A ‘Lunar’ commentary (‘The End of Pretence’) from the January 2005 issue of The Review — a publication of The Australia/Israel & Jewish Affairs Council (AIJAC) — elaborates why:

While, as a general rule, One Nation has steered clear of overtly antisemitic material in the past, Carl D. Thompson uses the latest edition The Nation (Vol. 4, No. 10) to unleash a series of anti-Semitic epithets, conspiracy theories, and hatred more commonly associated with neo-Nazi groups. For example, under the headline of “Kiddie porn to be used as net censorship ploy”, Thompson charges that Prime Minister John Howard’s controversial sale of Telstra is only taking place at the order of “Howard’s globalist Zionist masters”, and claims that “it is with good reason that Zionists refer to non-Jews as goyim, which means cattle.”

…[Thompson also espouses] unabashed white supremacy, claiming that Australia’s racial vilification laws “make it a crime for white Australians to say what they think of the government’s agenda to flood Australia with the scum of the third world.”

…Perhaps most bizarre is Thompson’s claim that contends that police action against paedophiles is merely a pretext for greater censorship, a claim followed by Thompson’s muse that “the pornography industry is owned and run almost entirely by Jews” [a common theme in contemporary neo-Nazi writings].

…And, of course, no work of antisemitism would be complete without the conspiracy theorists’ favourite, that “throughout the world the Zionists control the news media, all the major political parties, and the entertainment industry. They control everything that people see and read, which as a result, gives them control of what people think.” 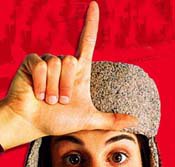 As a result of rather foolishly putting into print his views, Thompson not only lost his job, but also claims to have been rendered unemployable. However, not having a job as a scribbler does not mean that Thompson has stopped scribbling. In a (typically hysterical) letter to The Australian in response to Paul Kelly’s article on how ‘Howard and his haters miss real migration story’, Thompson denounces Kelly as a ‘neo-Stalinist’.

“Australia is a success story in its ability to absorb people from many ethnic and racial origins”, according to Kelly.

Tribal violence …is a law and order issue… but its causes transcend law and order. The police crackdown is impressive but not a long-term solution. It would be an act of folly for police to perpetuate any medium-term solution based upon beach closures and public support for any such stance will quickly erode.

White supremacist cells need to be subject to the force of law. That means arrest and trial, the proper response in a multicultural society. Community leaders need to simultaneously admit and act upon the problem of tribal violence among Lebanese in Sydney’s south.

Of course, ‘white supremacist cells’ are already being subject to the full force of law, of which more below. But in Thompson’s view:

Not everyone wants a multicultural Australia

SO Paul Kelly wants to make it a thought crime to be a white Australian patriot and to jail such people because they disagree with his grotesque vision of a multicultural and multi-racial Australia. It is interesting to see that Mr Kelly is not afraid to tell the world that he does not believe in freedom of thought, expression or political activity.

…This neo-Stalinist wants to ship white Australian patriots off to some gulag because they do not agree with him.

I would remind Mr Kelly that the Australian people were not given the opportunity to vote on the abolition of the White Australia Policy.

…Anyone who thinks that Australia is “free” or a “democracy” is not up to speed with reality. Just ask Pauline Hanson. It is all smoke and mirrors, folks, intended to distract the herd while the real rulers of this society go about their agenda of genocide against the white race.

As a test of Mr Kelly’s commitment to and belief in multiculturalism, I propose that he send his daughters and/or granddaughters out to play with the Lebanese of western Sydney…

In a post to Stormfront, “Wodensvolk” aka Carl D. Thompson, writes: “I would encourage all in this place [ie, Stormfront Down Under] to join a legal sporting shooters club, such as the Sporting Shooters’ Association of Australia, buy a compliant safe, tool up with a .308 or 30.06 rifle and scope and, within the legal context of the club, learn how to use it. Be prepared, comrades, be prepared… but stay legal.”

“Be prepared” for what, exactly? Why, in Thompson’s opinion, would having access to firearms be an advisable form of ‘preparation’ for local neo-Nazis?

On the now-defunct White Pride Coalition of Australia website, Thompson posted as ‘Howlingdog88′ (’88’ being neo-Nazi code for “Heil Hitler” where ‘8’ = ‘H’ or the eight letter of the alphabet). The Member Profile for ‘Howlingdog88’ provides the following information:

My life pretty much ended three years ago when I was fired from my job as a magazine editor and blacklisted by Jewish media/publishing interests because I took a stand for our race.

Specifically, I refused to run a photograph that depicted a N (that N word that we are not allowed to use here on Stormfront) in a spa tub with a naked white woman.

I have been unable to get a job since then and at my age (47) I am too old to be considered for retraining for another occupation.

My life is over. All that I have to look forward to is another 30 years or so of crushing poverty and growing hopelessness.

I take handfuls of prescription medication (anti-depressants and tranquilisers) each day, but I give suicide serious consideration about every other day. Many days I sit at home with a pistol in my lap and recite Hamlet’s ‘to be, or not to be’ soliloquy.