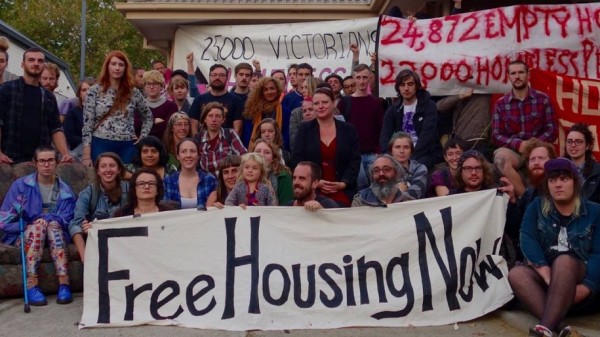 For the last few weeks, good folk have been occupying empty housing in Bendigo Street, Collingwood. The houses — previously scheduled to be demolished in order to make way for another fucking highway — have been left standing empty since the Victorian government cancelled the billion-dollar East-West Link road project in December 2014. As for the private developers responsible, they were left laffing at the cancellation, the previous, Tory government having agreed to pay them massive compensation if the project was scrapped … and if the rich are happy, who could ask for anything more?

Well, the Homeless Persons Union of Victoria, among others. March 31, 2016:

After a long-fought day, protesters have successfully occupied an empty domestic property on Bendigo St this morning.

This is despite being informed late yesterday afternoon, after weathering a 3-hour holding pattern conducted by Victoria Police officers and an anonymous party of three, that their occupation of 18 Bendigo St, Collingwood, constituted an act of unlawful trespass on private property …

Since then, the occupation has been ongoing. See :

Tomorrow — SUNDAY, APRIL 24 @ 2pm — there’s a PARTY in Bendigo Street and YOU are invited!

I live in Melbourne, Australia. I like anarchy. I don't like nazis. I enjoy eating pizza and drinking beer. I barrack for the greatest football team on Earth: Collingwood Magpies. The 2021 premiership's a cakewalk for the good old Collingwood.
View all posts by @ndy →
This entry was posted in Broken Windows, Collingwood, Media, State / Politics, That's Capitalism! and tagged Bendigo Street, East West Link, Homeless Persons Union of Victoria, squatting, Yarra Campaign For Action On Transport. Bookmark the permalink.