Neo-Nazis on the march in Germany 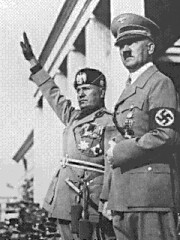 FRANKFURT A far-right party made further inroads in Germany’s economically fragile east on Sunday, winning seats in a state election in Mecklenburg-West Pomerania, a lonely land of farms and fishing villages that is the home constituency of Chancellor Angela Merkel.

The National Democratic Party, which openly espouses xenophobic and neo-Nazi views, was projected to win slightly more than 7 percent of the vote, according to preliminary results. That was less than analysts here had feared, but enough to clear the threshold of 5 percent for seats in the state legislature.

Extreme-right parties will now be represented in three of Germany’s six eastern states – a trend that worries officials and underlines the divide between the country’s eastern and western halves. Far-right parties have negligible support in more-prosperous western Germany.

“This shows the extreme right is a stable and growing force in the east, but it is not an earthquake,” said Hajo Funke, a political scientist at the Free University of Berlin. “It’s not a danger for our democracy.”

The result, however, is a rebuke for Merkel and her conservative party, the Christian Democratic Union, which lost votes in Mecklenburg and fared even worse in the second of the two state legislative elections on Sunday, in Berlin. There, the popular mayor, Klaus Wowereit, led his Social Democratic Party to a comfortable victory.

Voters appeared to be punishing Merkel’s party, 10 months after it squeaked into power in an unwieldy “grand coalition” with the Social Democrats. The Social Democrats, who govern Mecklenburg-West Pomerania, lost ground there, too, and it was not clear whether they could salvage their coalition with the Party of Democratic Socialism, the former East German Communist party.

Merkel, who began her political career in Mecklenburg 15 years ago, has tried to focus attention on the region, inviting President Bush in July for a visit. But the state has one of the highest unemployment rates in Germany, which makes it a breeding ground for extremism, analysts say.

The National Democratic Party, which the German government once tried to ban, won seats in Saxony, a similarly depressed eastern state, in 2004. Another far-right party is represented in Brandenburg, the state that surrounds Berlin.

“The grand coalition hasn’t presented a forceful program to tackle Germany’s problems,” Funke said. “These parties take advantage of the frustration of those who have no chance of a social or economic future.”

One of the few winners on Sunday was Wowereit, who was given a strong mandate as mayor of Berlin, with the choice of renewing his coalition with the Party of Democratic Socialism or forming a new one with the Greens, the largest vote-gainer since the last election, in 2001.

The victory may foretell a greater national role for Wowereit, a 52-year-old lawyer who has become a star in Berlin. His party-going style seems to suit his late-night town, and his disclosure before the last election that he is gay only added to his appeal. On Sunday, Wowereit appeared on stage with his partner, Jörn Kubicki, a neurosurgeon.

With the departure of Social Democratic leaders like Gerhard Schröder, and a lack of other rising stars, Wowereit has made his ambitions plain. “I would like to have more say that I have had in the last five years, when we had to clean up the city,” he said in a recent interview with the German magazine Stern.

Whether he has done so is a matter of debate. Berlin is strangled by debt, a jobless rate of nearly 20 percent and a shrinking commercial base. Wowereit, who is known as Wowi, prefers to focus on its role as a cultural center and tourist magnet. Berlin, he said last year, is “poor but sexy” – a line that has become a tongue-in-cheek slogan for the city.

His opponent, Friedbert Pflüger, a Christian Democratic member of Parliament, tried to portray the mayor as a lightweight. But in a city that rewards flamboyance, Pflüger, an establishment politician originally from the western city of Hanover, never stood a chance.

“Up until now, he hasn’t been a strong voice in politics on the national level,” Uwe Andersen, a political scientist at Ruhr University, said of Wowereit. “He may think this result strengthens his position.”