The second leg of Milo Y’s tour of The Australian Colonies is tonight in Perth. 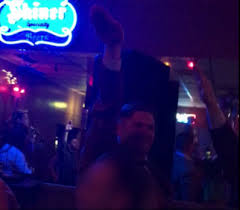 Providing him with a platform on this occasion is Perth Convention and Exhibition Centre [Facebook].

Oddly, while the Centre touts the fact that it’s hosting the ‘Dinosaur Discovery: Lost Creatures of the Cretaceous’ exhibition, it doesn’t advertise the fact that it’s providing a bridge for a Nazi-sympathising paedophile apologist and troll tonight.

In any case, the Centre is owned by the Wyllie Group and managed by Spotless.

The Mercers Wash Their Hands of Milo, Rosie Gray, The Atlantic, November 2, 2017 (‘The conservative billionaire distances himself from the right-wing provocateur, whose reputation has been sullied by reports outlining his ties to white nationalists’):

… Mercer did until recently give financial backing to Yiannopoulos, who has made a career of provocation on race, gender, and other identity issues. BuzzFeed’s recent story included a video of Yiannopoulos singing in a karaoke bar as the white nationalist “alt-right” leader Richard Spencer and others give Nazi salutes. The story also reported that Yiannopoulos’s passwords included references to Kristallnacht, the 1938 anti-Semitic German pogrom that historians mark as the beginning of the Holocaust, and the Night of the Long Knives, the murderous 1934 purge of Hitler’s onetime allies by Nazi paramilitaries.

A source with close knowledge of the relationship between Yiannopoulos and the Mercers said the email leak had been a last straw.

It “showed a complete lack of professionalism,” this person said. Yiannopoulos had already been damaged by his ejection from Breitbart News earlier this year after comments he made defending pedophilia surfaced, and by a failed attempt to hold a “Free Speech Week” on the UC-Berkeley campus. “I’m surprised it didn’t happen sooner,” this source said of the Mercers’ cutting Yiannopoulos off.

I live in Melbourne, Australia. I like anarchy. I don't like nazis. I enjoy eating pizza and drinking beer. I barrack for the greatest football team on Earth: Collingwood Magpies. The 2021 premiership's a cakewalk for the good old Collingwood.
View all posts by @ndy →
This entry was posted in Anti-fascism and tagged Breitbart, Milo Yiannopoulos, PCEC, Perth, Perth Convention and Exhibition Centre, Robert Mercer, Spotless, Spotless Australia, Troll Academy, Wyllie Group. Bookmark the permalink.