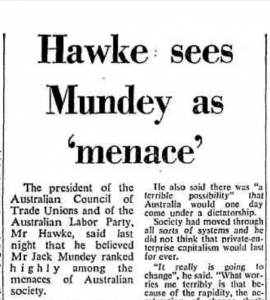 After twenty painful years of struggle the A.L.P. finally succeeded in becoming a government. The event was greeted by the left as a triumph for radicalism and socialism.

The term “radicalism” often creeps into the New Left phraseology. It has been the catchword rallying all forces opposed to the war in Vietnam, to conscription, the Establishment and the Liberal Government. Soon after the defeat of the Liberals, the official termination of the Vietnam War, the end of conscription and the installment of a [Labor] government, radicalism has been quickly absorbed by the A.L.P. The reasons: its objectives were the old authoritarian socialist cliches: capture the state and change it into a weapon of the revolution. The facts: paradoxically, no socialist state is any nearer to socialism. The state is an extension and a creator of class divisions and social antagonism and, as such, is an extension of the bourgeoisie.

The radicals have dispersed, to appear here and there as staunch supporters of the A.L.P.’s policies. As its agents they are trying their quixotic task: to radicalize the Public Service and the Commonwealth Police. Also they are trying to smooth over the antagonism between labour and capital and to stabilize the existing social order. And so they are becoming the spearhead of the bourgeoisie.

Their proclivity to such nefarious activities lies in the radicals’ misconception of radicalism. If we adopt Webster’s definition of radicalism “overturning and changing the existing state of things” then the A.L.P. has no claim to it.

The A.L.P. is a conservative social democratic party. It stands for the stability of capitalism. It supports the existing social order. Its function is to paralyse any revolutionary awareness; to harmonize social antagonisms and thus prevent the workers from seeing through the liberal-bourgeois ideology. It encourages nationalism at the expense of internationalism and thus strengthens the dominant social relationship.

The war in Vietnam, the conscription, the myopic internal and external policy of the Liberals have produced confrontation between the forces of law and order and their opposition. In the process of confrontation there has been observed the awakening of a revolutionary tendency. To prevent such trands [sic] from materializing, the most progressive bourgeois shift allegiance from the Liberals to the A.L.P. Once in power A.L.P. militancy ends in Social Democratic social harmony. Social Democracy today more than ever stands for virulent aggressive neo-capitalism. Where the Liberals have failed labour tries to succeed, as usual at the expense of the revolution.

To speak of the A.L.P. as a socialist party is absurd. A party which preserves the capitalist structure in the mode of production, exchange and distribution cannot be classified, or thought of, as a socialist one. Socialism means workers’ self-management. It means autogestion, direct involvement and participation in the control of production, distribution and the problems of the environment. It means an end to the master-slave relationship, and its corollary: leaders and elitism. Socialism, stripped of its ideological content is pure anarchism. This was clearly understood by the anti-authoritarian sections of the [I]nternational in their congress at Saint-Imier one hundred years ago. They declared:*

1. The destruction of the political power is the first duty of the proletariat.
2. To organize the proletariat in a provisional political party capable of accelerating the destruction of the state is a deception and as dangerous as any of the existing governments.
3. We reject all compromises as a means to achieve the Social Revolution. The proletariat of all countries has to establish the solidarity of revolutionary action outside of all bourgeois politics.

But one may argue that for some socialists, radicals and leftists history does not exist except when it is used as an “historical method” to apologize for the historical function of their dysfunctional socialism and counter-revolutionary social practices. 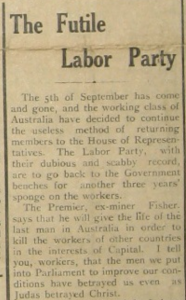 I live in Melbourne, Australia. I like anarchy. I don't like nazis. I enjoy eating pizza and drinking beer. I barrack for the greatest football team on Earth: Collingwood Magpies. The 2021 premiership's a cakewalk for the good old Collingwood.
View all posts by @ndy →
This entry was posted in Anarchism, History, That's Capitalism! and tagged Australian Labor Party, Jack Grancharoff, Red & Black. Bookmark the permalink.