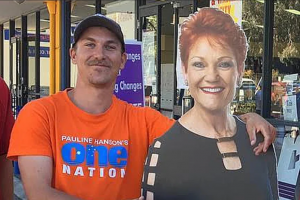 Last week’s episode (#061) was a musical interlude — starring Loikaemie, Manis Loizos, Los Fastidios, Monsieur Jack, Moscow Death Brigade, Marc Ribot & Tom Waits, The Selecter and Ana Tijoux — but on this week’s episode of Yeah Nah, we return to talk to semi-regular guest Jason Wilson [Twitter]. We last spoke to Jason about The Base in January 2020 (#003), but following recent d0x being dropped, we thought it was a good idea to talk a bit more; note that the second part of Background Briefing’s examination of The Base will be broadcast this Sunday.

• Please note that the podcast version of this episode contains a longer disko with Jason.
• You can listen to the podcast on Apple, Spotify and other platforms.
• We also have a Facebook page for the show, which you’re invited to ‘Like’ and to ‘Follow’.
• I have a Patreon account which youse are also invited to support.

I live in Melbourne, Australia. I like anarchy. I don't like nazis. I enjoy eating pizza and drinking beer. I barrack for the greatest football team on Earth: Collingwood Magpies. The 2021 premiership's a cakewalk for the good old Collingwood.
View all posts by @ndy →
This entry was posted in Uncategorized and tagged 3CR, Dr Jason Wilson, Jason Wilson, The Base, Yeah Nah Pasaran. Bookmark the permalink.