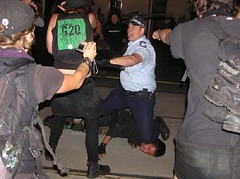 While the corporate/state media bays for (more) blood, to this date there have been only a relatively small number of arrests of G20 protesters reported in the press, and just one name has been released to the public. Today, for example, the Herald Sun claims that there has been a total of seven arrests, although whether or not that includes Akin Sari and Drasko Boljevic is unknown. (Akin Sari’s non-incarceration was deemed to be an ‘unacceptable risk’ to the state at a court hearing on November 22. On that basis Sari was denied bail by Magistrate Sarah Dawes, and was remanded in custody until February 12, 2007. He faces four charges — criminal damage, theft, riot and affray — and is the only person to have appeared before the courts in relation to events at G20.) On Saturday, November 18, The Age reported two arrests, while on Sunday, November 19, The West Australian reported that:

Police have arrested four G20 protesters for assault after they chained themselves to a car near the Victorian parliament in central Melbourne. Police said the protesters caused a crowd disturbance near Spring Street and officers were called about 10pm (AEDT). After protesters scuffled with police, four people were arrested and questioned. One person was drunk, police said. No charges have been laid.

Reporting on the Police vow to find G20 thugs, The Age / AAP (November 19) records Chief Commissioner Christine Nixon as claiming seven arrests in total, including that of Akin Sari, with more to come, and the establishment of a police taskforce, Operation Salver, to vigorously pursue further potential prosecutions.

Today (November 24), ‘The Human Rights Observer Team’ has expressed concern over police violence at G20, in particular the unprovoked assaults committed by police against a peaceful gathering of protesters on Sunday night at Melbourne Museum. (Police G20 behaviour ‘alarming’ — report, The Australian; Concerns over police conduct at G20, The Age: both are AAP reports.)

Sunday afternoon a group of 50 demonstrators were beaten and trampled by police during a peaceful anti-G20 protest inside the foyer of the Melbourne Museum. A woman was severely injured after police used batons and fists to disperse the small group of singing, dancing demonstrators. Several hundred police, including two divisions of riot police, were deployed in the incident… Video | engagemedia

John HoWARd, in the meantime, has reportedly expressed confidence in the ability of state authorities to effectively contain any demonstration at the upcoming APEC Summit in Sydney in 2007 (September 6/7) — an event described by ASIO as being the most important summit of its kind to ever take place in Australia, being graced with the presence of no less a figure than the Australian President, George W. Bush. In other news:

SENIOR police have been accused of not acting on key intelligence about the intentions of anti-G20 protesters.

Sources [– presumably right-wing mavericks –] have told the Herald Sun important details of the masked demonstrators’ plans were made known to top police but not factored into the response.

A police taskforce has been set up to track down those responsible for ugly scenes in which police were bitten, spat on kicked and punched.

Every window in a brawler van was smashed in what Chief Commissioner Christine Nixon called “guerilla tactics”.

But the police sources said the taskforce would not have been necessary if there was a better preparation based on what was known of the protesters’ intentions.

A Victoria Police spokeswoman said the force was satisfied with the approach taken based on available intelligence.

Police in recent days have visited Melbourne media outlets to track down every possible image of those responsible.

At least seven arrests have been made and more are expected over violence as the world’s financial leaders met at the Grand Hyatt.

There has been no shortage of criticism of the policing at G20, largely centring on police tactics: the bloke they call Mullet reckoned they were ‘too soft’, apparently. But if the main objective of the police on the day was to prevent disruption to the conference itself, they certainly succeeded: no protester was able to get within coo-ee of the Hyatt; the assaults upon police barricades were limited and sporadic; and the damage to police vehicle/s an opportunistic act amounting to $1,000. As for injuries to police, possibly 9 or 10 have been reported as suffering some, the main injuries being a suspected broken wrist — presumably incurred by flying debris — and some bitemarks on one unlucky constable incurred during the course of the four arrests on Saturday night outside Parliament.