Redesign My Nazi bRanes; Or: Who Makes The Nazis Today, anti-fascist research group The White Rose Society published a statement regarding an upcoming documentary by TV personality Todd Sampson. It draws attention to a key failing of media reportage on fascism and the far right: uncritically amplifying the views of neo-Nazis. You can also read Tom Tanuki’s thoughts on the matter here. For the record, I too was contacted by the producers, expressed a willingness to talk to them, but … they never got back to me (see also : Romper Stomper Pulls On Its Boots Again (But Forgets To Thread Its Laces), January 13, 2018).

Recently we, and a number of other antifascists, were approached by Rebecca Le Tourneau @becletourneau to discuss a documentary she is producing with Todd Sampson @toddsampsonOz on radicalisation and social media. We agreed to a background chat with her.

Tonight we found out on Telegram that @toddsampsonOz is working on the documentary with two of Australia’s most hateful and violent neo-Nazis, Blair Cottrell and Tom Sewell.

Here is Tom Sewell vague posting about his involvement in the documentary, sandwiched in between a post to celebrate Hitler’s Birthday yesterday. [snip]

Here is Blair Cottrell announcing his involvement in the project by posting a photograph with a smiling @toddsampsonOz (and Tom Sewell in the background of the shot). 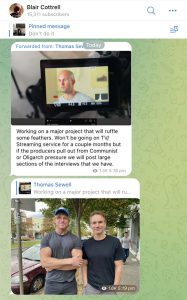 The violent Islamophobic rhetoric of neo-Nazis Blair Cottrell and Tom Sewell and their group the United Patriots Front, were a major factor in the radicalisation of Brenton Tarrant and his act of terror, slaughtering 51 Muslims at prayer in Christchurch.

Brenton Tarrant worshipped Blair Cottrell, which was revealed through his Facebook comment history. Tom Sewell tried to recruit Tarrant to Lads Society, and Tarrant donated money for their gym.
[Blair Cottrell holds a megaphone to his mouth. Many Australian flags are visible in the background.]

National Socialist Network and Tom Sewell have also made repeated Antisemitic and violent threats towards colleagues of @becletourneau and @toddsampsonOz.

The Australian media’s Islamophobic rhetoric and platforming of neo-Nazis like Blair Cottrell, (including on Sky News where @becletourneau was a producer), were also major contributing factors in the radicalisation of Brenton Tarrant and the rise of fascism in Australia.

The Murdoch empire is so desperate to avoid a #MurdochRoyalCommission that they'll take any distraction they can. What's their latest tactic? A "documentary" about me and @TurnbullMalcolm, hosted by right-wing hatchet man Chris Kenny! No thanks, Chrisums, not this time… pic.twitter.com/qOvd0z7KtC

The Australian government and media’s own complicity in the terrorist attacks in Christchurch is yet to be reckoned with in Australia. How many times must we draw the attention of journalists to The Oxygen of Amplification?

We advise any antifascists or academics that have been approached by Rebecca Le Tourneau or Todd Sampson about their documentary to tell them to fuck off. Nothing good can come from providing a platform to violent neo-Nazis. No pasarán.