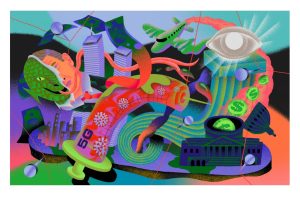 On this week’s episode of Yeah Nah Pasaran! on 3CR we talk to Anke Richter [Twitter]. Anke is a Kiwi-Kraut, freelance journalist and foreign correspondent, taz columnist, lover and writer of books. Anke has also been involved with FACT Aotearoa (Fight Against Conspiracy Theories Aotearoa): ‘a grass-roots activist group made up of volunteers from all professions’ which is ‘committed to fighting against harmful conspiracy theories that harm the very fabric of New Zealand society’.

See/hear also : The anti-vaccination infodemic ‘is a cult’ – researcher, Kirsty Johnston and Michelle Duff, stuff, March 17, 2022 (‘A few years ago cult expert Anke Richter would not have called the anti-vaccine movement a cult. She would now. So what has changed?’) | The extremism visible at the parliament protest has been growing in NZ for years – is enough being done?, Paul Spoonley, The Conversation, March 2, 2022.

• This episode will be available on Apple, Spotify and other platforms after broadcast.
• We also have a Facebook page for the show, which you’re invited to ‘Like’ and to ‘Follow’.
• I have a Patreon account which youse are also invited to support.

I live in Melbourne, Australia. I like anarchy. I don't like nazis. I enjoy eating pizza and drinking beer. I barrack for the greatest football team on Earth: Collingwood Magpies. The 2023 premiership's a cakewalk for the good old Collingwood.
View all posts by @ndy →
This entry was posted in !nataS, Anti-fascism, Death, History, Media, State / Politics, Television, That's Capitalism! and tagged 3CR, Anke Richter, Aotearoa, FACT Aotearoa (Fight Against Conspiracy Theories Aotearoa), New Zealand, Yeah Nah Pasaran. Bookmark the permalink.