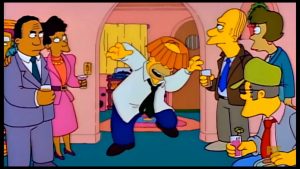 On last week’s episode of the show, Cam and I briefly reviewed and had a yarn about the smol and micro-parties contesting last weekend’s federal election. On this week’s episode of Yeah Nah Pasaran! on 3CR we talk to Crikey’s Cam Wilson [Twitter] about the outcome and how some of the … not-so-nice, different and ah, unusual candidates fared. Speaking of which, while the results are still settling, one aspirant Senator is Ralph Babet in Victoria. According to Cam:

Soon after election night, Babet deleted his UAP campaign Facebook page, Instagram and Twitter account. However, archived posts from these accounts and other online content reveals that his views are well and truly in line with those of his right-wing populist and conspiracy promoting party leader Palmer.

I may write some more about how the far right (and the far left) fared at the ballot box this cycle, but in general results were disappointing for the right: Craig Kelly is not the Prime Minister and (with the possible exception of Babet) the return on Uncle Cliev’s $100 million investment has proven to be meagre. On the other hand, PHONy did at least secure another term for Dear Leader, increase its overall vote and hence — crucially — markedly improve its bank balance. Notably, Josephine Qashman didn’t let (((George Soros))) prevent her from getting a bronze medal in Lyne, while old mate, white nationalist and former Australia First Party flunky Victor Waterson bravely battled for Bennelong, narrowly defeating YouTube micro-celebrity Dougal Cameron. Finally, while Riccardo Bosi‘s plans to deal with traitors may have been delayed, happily, Rod Culleton no longer has to worry about bankruptcy disqualifying him from assuming his rightful place in the Australian Senate.

I live in Melbourne, Australia. I like anarchy. I don't like nazis. I enjoy eating pizza and drinking beer. I barrack for the greatest football team on Earth: Collingwood Magpies. The 2021 premiership's a cakewalk for the good old Collingwood.
View all posts by @ndy →
This entry was posted in !nataS, Anti-fascism, History, Media, Sex & Sexuality, State / Politics, That's Capitalism! and tagged 2022 Australian federal election, 3CR, Cam Wilson, Yeah Nah Pasaran. Bookmark the permalink.