Yeah Nah Pasaran! #118 w Elle Hardy on Beyond Belief: How Pentecostal Christianity Is Taking Over the World : June 2, 2022 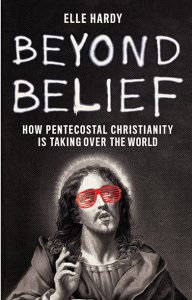 On this week’s episode of Yeah Nah Pasaran! on 3CR we talk to journalist Elle Hardy [Twitter]. Elle is the author of Beyond Belief: How Pentecostal Christianity Is Taking Over the World (Hurst, 2021):

How has a Christian movement, founded at the turn of the twentieth century by the son of freed slaves, become the fastest-growing religion on Earth? Pentecostalism has 600 million followers; by 2050, they’ll be one in ten people worldwide. This is the religion of the Holy Spirit, with believers directly experiencing God and His blessings: success for the mind, body, spirit and wallet.

Pentecostalism is a social movement. It serves impoverished people in Africa and Latin America, and inspires anti-establishment leaders from Trump to Bolsonaro. In Australia, Europe and Korea, it throws itself into culture wars and social media, offering meaning and community to the rootless and marginalised in a fragmenting world.

Reporting this revolution from twelve countries and six US states, Elle Hardy weaves a timeless tale of miracles, money and power, set in our volatile age of extremes. By turns troubling and entertaining, Beyond Belief exposes the Pentecostal agenda: not just saving souls, but transforming societies and controlling politics. These modern prophets, embedded in our institutions, have the cash and the influence to wage their holy war.

I live in Melbourne, Australia. I like anarchy. I don't like nazis. I enjoy eating pizza and drinking beer. I barrack for the greatest football team on Earth: Collingwood Magpies. The 2021 premiership's a cakewalk for the good old Collingwood.
View all posts by @ndy →
This entry was posted in !nataS, Anti-fascism, History, Media, Music, Sex & Sexuality, State / Politics, Television, That's Capitalism! and tagged 3CR, Beyond Belief, Beyond Belief: How Pentecostal Christianity Is Taking Over the World, Elle Hardy, Pentecostal Christianity, Yeah Nah Pasaran. Bookmark the permalink.