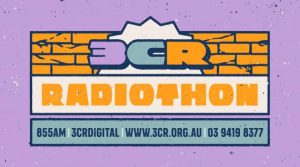 The theme of this year’s radiothon is ‘Keep Community Strong’.

3CR is a dynamic, community hub that has produced radio since 1976.

3CR broadcasters present around 125 radio programs every week, with 20 community language shows in 13 different languages, and 10 hours of Indigenous programming, and listeners can tune in on 855AM, stream live through the web or download podcasts of our shows.

The radio station was established in 1976 to provide a voice for those denied access to the mass media, particularly the working class, women, Indigenous people and the many community groups and community issues discriminated against in and by the mass media.

If you’d like to help keep us and 3CR on air, please consider making a donation.

I live in Melbourne, Australia. I like anarchy. I don't like nazis. I enjoy eating pizza and drinking beer. I barrack for the greatest football team on Earth: Collingwood Magpies. The 2023 premiership's a cakewalk for the good old Collingwood.
View all posts by @ndy →
This entry was posted in Anti-fascism, Media, State / Politics, That's Capitalism!, War on Terror and tagged 3CR, Yeah Nah Pasaran. Bookmark the permalink.