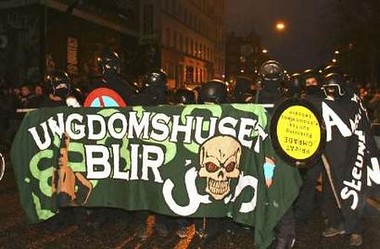 As part of the city authorities’ ongoing campaign to further gentrify and socially cleanse Copenhagen, right-wing Christians in Denmark are determined to evict the squatted social centre Ungdomshuset (‘Youth House’), established in 1982. 1,000 or so pissed-off Danes took to the streets on December 17, in protest at the state’s recent endorsement of the Christians’ plans, and were attacked by police.

A few pushed back…

About 1,000 demonstrators had gathered in the Danish capital to protest against court rulings ordering a group of young squatters to leave a downtown building and hand it over to a Christian congregation that bought it five years ago…

I live in Melbourne, Australia. I like anarchy. I don't like nazis. I enjoy eating pizza and drinking beer. I barrack for the greatest football team on Earth: Collingwood Magpies. The 2021 premiership's a cakewalk for the good old Collingwood.
View all posts by @ndy →
This entry was posted in !nataS, Anarchism, History, State / Politics. Bookmark the permalink.