Moffat, AFP, and those BLOODY FOREIGNERS! 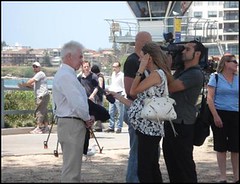 Aged-care worker and veteran bigot John Moffat is standing for the seat of Cronulla in the upcoming NSW state election on March 24. The fifty-something(?) Moffat is standing as an ‘independent’, but is campaigning with the endorsement and full support of the Australia First Party — a deregistered (2004) political party established by former ALP (1980–1995) MP Graeme Campbell in 1996, dedicated to reconstructing a White Australia, and currently led by the neo-Nazi Dr. James Saleam. (One of the more, er, curious facts about Saleam is his ancestry, widely speculated among local fascists as being… Lebanese!) As noted by Roberts (below), the first anniversary of the ‘Cronulla uprising’ was marked by Moffat and his mob by attending Cronulla beach and pestering locals with badly-written racist pamphlets:

[On December 11, 2006] the only people looking for a repeat was the Australia First Party, whose members were hoping for a big rally. They were disappointed by the poor turnout, and without an audience to address, the 20 [?] supporters — including the former Australian National Socialist Party deputy director, Ross May (also known as The Skull)* — could only hand out leaflets for John Moffat, the party’s hope to defeat the incumbent Liberal MP for Cronulla, Malcolm Kerr, in the election in March.

Mr Moffat, who waited on the beach for about 90 minutes to address any spontaneous rally before leaving when the crowds failed to eventuate, said Australia First would still attempt to build on the momentum of concerns about multiculturalism illustrated by last year’s riot.

“Of course, we would have liked a crowd, but we’ll hold some public meetings around Sutherland after Christmas,” he said. 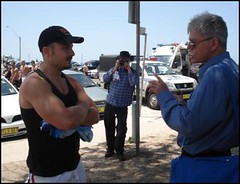 The Cronulla anniversary — aside from highlighting the clash between Saleam’s political ambitions and reality — was a much milder affair than fascists were otherwise dreaming of, whether in Brunswick or Cronulla. As The Daily Telegraph reported:

The only race clash yesterday came between Australia First’s Dr Jim Saleam and Mat Henderson-Hau of the anti-racist Fight Dem Back group.

The two had a fiery vocal exchange.

Mr Henderson-Hau later laughed it off, saying it was “fun” winding up Australia First members. However he said he wasn’t there to cause any trouble. “I came down to have a swim and to see how many of them turned up and who they were,” he said.

“Looking around I’m not seeing that, are you?”

Still, the pathetic level of support for AFP in Cronulla must also be measured against the party’s success in Adelaide, where accountant Bruce Preece obtained a seat on Prospect City Council in October, having secured 341 votes. Moffat himself previously stood for the AFP in March 2003, and received 814 votes for his trouble. (Oh, Moffat also stood for another racist mob called Australians Against Further Immigration in the NSW seat of East Hills in 1995 (receiving 2,460 votes or 7.3%) and again, this time halving his vote (1,369 votes or 3.4%) in 1999.) Based on Preece’s performance, AFP only require another 11,208 votes to equal the ALP’s effort at the 2003 election, or — if they’re truly ambitious — 18,328 votes to equal sitting MP Malcolm Kerr.

And looking around I’m not seeing that, are you?

Note: Ross May is an old school neo-Nazi whose heyday, like Saleam’s, was in the 70s and 80s — though he remains one of Saleam’s closest comrades. In addition to his height, bald head, and pathological hatred of Jews, May is (was) known for employing stand-over tactics towards leftists (and other ‘degenerates’), as well as for wearing Coke-bottle glasses. On which point, it is surely a measure of the gentlemanly demeanour of leftist builders’ labourers that when, on one occasion some years ago, May found himself sharing a police lock-up with several of these gentlemen, they asked him to first remove his spectacles before the group then proceeded to engage in a full and frank discussion of May’s political beliefs…

In a posting on National Vanguard, which is linked to well-known Holocaust denial and white supremacist groups, Mr Moffat said Australian women were at risk of “racially motivated pack rapes” perpetrated by Lebanese Muslims.

He said Sydney had become a dangerous city because of Lebanese immigrants; young Lebanese gangsters “hate Australia and Australians with an intensity that would peel paint”.

The postings by Mr Moffat, whose poll campaign in the Sydney seat of Cronulla is backed by the Australia First Party, prompted a united response from Lebanese and Jewish community leaders.

Lebanese Muslim Association spokesman Jihad Dib said he was disturbed by the messages published by Mr Moffat and the nature of the websites he was using.

“It worries me that we have got to the stage where people do this kind of thing and it is just accepted as OK,” Mr Dib said. “People are working hard to provide solutions to problems we have had, and these divisive ideologies are not helpful.”

B’nai B’rith Anti-Defamation Commission chairman Michael Lipshutz said Australian Muslims and Lebanese should not be subjected to the kind of attacks being mounted by Mr Moffat.

“It’s not a matter of free speech when what you are doing is inciting racial hatred,” Mr Lipshutz said.

“He is trying to appeal to the lowest common denominator by feeding on the fear of people.”

Mr Moffat said the southwest Sydney suburb of Cabramatta was known to locals as Vietnamatta, and drive-by shootings were common there. In another posting, Mr Moffat described as a “half-breed” the part-Filipino Australian model Michelle Leslie, who served three months in an Indonesian jail in 2005 for drug possession.

He said: “She looks better – that is to say, more European – than many such mixed women.”

Mr Moffat has based his campaign for the March election on support for what he describes as a “civil uprising of the Australian people” – the December 2005 riots at Cronulla, when Lebanese youths were attacked by drunken young white men.

His election manifesto says the riots were “spontaneous” in contrast to the “ruthlessly cold and malicious” retaliatory attacks on Sydney neighbourhoods by Lebanese gangs.

But Mr Moffat is unrepentant. “I, along with many others, am concerned about the survival of the white race,” he told The Australian yesterday.

“It is true that Sydney is becoming dangerous because of these people. There is widespread community support for what I am saying.”

8 Responses to Moffat, AFP, and those BLOODY FOREIGNERS!