G20: According to Newscorpse // FN: Internet geeks steal my heart

Yanqui citizen (since 1985), champion of journalistic freedoms, and owner of Newscorpse Rupert Murdoch‘s most widely consumed Orstralian newspaper the Herald Sun has an ‘In-depth Report’ on the cowardly thugs who held Melbourne to ransom last November. It also contains reportage on unsuccessful attempts by citizens gathered outside of the Hyatt to have a word or two with some of the leading architects of global capital (de-)regulation gathered in corporate luxury within.

Hang your washing on the line
It’s okay, the weather’s fine
Your hubby goes out, don’t commit no crime
He always gets to work on time 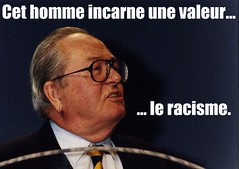 W. James Au has written a really entertaining account (Fighting the Front, January 15, 2007) of a political struggle against attempts by French fascists and members of the Front National to infiltrate the online world of Second Life. It’s fuckin’ hilarious: the FN’s virtual HQ was attacked by good ol’ Thomas the Tank Engine, among others, and “One enterprising insurrectionist created a pig grenade, fixed it to a flying saucer, and sent several whirling into Front National headquarters, where they’d explode in a starburst of porcine shrapnel”! Ha ha ha! The fascist wankers were eventually forced to flee their HQ, and have since set up shop in another quarter (see below).

See also : Exploding pigs and volleys of gunfire as Le Pen opens HQ in virtual world, Oliver Burkeman in Porcupine, The Guardian, January 20, 2007 — note that ‘The Guardian‘s avatar… tracked down the Front National to Axel, another region in Second Life, where they had rebuilt their headquarters and were engaging a handful of opponents in relatively restrained debate. “Le Pen is the son of Hitler,” one protester ventured. “I know lots of people descended from immigrants who vote for the Front National because they’re not ashamed to be French,” a moronic Le Pen supporter countered, “and I think you’ll be surprised at how many people of an… immigrant background vote for Le Pen at the next election”.’ | Second Life bears political protest against right wing group, Mike Bantick, iTWire, January 21, 2007

I live in Melbourne, Australia. I like anarchy. I don't like nazis. I enjoy eating pizza and drinking beer. I barrack for the greatest football team on Earth: Collingwood Magpies. The 2023 premiership's a cakewalk for the good old Collingwood.
View all posts by @ndy →
This entry was posted in !nataS, Anti-fascism, Media, State / Politics. Bookmark the permalink.

5 Responses to G20: According to Newscorpse // FN: Internet geeks steal my heart