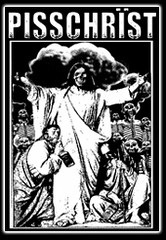 At first I thought the pair may have been ‘undercover’ police, but I suppose I should’ve guessed that, given Tinkler’s diminutive stature, it was more likely that they were simply hacks. Which is not to suggest that police and other agencies don’t routinely monitor ‘anti-capitalist’ protests, events and organising projects: they do. Thus the suspicions of ‘student leaders’ in Sydney are very well-founded, as a garbled report in today’s SMH indicates (‘Fears of uni spies after five charged over G20 violence’, John Kidman, Sydney Morning Herald, March 18, 2007).

DRUG use and under-age drinking have been exposed at a wild [wild!] “all-ages” benefit gig for rioters charged over Melbourne’s G20 protests.

Children as young as 10 slugged beer in front of their dazed parents, a mother smoked cannabis beside a pram containing her baby and youths openly snorted powder off a table at Friday night’s event.

The Sunday Herald Sun also found traces of drugs including cocaine, amphetamines and cannabis in all of the [two] toilet cubicles. The tests were conducted with Securetec DrugWipe kits, used by customs officers and police.

The $5-a-head event was run to raise funds for protesters arrested over the riots during the summit of the world’s financial leaders in November.

Police were [allegedly] bitten, vehicles [sic] smashed and barricades and other objects thrown at officers as demonstrations degenerated into chaos.

About 300 people attended the G20 Arrestee Legal Solidarity Benefit Gig, which raged [raged!] until the early hours yesterday in a former lingerie [oo-er!] factory in Brunswick.

But anti-capitalist chanting and police-baiting that characterised the G20 riot were absent — replaced by drunken and drug-fuelled debauchery.

The landlord of the Pitt St venue, rented by a collective, said he had not been told of the gig, which featured punk rockers Pisschrist.

THOUGHT OF MEAT MAKES ME SICK
GOTTA GET MY TOFU FIX

THOUGHT OF MEAT MAKES ME SICK
GOTTA GET MY TOFU FIX

The party was advertised through message boards on activists’ websites, with charged Monash student Akin Sari helping to promote it.

Police are bracing for more violence [ie, YOU HAVE BEEN WARNED! — and police have a ready excuse for any violent assaults they commit] on Tuesday, with protests [sic] planned outside Melbourne Magistrates[‘] Court where four alleged G20 rioters, who were arrested in Sydney dawn raids last Wednesday, are due to appear.

The Sunday Herald Sun revealed this month the Bracks Government had agreed to a secret $700,000 [sic] payout to [47] protesters [of which $600,000 went to the struggling law firm Slater & Gordon] who clashed with [ie, were assaulted by] police in the S11 [police] riots outside the World Economic Forum in 2000.

The Sunday Herald Sun‘s editorial, meanwhile, after making some limp criticisms of this year’s Big Dick — the twelfth year in a row Melbourne has been forced to suffer a corporate-fuelled yuppie invasion — opines the following regarding ‘Protesters’ hypocrisy’: “WIDESPREAD drug use at a party to raise funds to pay legal fees for G20 protesters makes a mockery of their claims to the high moral ground. They laugh at the law and the community they pretend to represent.” Apart from not making any sense, it’s a public secret that Big Dick brings not only a fabulous boost in clientele for local brothels, but (gasp!) the drug trade too. But of course, the chances of the Herald Sun engaging in an investigative report regarding the manner in which rich folks and yuppies celebrate the occasion — perhaps by attending one of Ron Walker‘s parties — is about as likely as “Jamie” being a real person instead of a figment of some PR hack’s imagination.

See also : ‘Hill & Knowlton Confidential Report On S11’, Scoop.nz, September 5, 2000. Interestingly, Hill & Knowlton‘s embarrassingly misleading and simple-minded attempt to drum up business claims that prior to S11 the WEF’s last meeting took place in Seattle in 1999; an error still being compounded six years later by a local ‘expert’, Luke Howie. Note that Hill & Knowlton — established in 1927 by a former hack, John W. Hill, in conjunction with a banker, Donald Knowlton — is reportedly one of the world’s leading PR firms (corporate / state propaganda machines), is notorious for selling the first Gulf War, and has been a subsidiary of the ‘communications’ conglomerate WPP since 1987.

I live in Melbourne, Australia. I like anarchy. I don't like nazis. I enjoy eating pizza and drinking beer. I barrack for the greatest football team on Earth: Collingwood Magpies. The 2021 premiership's a cakewalk for the good old Collingwood.
View all posts by @ndy →
This entry was posted in !nataS, Anarchism, Media, Music, State / Politics. Bookmark the permalink.