“Extremists planning to disrupt next month’s Group of Eight summit of the world’s richest nations could be placed in preventative custody ahead of the meeting, German Interior Minister Wolfgang Schäuble said Friday”; and despite the enormous carnage state figureheads from the Group of Eight — Canada, France, Germany, Great Britain, Italy, Japan, the United States and Russia — are responsible for, I’m pretty sure Schäuble is referring to people with an extreme aversion to war and oppression (Interior Minister Advocates Preventative Custody for G8 Rowdies, Deutsche-Welle, May 11, 2007). Wolfgang’s warning comes just days after German authorities launched pre-emptive raids on a number of anti-G8 organising projects (with a view to disrupting protest activities in June), and has also been accompanied by reports in the German press that a number of marches scheduled to take place on June 7 will likely be deemed unlawful assemblies. As remarked upon elsewhere, such measures, unfortunately, are no guarantee that members of the European polity aren’t slightly rowdy in making their demands of the G8 (ranging, one imagines, from ‘Please sir, can we have some more?’ to ‘Fuck off and die!’).

Speaking of which, when the G8 met in 2005, the heads of state gathered in Gleneagles apparently made some kinda agreement to increase ‘development assistance’ to the ‘Third World’. An agreement which last month was declared to have been broken by the body monitoring its implementation: “Almost two years after the G8 group of leading industrial nations promised to boost development assistance by $50bn a year by 2010, the Africa Progress Panel headed by the former UN secretary-general Kofi Annan said rich countries were only 10% of the way to their target” (Larry Elliott and Kate Connolly, In 2005, G8 pledged $50bn for Africa. Now the reality, The Guardian, April 25, 2007).

And speaking of extremist noise terror, Irish multi-millionaire and British establishment figure Bono Bloody Bono has vowed to continue to bore the world with his hat, his glasses, and his complete failure to understand anything to do with issues of wealth and poverty, by again appearing on stage during the G8, on this occasion alongside some Deutsche Geräuschhersteller for a brief rendition of Deine Stimme gegen Armut (Your Voice against Poverty). Hopefully, Paul David Hewson can provide the audience in Rostock, as well as a much vaster audience in Africa, with a few tips on how to avoid falling into that desperate trap; a fate which he has quite spectacularly avoided. Perhaps something along the lines of… 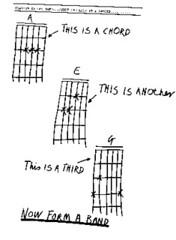 I live in Melbourne, Australia. I like anarchy. I don't like nazis. I enjoy eating pizza and drinking beer. I barrack for the greatest football team on Earth: Collingwood Magpies. The 2023 premiership's a cakewalk for the good old Collingwood.
View all posts by @ndy →
This entry was posted in !nataS, Anarchism, Anti-fascism, State / Politics, War on Terror. Bookmark the permalink.