G8: Stay in your homes; you’ll only get hurt 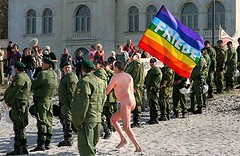 David Gordon Smith, G-8 Raids ‘A Warning Shot to Intimidate Activists’, Der Spiegel, May 10, 2007: “German observers feel that police raids on anti-globalization activists Wednesday were aimed at intimidating protesters ahead of the G-8 summit in June, with some commentators writing that the operation was too heavy-handed…” Police in Germany have conducted a number of raids in Berlin, Bremen and Hamburg today, in what is presumably the beginnings of a wave of pre-G8 summit repression. Rupert Murdoch’s man on the spot is Roger Boyes, and Roger reckons that German police fear that “a new brand of left-wing terrorism is about to ignite in Germany, triggered by the swelling protest movement against the G8 summit next month”. The danger has been exacerbated by the alleged presence of a number of RAF members at a May Day demo; “Bearded, grey but unrepentant, the old terrorists, now in their late 50s, are coming out to pass on tips to the new generation” (Leftist terror groups ‘to strike at G8’, The Times, May 10, 2007).

BERLIN: Hundreds of German police on Wednesday raided the offices and apartments of left-wing activists suspected of planning to disrupt next month’s Group of Eight summit, leading security officials to tighten border controls ahead of the gathering.

The crackdown was an attempt to ward off the violence that has marred past summits, particularly in 2001 in Genoa, Italy, when police and protesters clashed in the streets for days.

Prosecutors said they were investigating more than 18 people suspected of organizing what they called a terrorist group that planned to carry out firebombings and other violent attacks.

Some 900 federal and local police officers in cities including Berlin, Hamburg and Bremen searched about 40 premises used by several anti-globalist groups, they said.

“The militant extreme left groups and their members are suspected of having founded a terrorist group, or of being members of such an organization, with the specific goal of staging fire bombings and other violent attacks in order to disrupt or prevent the upcoming G-8 summit in Heiligendamm,” federal prosecutors said in a statement.

“As part of security measures for the G-8 summit in Heiligendamm, controls can be carried out on various border points … to prevent potential criminals and others intending to use violence from entering Germany,” the ministry said in a statement. “Particular attention will be paid to potentially violent anti-globalization activists.”

People can usually travel freely throughout the European Union once they cross its common border, but individual countries maintain the right to tighten checks for security purposes.

German security officials have built a €12.5-million (US$17-million) fence around the northern seaside resort of Heiligendamm, hoping to keep protesters away from the event, hosted by German Chancellor Angela Merkel. The leaders of the United States, Russia, Britain, France, Italy, Canada, and Japan are to attend.

Last year’s meeting in St. Petersburg, Russia, saw few protest[s], and those that were held were generally small, largely due to protesters’ difficulty obtaining entry visas. But Germany is easier to reach from other European countries, and security officials do not want a repetition of the violence from Genoa in which one protester was killed by police.

Federal prosecutors said they had focused on dismantling a particular server [so36.net] where they said many leftist groups and projects maintained their Web sites and mailing lists.

Activists complained the raids were aimed at silencing legitimate protests against the G-8. Marches are planned — with official permission — in nearby Rostock ahead of the summit.

“The only point of these searches is to criminalize and disrupt the protests against the G-8,” the Anti-Fascist Leftists of Berlin said in a statement. “The accusation that terrorists would coordinate their movements through a leftist-run Internet server is ridiculous.”

In December, anti-G-8 activists splashed paint on a hotel in Heiligendamm and security officials in Hamburg cited a number of other lower-scale attacks, including several firebombings there and the torching of a car belonging to a top Finance Ministry official.

Some 900 security officials were searching 40 sites in Berlin, Brandenburg, Hamburg, Bremen, Schleswig-Holstein and Lower Saxony, the federal prosecutor’s office said in a statement, adding it had opened two separate investigations.

“We suspect those targeted, who belong to the militant extreme-left scene, of founding a terrorist organization or being members of such an organization, that is planning arson attacks and other actions to severely disrupt or prevent the early-summer G8 summit in Heiligendamm from taking place,” the prosecutor’s office said.

German Chancellor Angela Merkel will host the leaders of Britain, Canada, France, Italy, Japan, Russia and the United States at the June 6-8 summit, which will focus on climate change, African poverty and economic cooperation.

Interior Minister Wolfgang Schaeuble announced a tightening of border controls ahead of the G8 summit. The actions are similar to those taken by Germany during last year’s World Cup tournament to prevent an influx of soccer hooligans.

“We are particularly focused on dangers arising from violent globalization opponents,” the ministry said.

Prosecutors suspect the left-wing militants they are investigating of being behind nine minor attacks in the Hamburg area and three in the Berlin region in the past two years.

Those attacks include an incident last December when a car was set on fire in front of the home of deputy finance minister Thomas Mirow and windows and walls of his house were splattered with paint.

Anti-G8 group “Gipfelsoli” denounced the raids, accusing authorities of a “wave of repression” to dismantle the movement’s communication network

“All attempts to criminalize us do not change the fact that we will use the G8 (summit) to cast a spotlight on the injustices of this world,” Hanne Jobst, a Berlin-based member of the group said in a statement.

Germany has not experienced any major left-wing violence since the militant Red Army Faction (RAF), which waged a bloody two-decade long campaign of killings and kidnappings, announced in 1998 that it was disbanding.

But authorities are taking aggressive pre-emptive measures to ensure the summit goes as smoothly as the World Cup did.

A 2.5-metre high steel fence, topped with razor wire, has been placed in a 14-km ring around Heiligendamm and police will control access through airport-style X-ray machines.

Around 40 km down the coast from the Kempinski Hotel where the leaders will meet, officials in the city of Rostock are expecting a demonstration of up to 100,000 people on the weekend before the event.

At 8am on Wednesday morning a wave of searches took place against left structures throughout Germany. Those targeted were social projects and individuals that are organizing against the coming G8 summit — or suspected of doing so.

In Berlin, at least seven flats and office spaces were searched, including two offices in Bethanien, a social centre in Kreuzberg, Berlin, and the Fusion shop in the same district. The latter is a space used by an anti-fascist organization and the Interventionist Left [‘The “Interventionist Left” within which many autonomous and anti-fascist groups are organized, is part of the alliance, and it openly announces: “All forms of action are legitimate”.’]. Further, a bookshop in Mehringhof and the office spaces of several alternative media projects in Lausitzer Straße have been searched.

The criminal investigation police are placing special emphasis on the alternative Internet server so36.net. Many left and alternative projects have their websites, mailing lists and mail addresses hosted there. In this way, the communication structure of the anti-G8 movement has been hit on a crucial nerve centre.

In Hamburg, the repression is aimed against the social centre Rote Flora and diverse housing projects. Also in suburbs surrounding Berlin searches are taking place. And there are also reports of searches in the city of Bremen.

The orders for the searches are based on §129a: “Formation of a terrorist association with the aim to stop the G8 summit”. The seemingly random selection of many left housing and infrastructural projects makes clear that the investigation is being used in order to weaken the mobilization against the G8. “Probably diverse cases of property damage serve as an excuse for these investigations”, according to the Campinski Press Group. One of these cases occurred at the Kempinski Hotel, where the G8 summit is going to take place. The hotel was targeted with paintballs some months ago.

The context provided by the §129a investigation is being used in order to gather data about the protest movement. Besides, such measures have — most likely intended — intimidating effects. Only 2% of all §129a investigations result in sentencing.

However: “Who invites the G8 summit, also invites the protest against it”, maintains Hanne Jobst of the Berlin Bethanien office. “All attempts to criminalize this movement will not prevent us from exposing worldwide inequalities during the G8 summit”.

The repressive acts of the criminal investigation police are not entirely surprising. The left and radical left resistance against the G8 has reached an uncontrollable level for the police. “So far, the police only tried to split the resistance in the public media through hallucinating about an army of ‘anarchists’. Now they will try to sabotage the organizational structures”, Jobst explains further.

“It is noteworthy that the searches are targeted against all those parts of the resistance that refuse to direct claims to the G8, because they refuse the G8 in general as an illegitimate institution”, explains a spokesperson for Gipfelsoli Infogruppe.

See also : The Approaching G-8 Summit: Big Trouble in Little Heiligendamm, Marcel Rosenbach, Gunther Latsch and Markus Deggerich, Der Spiegel, May 9, 2007: “…the largest police operation in the history of the German Federal Republic will transform the fenced in enclosure around Heiligendamm into the equivalent of a maximum-security prison” | Following Raids on Wednesday, G-8 Opponents Take to the Streets, Der Spiegel, May 10, 2007: “Thousands of G-8 opponents staged demonstrations across Germany on Wednesday evening, with the protest in Hamburg turning violent. The demos followed police raids on left-wing activists…”

I live in Melbourne, Australia. I like anarchy. I don't like nazis. I enjoy eating pizza and drinking beer. I barrack for the greatest football team on Earth: Collingwood Magpies. The 2021 premiership's a cakewalk for the good old Collingwood.
View all posts by @ndy →
This entry was posted in Anti-fascism, State / Politics, War on Terror. Bookmark the permalink.