Lots of twisting and turning around the world: in Birmingham, in Santiago, and in Melbourne.

In Birmingham, the League of Gentlemen have been busy defending England from Muslim hordes. The Gentlemen deny being racist, or fascist, or right-wing —

[Lady] Leisha Brookes, from the EDL, said: “We are p[r]otesting against Sharia Law and the acceptance by our Government of Islamic extremism. It is unfortunate that it has come to this but we are a [multi] faith group who are just trying to protest against extremism.” She insisted that she did not want to see any violence and that the group were not fascists.

— but others appear to disagree.

From this distance, it seems that the EDL consists largely of what Mick Armstrong (of the Trotskyist group Socialist Alternative) labeled some G20 protesters in Melbourne as being: football hooligans. Further, patriotic football hooligans, pissed-off at what they believe are the presence of too many Islamic mentalists in cities like Birmingham (and Luton and London and Manchester and…).

The League was kick-started in March, in response to the antics of some mentalists at a homecoming parade of British soldiers (Muslim protest at Luton Army parade was ‘upsetting’, says senior officer, Daily Telegraph, March 11, 2009). Later, the same ‘Extremists behind anti-war protest driven off the streets by moderate Muslims’ (Norfolk Unity/Daily Mail, May 29, 2009).

In Santiago, crazy kids have commemorated the election of Salvador Allende in 1973 by throwing stuff:

36 years ago, on September 11 from 1973, a coup coordinated in the US and made in Chile started 17 years of dictatorship. During that time, several people was assassinated because their political beliefs. After 1990, the elected presidents were back… and the [government] alliance has the executive power since then. After almost 20 years of self-called democracy, we have been seeing several people dying too, and most of the social struggles tried to but [shut] down by police and media. After this 20 years we haven’t been able to find social justice, and even the crimes against [C]hilean people during the dictatorship are not been taking seriously by the state.

20 years is just too much time… 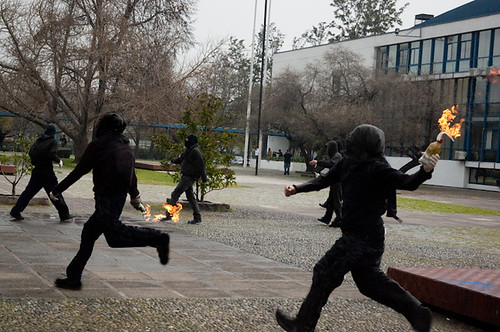 In Melbourne, I and over 80,000 others attended a rather poor demonstration of Australian Rules football, conducted by St Kilda, but mostly by Collingwood. Very disappointing, but hopefully not to be repeated next Caturday when (the) Magpies meet (the) Crows.

Collingwood will limp into a sudden-death AFL final against Adelaide next weekend without star onballer Scott Pendlebury and veteran forward Anthony Rocca – both of whom have suffered likely season-ending injuries.

In other bad news, an oil spill off the Kimberley coast. Sea birds, turtles and sea snakes are not happy, but fish are largely unaffected.

All understand the price of progress.

I live in Melbourne, Australia. I like anarchy. I don't like nazis. I enjoy eating pizza and drinking beer. I barrack for the greatest football team on Earth: Collingwood Magpies. The 2021 premiership's a cakewalk for the good old Collingwood.
View all posts by @ndy →
This entry was posted in Broken Windows, Collingwood, State / Politics, War on Terror and tagged Allende, Chile, English Defence League. Bookmark the permalink.