Exploring the case for armed struggle? Re-framing the Urewera 17

If an [armed] uprising is being considered in New Zealand, what are the reasons and what will it mean, asks CHRIS TROTTER. 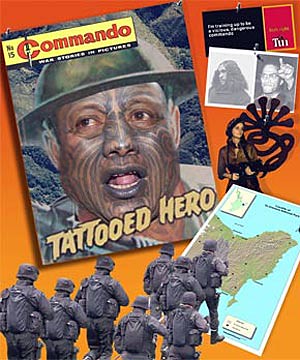 “MURKY PEDIGREE: History is littered with groups who have taken up arms in an attempt to bring about their political or anarchic claims.”

At least, so says the caption accompanying the above graphic in Chris Trotter’s recent article in the Independent Financial Review (Exploring the case for armed struggle, October 24, 2007). In this context, note that history is also littered with journalists who have taken up a tendentious line of argument in an attempt to bring about their personal monetary gain: Trotter’s article is a classic example; the text below is a response.

In essence, Trotter’s argument is that there’s a widening gulf between (bad) radicals and (good) moderates on the New Zealand left, and that the chief significance of the recent police raids lies not in the personal and political ramifications for those arrested, but in the role of the raids in exposing and entrenching this rift. Apparently, this is largely because the raids force individuals to pick a side:

Police raids. Terrorism. Yes or no?

No, not a very sophisticated analysis, but yes, one which does have the virtue of allowing Trotter to trot out references to the ANC, the Provos, the Weathermen, Baader-Meinhof and (one of my personal favourites) the Symbionese Liberation Army:

“Death to the fascist insect that preys upon the life of the people!”

Note that Trotter invokes these disparate (non-state terrorist/armed struggle) groups in the context of a number of alleged firearms offences, committed by a group dubbed the Urewera 17. Further, that today police raided a house belonging to an elderly trade unionist named Jimmy O’Dea, apparently searching for a knife and — Eeek! — trousers (see Maori Yesterday: Trade Unions Today?). Which assault prompts what is for me another, equally obvious — and equally pressing — question:

If an armed uprising is being considered in New Zealand, what kind of trousers will the terrorists wear and what will it mean, asks SLACKBASTARD.

That said, according to Trotter, the central question dividing the Left (apart from trousers) is that old chestnut “Reform or revolution?“. Or to put it another way: “Do [the Left] see their society, and its manifold shortcomings, as being redeemable by the normal processes of constitutional government? Or, has New Zealand society passed beyond all hope of democratic redemption?” This question is given further impetus by the widespread belief, particularly among environmentalists, that humanity is fast approaching an ecological crisis of terminal proportions. Thus in both the Greens and the Maori Parties “…there is a potent strain of millenarian (and even apocalyptic) thinking: a conviction that we have entered or are about to enter a period of fundamental and irrevocable change, during which the institutions and patterns of thought and behaviour that have dominated people’s lives for centuries will pass away forever”.

And of course, a crisis of such proportions bolsters the argument that equally drastic solutions must be obtained: “Nothing less than wholesale systemic change will suffice”. Further “On the fringes of this millenarian grouping, Deep Green radicalism inevitably begins to shade into the darker hues of eco-anarchism“.

That being the case, it is entirely justifiable both ethically and politically to attack and seek to destroy the repressive society by which [the bad radicals] are persecuted and oppressed. More chillingly, they argue that none of those who, by their silence and inaction, are seen to endorse society’s evils should be deemed guiltless. And if everyone is guilty then everyone is a potential target.

Out of this dark green substance come the Urewera 17 — “Tuhoe separatists and eco-anarchists… in some sort of insurrectionary folie a deux“. This, supposedly, is the psychosocial dynamic that must have generated the 17, one which constitutes a basically psychotic response to the failure of their extreme demands for fundamental change to generate popular support, and to which, Trotter argues, the only alternative is “to abandon the fight and to sink back into passivity”. Further, the greater this failure to connect is, the more likely a violent response — terrorism — is going to be triggered: “This is the sort of thinking that spawned the Weathermen and the Baader-Meinhof terrorist organisations of the 1960s and 1970s”.

Well, kinda… but not really. Thus if you examine the actual list of targets ‘Baader-Meinhof’ — a/k/a the Red Arrmy Faction — compiled, it largely consisted of members of the military, industrial and political elite: generals, captains of industry and party leaders; not chaffeurs, factory workers, and nurses. Further, the emergence of both the RAF and the Weathermen owes a great deal more to the impact of Marxist-Leninist orthodoxies upon the New Left and 1960s counter-culture than it does, say, indigenous rights activism or a radical ecological sensibility (that is, the ideologies associated with those whom the police have targeted as ‘terrorists’).

Finally, while police, politicians and, it seems, Chris Trotter, have been happy to label those arrested as ‘terrorists’, police are yet to lay any charges for ‘terrorist’ offences. And of course, the laying of charges does not equal guilt. Further, given the seriousness of such charges — as in numerous other countries, specifically ‘anti-terrorist’ legislation was introduced to New Zealand following the attacks upon New York and Washington in 2001 (see Terrorism Suppression Act 2002 and Amendment Bill 2007) — a prosecutorial state is compelled, at least in theory, to produce very compelling evidence.

At the moment, however, it appears that the trousers simply don’t fit.

See also : Reading the Maps, The threat to your civil liberties – and your trousers, October 25, 2007 for some sensible disco…

I live in Melbourne, Australia. I like anarchy. I don't like nazis. I enjoy eating pizza and drinking beer. I barrack for the greatest football team on Earth: Collingwood Magpies. The 2021 premiership's a cakewalk for the good old Collingwood.
View all posts by @ndy →
This entry was posted in !nataS, History, Media, State / Politics, War on Terror. Bookmark the permalink.

3 Responses to Exploring the case for armed struggle? Re-framing the Urewera 17