Another Evil & Dangerous Woman Does Not Pass Go, Does Not Collect $200

[Update : Ex-member of German far-left group gets suspended sentence for failed bombings, AP, International Herald Tribune, April 16, 2007; Radical Left-Wing Feminist Given Suspended Jail Term, Deutsche Welle, April 16, 2007; Tony Paterson, Germany’s ‘Red Zora’ terrorist spared jail, The Independent, April 17, 2007: “Prosecutors agreed to a minimum sentence, mainly because unlike Germany’s other 1970s left-wing terrorist gangs, Red Zora successfully ensured that no one was harmed in the 45 attacks the organisation carried out between 1977 and 1995… Gershäuser left court yesterday to resume a normal life, her militant past a tiny footnote in history. Yet Red Zora’s reputation seems destined to live on. Montenegro, a state newly emerged from the tragedy of the Balkans, has made the story of the daring orphan girl [and source of the group’s name from the 1941 book Die rote Zora und ihre Bande by Kurt Held] the subject of its first full-length feature film. It is due to reach cinema screens this autumn.” See also : Red Dawns, a “non-hierarchical, non-exploitational and anti-capitalist” women’s festival (also) newly emerged from the ‘tragedy’ of the Balkans…] 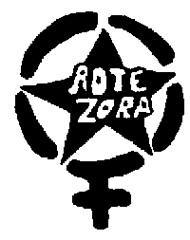 Last month, Brigitte Mohnhaupt, a former member of Germany’s Red Army Faction, was released from jail after spending 24 years behind bars for her involvement in a number of attentats. Today-ish, Adrienne Gerhäuser, a former member of another German group, Rote Zora, goes to trial after turning herself in to German police in December last year, after many years on the run:

…The 58-year-old defendant… presented a statement saying that she had “knowingly and willingly” attempted to bomb the Berlin Genetic Technical Institute in 1986 and a clothing factory in Bavaria in 1987 on behalf of the far-left organization Rote Zora.

She said the attacks were motivated by her political beliefs at the time, including a fierce opposition to genetic engineering and solidarity with striking female factory workers in South Korea.

Gerhäuser said she had provided alarm clocks for two detonators. But in both cases the devices failed to go off and no one was injured.

She stands accused of belonging to a terrorist organization and attempting bombing.

The Berlin court said that because Gerhäuser had turned herself in to the authorities late last year, the maximum penalty she would face would be [a] two-year suspended sentence.

Rote Zora was a women’s splinter group that claimed responsibility for 45 bombings and cases of arson between April 1977 and February 1988 with the aim of bringing about radical change in German society.

According to another report in The Guardian (Kate Connolly, ‘Militant feminist on trial after 20 years on run’, April 12, 2007):

Edith Lunnebach, Gershäuser’s lawyer, told a German newspaper that her client wanted to make clear to the court “that the political connections which existed then no longer exist”, and that she no longer supported them. Her client would not express remorse, and she had given herself up because she wanted to “bring to an end the situation of illegality which had become a burden”.

Despite Connolly’s assurances that “Rote Zora is now little more than a footnote in the history of leftwing German terrorism”, what’s really interesting is the fact that she fingers Thomas Kram, “a leading member of the Revolutionary Cells” and Gerhäuser’s partner in crime, love and flight, as being responsible not only for “kidnappings, shootings and hijackings”, but “the bomb attack on Bologna station in August 1980 in which 85 people were killed”.

Which is very fucking odd.

Bologna, August 2, 1980. It was a hot Saturday morning, the first weekend of Italy’s traditional holiday month, and thousands of vacationers jostled their way to and from the trains in Bologna’s central railroad station. In the midst of that noisy crowd someone stopped midway between the second-class waiting room and the coffee bar, put down a heavy suitcase, and quickly left the station. The suitcase contained over forty pounds of explosives, perhaps stable nitroglycerine, connected to a timer. At exactly 10:25 AM it exploded, ripping through the crowd, tearing apart the reinforced concrete walls, and bringing the roof crashing down on hundreds of bodies and parts of bodies.

In the bloody aftermath, rescue squads worked for over twelve hours to pull the dead and maimed from the rubble. As they labored, a young neofascist entered a telephone booth across town and dialed Bologna’s leading newspaper. “This is the Armed Revolutionary Nuclei,” he said. “We claim responsibility for the explosion in the railway station.” The final toll: eighty-five dead—the eldest an eighty-six-year-old man, the youngest a three-year-old child—and more than two hundred wounded…

On the other hand, so is the fact that the Irish group INLA, “one of Ireland’s most ruthless terrorist groups”, was infiltrated by a German agent from the Bundesamt für Verfassungsschutz (BfV) (Federal Office / Agency for the Protection of the Constitution) — who, incidentally, initially made contact with the group via his involvement in the Revolutionary Cells network. (Well, according to an article in The Times anyways: Iain Cobain and Allan Hall, ‘A spy in the INLA’, January 8, 200/1). Currently, the BfV is engaged in monitoring with a view to disrupting the “extreme left” networks planning A Big Party to celebrate the arrival of at least 8 war criminals in the German resort town of Heiligendamm in June. Word on the street is that the BfV is hoping to utilise an informant within the ranks of local Kiwi anarchists in order to penetrate the highest echelons of the organisers. (The INLA, it should be noted, declared a ceasefire on August 22, 1998.)

The challenge to state authorities presented by anarchist and leftist social movements in Europe is examined, briefly, by another article on Deutsche-Welle by Nick Aimes (‘Europe’s Radical Left Confronts Global Issues and Enemy Within’, April 9, 2007); the ‘radical left’, in this case, being the Marxist left, and the ‘enemy within’ anarchist and other libertarian revolutionaries. Rather humourously, Guy Taylor of the SWP front Globalise Resistance is quoted as stating that “For protests such as the EU and G8 summits, there is an umbrella organization that is established to coordinate such mobilizations… More often than not, it is Globalise Resistance that takes that role.”

“Globalise Resistance exists mainly to increase the influence of the SWP within the anti-capitalist movement. It is only interested in activities to the extent that its brand recognition increases. For instance, commenting on Gothenburg GR’s full-time organiser and SWP member Guy Taylor said “GR has gone down brilliantly, the words on the GR banner People before Profit, Our World is Not for Sale were taken up and chanted by the whole protest!” Globalise Resistance would no more take part in an action without prominently displaying its banners and placards than an oil company would give money to an environmental project without telling anyone.”

In most respects, Aimes’ article simply replicates the standard tropes — established in the 1960s, and resurrected, periodically, as the need arises — of reporting on protest movements and events. Thus we are informed that: a) ‘the left’ is in some manner resurgent, however; b) a small element causes ‘trouble’; c) happily, authorities both within these movements and within the state agree on the need to control unruly elements — but; d) somewhat troublingly, they disagree over the best methods by which to do so. An ‘objective’ assessment of the situation is therefore required, and is provided by the academy, in this case Mudde and March.

Our first expert, Mudde, notes that: a) while ‘the left’ — which is considered to be synonymous with the Marxist left — has lacked institutional support since the collapse of Communism in Eastern Europe and China, it remains ideologically purposive and; b) the far left and the far right have a common enemy in ‘globalisation’. Our second expert, March, on the other hand, quite boldly asserts that the violent elements what’s responsible for all the trouble may number no more than 200 (Europe has a population of 710,000,000), thereby constituting a vanguard of professional revolutionaries (and according to the familiar, Leninist model). Two ‘groups’ are singled out for attention in this regard: the Black Bloc and the ABC.

Recent examples, such as the riots in Copenhagen over the closing of a youth center which attracted radical left-wing extremists from around Europe, indicate that some activists are willing to travel to violently support causes in other countries. One far-left group which was involved in the Copenhagen demonstrations, the Anarchist Black Cross, organizes protests around the world…

Ah… er… um… yeah. Right. ‘Involvement’ is obviously a technical term meaning ‘subject to police repression’, while ‘protest organisation’ means ‘thorn in the side of the authorities’…

Ah fuck it. Who cares anyway.

I live in Melbourne, Australia. I like anarchy. I don't like nazis. I enjoy eating pizza and drinking beer. I barrack for the greatest football team on Earth: Collingwood Magpies. The 2023 premiership's a cakewalk for the good old Collingwood.
View all posts by @ndy →
This entry was posted in History, State / Politics, War on Terror. Bookmark the permalink.