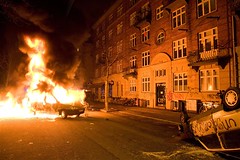 Yeah well; it appears that Danish authorities have so far failed to crush the spirit of resistance in the lovely Danish capital of Copenhagen. And what an ecumenical bunch Danish yoof are! In a screamingly obvious development that is bringing tears to the eyes of Mick Armstrong, AP reports that ‘European Anarchists Join Denmark Rioters’ (March 4, 2007):

Anarchists from across northern Europe flocked to join protesters in the Danish capital on Saturday after two nights of riots sparked by the eviction of squatters from an abandoned [‘abandoned’ = occupied for 25 years!] building that had been a center for young leftists and punk rockers.

[Incidentally, making ‘punk rockers’ in Europe a different breed to some of those in Melbourne, busy as they are kissing neo-Nazi arse.]

More than 500 people, including scores of foreigners, have been arrested since the riots started Thursday. Authorities said more than 200 were arrested early Saturday following overnight clashes in which demonstrators pelted police with cobblestones and set fire to cars…

But in news that is sure to warm the hearts of Armstrong and his middle class followers, ‘Danish police round up foreigners, violence down’ (March 3, 2007):

COPENHAGEN (Reuters) – Danish police rounded up foreigners it said had helped fuel a wave of violence that followed the eviction of activists from a Copenhagen youth center earlier this week.

The arrests followed some of the worst violence early on Saturday, when police fought street battles with hundreds of youths who torched cars and vandalized a local school…

And just as the Danish resistance — with the assistance of comrades from across the borders — is raising the stakes, so the Danish state is taking the opportunity to embark upon a more general ethnic and social cleansing: the offices of the Anarchist Black Cross, for example, have been evicted, its occupants arrested, and a number of other anarchist projects, groups and individuals in the city attacked by police terror squads:

Police said they raided houses, schools and hostels, detaining about 100 activists, half of whom [are] foreigners. Local media said more than 600 people have been held since the violence erupted on Thursday. They included Germans, Swedes, Norwegians, Italians, Irish, British and Spaniards…

Well done! Give them hell! Do not be intimidated by the fascist police!

I live in Melbourne, Australia. I like anarchy. I don't like nazis. I enjoy eating pizza and drinking beer. I barrack for the greatest football team on Earth: Collingwood Magpies. The 2020 premiership's a cakewalk for the good old Collingwood.
View all posts by @ndy →
This entry was posted in Anarchism, State / Politics. Bookmark the permalink.