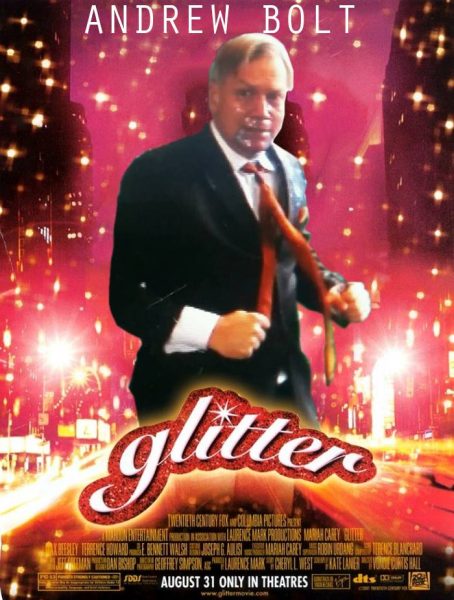 Reactionary commentator and convicted racist Andrew Bolt was a special guest at a book launch at Il Gambero restaurant in Carlton this time last week. Organised by a group called The Unhinged The Unshackled, the event was intended to promote a paean to Donald Trump penned by RMIT academic Steven Kates. Called The Art of the Impossible, ‘The entire book is comprised of blog posts on my own website: www.lawofmarkets.com some of which were also then published on my shared website: www.catal[l]axyfiles.com.’

In any case, prior to the launch two people accosted Bolt outside the restaurant, and one of them poured sparkles on his suit. This triggered Bolt, and there was a brief scuffle, captured on both CCTV and by a photojournalist. Or as Kates puts it on his blog: Violent thugs attack speaker at Art of the Impossible book launch. Thus far, Bolt himself has managed to squeeze out a mere 14 blog posts on the subject (and counting), the first titled ‘ON THE FASCISTS WHO ATTACKED ME’ (June 6): ‘Watch the fascist Left attack me and get clobbered. Luckily the cameras do not capture me kicking one between the legs.’

From here the story quickly snowballed into an heroic epic in which Bolt became an Antipodean Alt-Knight bravely battling the fascist anti-fascists with his bare fists (e.g.: Here’s A Thug’s-Eye View Of That Antifa Attack On Andrew Bolt, The Daily Caller, June 8, 2017; Watch Conservative Commentator Beat Down Leftist Thugs Attacking Him Over Trump Book, FrontPageMag, June 8, 2017; Thunder Down Under: Aussie Columnist Fights Off Antifa, National Review, June 8, 2017).

A writer unlikely to ever win a Walkley, in one post Bolt quotes ‘Melbourne Antifa’ as having assumed responsibility for the glitter-bombing on behalf of their ‘family’: 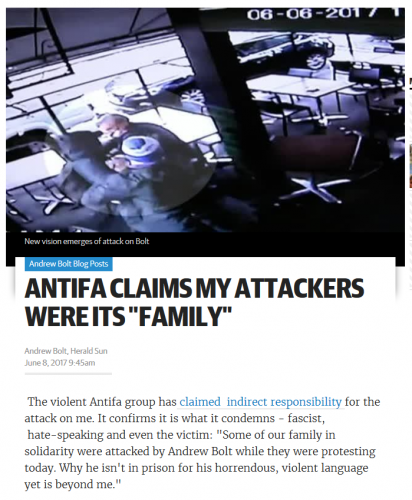 Of course, the one slight problem with this claim is that the Facebook page to which Bolt links — https://www.facebook.com/antifamelb — is a fake account, created by one or another species of nazi troll. In fact, as I’ve noted previously, ‘Melbourne Antifa’ is one of several such accounts on Facebook and Twitter (a recent addition is ‘ANTIFA Toowoomba’: legit accounts are Antifascist Action Brisbane, Antifascism Tasmania, Anti Fascist Action Sydney and Melbourne Antifascist Info). Such trollery, especially when performed for a gormless reactionary like Bolt, often works, but not always: the nazi(s) trolling Socialist Alternative in Perth being a case in point (‘Fake’ anti-Semitic Socialist Alternative posters appear in Leederville, Natalie Richards, The West Australian, June 12, 2017). Rather, generally speaking, these fake accounts only manage to fool teenyboppers, the ignorant, and the naif … and occasionally professional trolls like Bolt (when it suits them). See : Houston Chronicle, KPRC Duped by Alt-Right Trolls Over Sam Houston Protest, Craig Malisow, Houston Press, June 1, 2017; Fake Antifa Twitter Accounts Are Trolling People And Spreading Misinformation, Craig Silverman, BuzzFeed, May 31, 2017 (‘This is part of a coordinated campaign to create fake accounts in an attempt to troll and discredit anti-fascist activists’).

Nazis have been a bit more active of late. Leaving aside the nipsters of Antipodean Resistance, their various attempts to gain publicity (pro-tip: try Bolt), and the wreckage of the zombie Aryan Nations, Combat 18 has been rearing its head again in WA. But more on that later … in the meantime, this article by Spencer Sunshine about ‘The Growing Alliance Between Neo-Nazis, Right Wing Paramilitaries and Trumpist Republicans’ in the US of A (Colorlines, June 9, 2017) is essential reading:

I have been following Far Right movements for more than a decade as a researcher and journalist. Over the past few months, I’ve seen an increase in the visibility of a new, violent, right-wing street protest movement that I call “Independent Trumpism.” It unites neo-Nazis, members of the alt-right, Patriot movement paramilitaries and Trumpist Republicans.

Two things set Independent Trumpism apart from usual right-wing politics. First, the group’s rallies are in support of the president, but are organized outside of the Republican Party structure. Second, mainstream Republicans are appearing alongside open White supremacists, especially at events billed as “Free Speech” marches …

See also : Confronting the Nationalists and Their Police: A Full Report from Portland on June 4, CrimethInc, June 6, 2017; Is there a neo-Nazi storm brewing in Trump country?, Lois Beckett, The Guardian, June 4, 2017 (‘Can national socialism, repackaged as ‘white identity’ politics, earn votes in rural counties that voted for Trump?’). More generally, see : It’s Going Down and Antifa International for news, views, and links to local organising.

Oh, and finally, I suppose I should also note the recent death of Bob Whitaker, Presidential candidate for the fascist American Freedom Party and author of the slogan ‘Anti-racist is a code word for anti-white’. 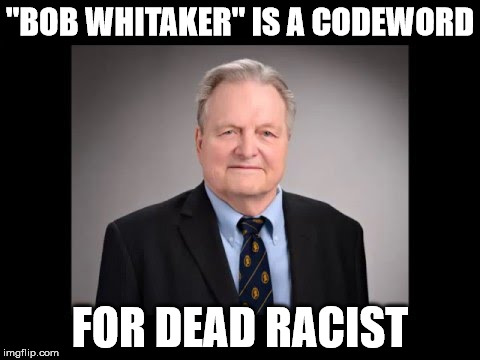 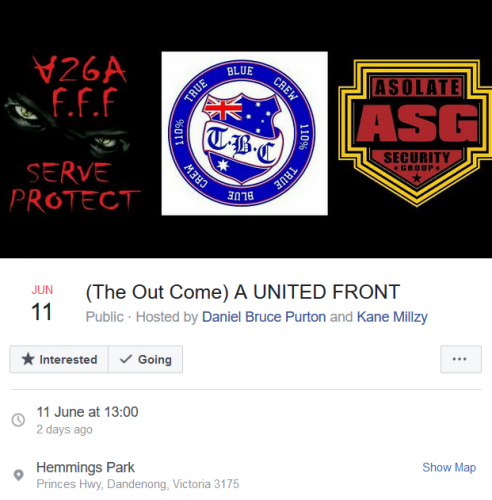 On June 11, a small group of local far-rightists gathered in Dandenong in order to discuss the establishment of a vigilante gang to protect the ‘burb from marauding African kidz. While this is not the first time that fascists and the far-right have openly discussed taking the law into their own hands — the Soldiers Of Odin were gamely compared by The Age to Guardian Angels, and the UPF once discussed covertly organising some Right Wing Death Squad Entertainment — the participation of an actual registered security organisation in the project is novel, as well as ambitious.

Spearheaded, seemingly, by a patriotik fella called Daniel Purton (who’s the leader of a nü gang called A26A), those at the meeting included ‘True Blue Crew’ lvl boss Kane Miller, some Soldiers Of Odin, and various other minor characters on the far right. Police kept an eye on things, as did members of a new security company called Asolate Security, who’ve expressed full support for the budding vigilante campaign. This seems rather odd behaviour for a licensed security company, but then we live in interesting times.