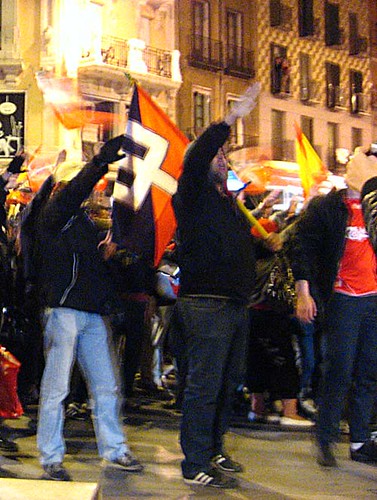 On Friday evening, February 29, in Tirso de Molina, a few hundred metres from Madrid’s main square, fascist dingbats de los grupos nazis Nación y Revolución y Combat España (Nation & Revolution and Combat Spain) safely seig heil from behind police lines, part of a small contingent of racist nutters protected from an estimated 1,000 antifa by a large contingent of police. Having been authorised by local authorities, police tried to ensure a safe presence for the rallying neo-Nazis through the use of tear gas and rubber bullets. Accounts vary, with English-language corporate/state media claiming few casualties, Reuters noting that “A spokesman for Madrid’s ambulance service said nobody had been injured though left-wing media said one protester had been blinded in one eye”. The same or similar “left-wing” sources claim at least two youths were injured and required hospital treatment.

Fascist groups in Madrid and elsewhere in Spain are mobilising in anticipation of national elections, due to be held on March 9. The election will pit Spain’s ruling party, the Spanish Socialist Workers’ Party (PSOE), led by José Luis Rodríguez Zapatero, against the (less) right-wing People’s Party (PP) of Mariano Rajoy. One of the key election issues will be immigration. Over the last decade, the immigrant population in Spain has grown significantly, and there exists obvious scope for using this fact to boost the popularity of anti-immigrant forces among the right-wing and lower middle classes. According to a recent report in The Guardian:

…10% of the 45 million inhabitants are foreign-born. Rajoy accused Zapatero of ignoring the rising phenomenon: “You are not interested in talking about immigration, but I am … 34% of prisoners in jail are foreign. We have to establish some order and control and your party does not want to.” Rajoy has made this a central plank in the PP’s campaign, targeting lower and middle class families worried about competing for increasingly scarce jobs with Spain’s immigrant population. Zapatero retorted that when he came to power in 2004 there were 700,000 illegal immigrants. “We have given them contracts, with the agreement of companies and unions, while all your party did was give them a bus pass,” he said.

The same journalist adds that “…as the economy starts to slow down, particularly in the construction industry, where so many immigrants have found work, there are concerns about social unrest. There are now more than 400,000 unemployed foreigners in Spain – a cause of concern to those who fear ghettoisation. Rajoy has chosen to make this issue a key part of his electoral campaign, arguing that new immigrants should sign a pledge to respect Spanish customs and values, and that they should be forcibly removed from the country if they fail to find work within a year.”

As if to reinforce the point the Spanish fascists, upon leaving Tirso de Molina, attempted to enter the neighbouring area of Lavapiés, an area with a relatively high concentration (approximately 1/3) of immigrant workers. Despite the best efforts of police reinforcements, the few barricades thrown up by antifascist counter-demonstrators seemed to have kept the area relatively clean. El País claims there were five injuries and seven antifa arrested, indicating that the fascists got away without injury or arrest.

Perhaps the police, in addition to acting as bodyguards, also drove the fascists home?