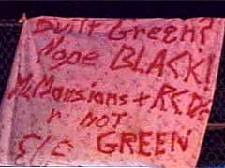 WOODINVILLE, Wash. — Explosive devices were found inside luxury houses set ablaze Monday morning outside of Seattle, and police suspected that a well-known eco-terrorism group ignited the fires. Meanwhile, a developers association offered a $100,000 reward for information leading to those who committed the apparent arson…

History repeats. In the weeks before Jeff Luers’ trial in 2001 — who, incidentally, has just won an appeal to reduce his original sentence from 22 years and eight months to 10 years — a fire broke out at the same Chevrolet dealer he was convicted of sabotaging, this time causing $1 million in damage. Now, with Briana Waters on trial, someone’s done gone and committed another arson. (See also Green Scare Update, July 14, 2007).

It’s terrorism says the government, media and developers: ‘$2 million homes burn in ‘act of terror,’ developer says’, CNN, March 3, 2008. “Fire engulfed five luxury homes Monday morning at a subdivision north of Seattle in what could be a case of ecoterrorism, officials said… Seattle’s Street of Dreams is “the most popular and highest attended single site luxury home and garden tour in the U.S.,” according to the event’s Web site.” “We are saddened by this senseless act. Such actions to destroy the property of others by this means are criminal and counterproductive” said the President.

The display homes, sold as clean and green, were built by Centex Homes, a little ol’ company from Texas:

Dallas-based Centex (NYSE: CTX), founded in 1950, is one of the nation’s leading home building companies. In addition to its home building operations, Centex’s related business lines include mortgage, title and insurance services and integrated pest defense systems. These businesses provide operational or financial support to the company’s home building operations and are leaders in their respective industries. Centex ranks No. 1 in its industry on FORTUNE magazine’s list of “America’s Most Admired Companies,” and leads the industry in customer satisfaction.

Here’s your ticket pack your bag: time for jumpin’ overboard
The transportation is here
Close enough but not too far, Maybe you know where you are
Fightin’ fire with fire