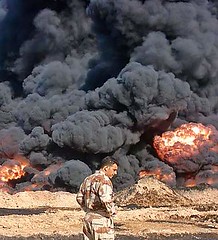 So, as I was saying: the Green Scare.

At the bottom of my blog’s frontpage (is that what you call it?) there’s a list of names, websites and calls for support, many of which relate to the ‘Green Scare’, and which appear under the general rubric of ‘War On Dissent’. In addition to ‘Free Jeff Luers’, these names and sites are Free Darren (Thurston), Support Briana (Waters) / Chelsea (Gerlach) / Daniel (McGowan) / Eric (McDavid) / Rod (Coronado) and Zach (Jensen). Over the course of the last year or so, many of these folks have been sentenced for ‘eco-terrorism’, the trials of others are ongoing, and, while some have defied the US state, others have collaborated with prosecutors and turned against their erstwhile comrades.

The term ‘Green Scare’ refers to a recent series of US Government prosecutions of environmental activists, and is intended to evoke memories of previous Government witchhunts against anarchist and left-wing political activists in the 1910s and 1950s — the ‘Red Scares’.

Most of the above-named individuals — Darren Thurston, Briana Waters, Chelsea Gerlach and Daniel McGowan — were prosecuted as a result of Operation Backfire: “the name given by the Federal Bureau of Investigation (FBI) to the ten year old investigation and indictment of fifteen individuals accused of several arsons in the Pacific Northwest between 1996 and 2001 claimed by the Earth Liberation Front (ELF) or the Animal Liberation Front (ALF)”; the FBI announcing the first indictments of 11 people for ‘domestic terrorism’ in January, 2006.

Eric McDavid and Zach Jensen, on the other hand, were two of three people (the other being Lauren Weiner) “arrested on January 13, 2006… and… accused of “conspiring to damage or destroy by explosive or fire” cell phone towers, power plants and US Forest Service facilities”. Zach and Lauren have both since agreed to testify against Eric, whose trial is ongoing. (Note that Zach’s site has since been deleted.)

Finally, Rod Coronado, like the subjects of Operation Backfire and the ‘Sacramento Three’, another victim of the Green Scare, goes to trial this September for a speech he gave in San Diego in 2003:

Agranoff says about 100 people were at the San Diego talk, and he was thrilled. “Usually, we’d get about 15 people. We’d publicized the hell out of this.” It was a public event, and he didn’t know most of the attendees. Finally, someone asked a question: How did you build the incendiary device you used in Michigan?

Coronado never missed a beat. He’d answered this before. Trying to recall his wording, he says now: “I was like, ‘Oh, well, I did this: I made a crude incendiary device’—and I walked over to a table where we had the food set up, grabbed an apple-juice jug, saying, “a device like this,” and then I turned around, there was a chalkboard behind me, and I made a really brief line drawing of how an electronic circuit works: here’s the battery, here’s the timer, here’s the igniter. And then you create a circuit, and that ignites underneath this [the jug, which would have been full of a mix of gasoline and motor oil] and—boom! Just like that.” ~ Dean Kuipers, ‘The Green Scare’, Los Angeles CityBeat, May 3, 2007 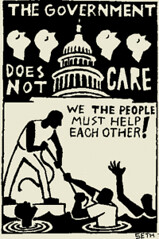 This, in extremely brief detail, is the story of the Green Scare, and that of ten or so of the approximately 28 individuals targeted by the US state for alleged crimes committed in the name of saving animals, plants and their habitats from destruction. And irrespective of the truth of the allegations, or their tactical advisability, what’s interesting about this latest wave of repression in the US is that it is being done in the name of fighting ‘terrorism’. Further, this fight not only involves the expenditure of hundreds of millions of dollars by state agencies such as the FBI, but takes advantage of the raft of highly repressive ‘anti-terrorist’ legislation enacted in the US since 9/11, both in terms of utilising highly questionable, and previously unlawful, information-gathering techniques (including the use of government agents and paid informants), but also in terms of the spectre of massively-increased punishments, especially by way of sentencing guidelines augmented by ‘terrorism enhancement’ (TE).

An example of US Government spying is the case of ‘Anna’, and the recent revelation that state authorities in Aotearoa / New Zealand are also employing spies, as well as referring to the ‘anarchist threat’ (Spies exposed in local activist groups, Anarchia, May 27, 2007), suggests that it’s highly likely that the Australian public too, will again soon be reading of spies (the anarchist threat having already been covered):

In January 2006, with the arrest of three suspected eco-saboteurs in Auburn, California (Sacramento County), the FBI revealed that it is investigating the “anarchist movement”, writ large. Special Agent Nasson Walker disclosed in an affidavit that the FBI had embedded a paid informant with the suspects, recruited when she was only 18 or 19. The FBI had dressed her up as a medic and dispatched her to participate in numerous peaceful, large-scale protests against, e.g., free trade and its concomitant race to the bottom in wages, human rights, and environmental standards. Needless to say, most if not all of the people she interacted with (politically organized with, treated medically, and lived with) were not plotting crimes of violence or sabotage. Yet the FBI can claim — with a whiff of legitimacy, even — that it has the right to engage in such intimate espionage and dragnet-style policing because ex-General John Ashcroft relaxed the Attorney General Guidelines to permit widespread snooping. Originally created to protect the public from FBI-KGB tactics after the exposure of its COINTELPRO operations in the 70s, the A.G. Guidelines now permit the FBI “to go anywhere the public can go” in Ashcroft’s words, without any foundation of suspicion that a crime is afoot. Undoubtedly, the FBI did not blow “Anna” the informant’s cover without leaving other agents in the field and in political meetings, in decision-making positions in groups, and in people’s homes.

Agent Walker’s affidavit is further revealing of the FBI’s backslide into politically motivated investigations. It references “anarchist” or “anarchism” 26 times in its mere 14 pages. In it, the FBI seems obsessed with the anarchist “lifestyle”, anarchist literature, and anarchist gatherings. These invocations of dread anarchism add nothing more to the scales of probable cause than if all the terms were replaced by the word “Christian”, and no one can gainsay that Christians have committed more atrocities in history than anarchists. It is elemental that a person is not guilty by association to an unpopular (or popular) cause in this country. But as a PR move — in seeking more constitutionally suspect laws, higher bails, more warrants, longer sentences, and a bigger chilling effect on progressive activists — the government’s projection of a giant anarchist menace is highly effective… ~ ‘War on the First Amendment: The Great Green Scare and the Fed’s “Case” Against Rod Coronado’, Ben Rosenfeld, Counterpunch, March 10, 2006

A great deal more information regarding Operation Backfire and the Green Scare in general may be found via GreenScare.org, journalist Will Potter’s GreenIsTheNewRed.com, the Civil Liberties Defence Centre in Eugene, Oregon and the FBIwitchhunt.com site. At present, the state-of-play for the 15 individuals charged as a result of Government repression as embodied in Operation Backfire may be summarised as follows:

Lacey Phillabaum and Jennifer Kolar have also been indicted and pled guilty after turning police informant in both the Oregon and Washington cases. They have not been sentenced yet and will most likely be sentenced in Washington after Brianna Waters’ trial. The first informant, Jacob Ferguson — a self-professed serial arsonist and longtime heroin addict — is as yet unindicted, and according to his own admission has been granted immunity and has been paid at least $50,000 for his cooperation from federal prosecutors despite playing an aggravating role in nearly every indicted arson.

In addition to the years long sentences with Terrorism Enhancements, there has also been one casualty of “Operation Backfire.” Bill Rodgers of Prescott, Arizona, was found dead in his cell two weeks after his arrest in an apparent suicide.

Finally, to the best of my knowledge, and in a manner similar to the non-reportage of the case of Josh Wolf, little if anything has been reported in the Australian state/corporate media regarding any of these cases.

Lesley Stahl on U.S. sanctions against Iraq: We have heard that a half million children have died. I mean, that’s more children than died in Hiroshima. And, you know, is the price worth it?
Secretary of State Madeleine Albright: I think this is a very hard choice, but the price — we think the price is worth it.

I live in Melbourne, Australia. I like anarchy. I don't like nazis. I enjoy eating pizza and drinking beer. I barrack for the greatest football team on Earth: Collingwood Magpies. The 2021 premiership's a cakewalk for the good old Collingwood.
View all posts by @ndy →
This entry was posted in Anarchism, State / Politics, War on Terror. Bookmark the permalink.