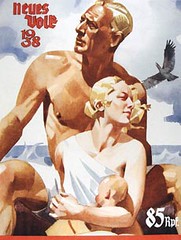 This year’s Sydney Forum — Australia’s premiere gathering of teenaged fascists, middle-aged white supremacists, elderly neo-Nazi pensioners, anti-Semitic lunatics, conspiracists, cranks and “I’m as mad as hell, and I’m not going to take this anymore!” racists of all ages — is shaping up to be a corker, a ding-dong battle between the various mobs that comprise the far right milieu, all of whose beady eyes will be fixed on the one, glittering prize: control of the Australia First Party!

Well, that and the thermos.

Founded in 1996, the Australia First Party functions as a political refuge for those on the racist fringe who want to go ‘straight’; that is, to contest, and perhaps even win, an election to public office. Thus far, however, the results have not been terribly encouraging: only one member of the party, Bruce Preece, has won an election — and then only to a local council, in Adelaide, and all the while maintaining silence over his membership of and support for a racist party.

A further complicating factor for the party has been the sudden emergence of Pauline Hanson, the rise of her party One Nation, and the equally rapid decline of both. The effective demise of One Nation, then, has opened up some small space in the political market for Australia First. Moreover, the explosion of racist sentiment in Cronulla in December 2005 was widely expected to trigger at least some resurgence in the party’s ranks, however modest that surge might be. The fact that no such resurgence has taken place has put a great deal of pressure on the leadership of the party, and tensions within it, and among the far right generally, have been building since then. This year’s seventh annual Sydney Forum — planned for the last weekend in August — is therefore widely tipped to experience a blowout.

Control of the Australia First Party is concentrated in the hands of the National Council, and the incumbents are centred around the Old Man of fascist politics in Australia, Dr. James Saleam. Saleam has had a political stranglehold on the party for some years now, one which commenced after Graeme Campbell ditched it upon its creation in 1996. Since then, while Diane Teasdale, the racist country bumpkin from Shepparton, Victoria, has been President — and hence the formal leader of the party — Saleam has functioned as the de facto Fuehrer from his bunker in Tempe, Sydney (the same location from which, prior to his imprisonment in 1991, Saleam controlled the precursor to Australia First, National Action).

Saleam’s closest ally, at this stage, appears to be his old mate Ross ‘The Skull’ May, another jailbird — one without a doctorate — but, unlike Herr Doktor, one still happy to prance about Sydney town dressed in swastikas. Indeed, it’s partly as a result of May’s continuing close association with Saleam that many Australia First members — who aren’t exactly the sharpest tools in the shed — have begun to question the wisdom of having Saleam continue to function as de facto leader and spokesperson. Adding weight to the bid to unseat Saleam is the ongoing saga surrounding his ethnicity (one occasioning his banishment from Stormfront for being not-quite-white), and, most recently, President Teasdale’s decision to re-assert her control over the party’s Internet presence.

‘A woman scorned’ and all that.

Yes I rips up the West, I’m the best, I’m no jokin’
I run up shit creek and freak the backstroke
So Baron freak it, provide the funk alligator
Yo I’m out but “I’ll be back” like Schwarzenegger

The other drunken fool directly competing with Saleam for possession of the bag of shit that is Australia First is David Innes, known on Stormfront as ‘Baron Von Hund’. He’s from the West Coast and, given the recent incarceration of leading figures from the Australian Nationalists Movement — and the retirement from political activism of other, lesser figures such as Ben Weerheym — Innes, together with his partner (and Stormfront moderator) Lilith Peterson and brother Paul (‘Steelcap Boot’), as well as a small circle of others, have become the public face of White supremacy in West Australia. The group gathered around the Innes brothers base their ideology on the teachings of David Duke, and are the chief proselytizers of Don Black‘s model of racist organising, a model of organising which seeks to ‘mainstream’ white supremacy and shed the neo-Nazi imagery long associated with it. In this endeavour, Innes has also formed an alliance with members of the party in Newcastle.

Not everyone is happy with this development, of course. For example, according to Jim Perren, Innes is responsible for alienating a large number of boneheads from online forums such as Stormfront, and — especially given the short-lived White Pride Coalition of Australia‘s supposed coinage of the term — to have done so in the name of ‘White nationalism’ is an even worse crime. Perren also alleges that Innes has acted as an informant, providing information on the membership and activities of far right groups and individuals to the anti-racist network FightDemBack! In fact, Perren draws an explicit comparison between Innes and FightDemBack!, arguing that they should be regarded as roughly equivalent threats to the cause of ‘White nationalism’.

It is unclear, at this stage, to what extent Perren’s problems with Innes are shared by his kameraden, especially those clustered around groups such as Australian New Nation (a kind of successor to the WPCA). So too, the success of Innes’ attempts to establish a willing coterie of followers in Australia; his attempts to milk some of them of their money — ostensibly so that he and the missus might travel from Perth to Sydney for the Forum — met with some degree of success, but merely sparked derision in others. The monthly BBQs he holds at his house in the Perth foothills gather together a small number of the willing, but even these events, it should be noted, were — according to Perren anyway — originally the result of the efforts of members of the WPCA, a coalition Innes derided.

We Are… the League

Oddball Queensland racist, Wagnerite and tennis player John Drew is all that remains of the ‘Patriotic Youth League’, an abortive attempt by Australia First to establish a youth wing. Drew has declared his hostility towards the Victorian grandmother, as well as his desire to help unseat her from her Presidency, but whether this means he’ll throw his meagre weight behind Saleam or Innes is unknown at this stage. Success at establishing a branch of the party in Brisbane before the gathering in August would add to his puny muscle, but being widely regarded as something of a crackpot — even among racists — does little to instill confidence.

Note that one of the casualties of Innes’ purges of the more openly neo-Nazi elements has been the Brisbane bonehead contingent, who have withdrawn en masse (well, all three(?) of them) from Stormfront. Whether this is truly a loss for von Hund’s tendency is uncertain, however, as what the small group contributed in terms of militancy was perhaps cancelled out by its general incompetence, quasi-criminal status, and — not coincidentally — very limited appeal to the masses.

Cronulla videographer Martin Fletcher, one of the younger, Sydney-based members of the party, has also denounced Saleam’s involvement in Australia First, and shares the seemingly widespread opinion that it would be far preferable for the party to continue to wander in the political wilderness unburdened by his peculiar form of guidance. Also wandering in the wilderness is Darrin Hodges, or the ‘Anglo-Australian National Community Council’ as he prefers to be known. In news that has rocked fascist trainspotters, Hodges has recently been expelled from the party — according to him, because some posts on his blog ‘may bring the party into disrepute’. Which just goes to show that even fascists have a sense of humour.

One of the wildcards at The Forum will be MC Welf Herfurth. Herfurth has enjoyed strictly disciplining these sometimes slightly haphazard annual gatherings of Australian fascists for six years now, and during this period has developed a close relationship with Herr Doktor, the principal organiser. On the other hand, Herfurth is also a close acquaintance of Innes, and together the two are struggling, in a manner befitting Aryan Übermensch, to establish a New Reich in Australia and New Zealand (Aotearoa). And which way the Holocaust-denying German jumps may have a crucial impact on the final outcome.

See also : A Neo-Nazi Field Trip to the Met, “White supremacists from across the country gather in New Jersey and New York for barbecue and culture”, Maria Luisa Tucker, Village Voice, June 12, 2007

Hitler visits a lunatic asylum. The patients give the Hitler salute. As he passes down the line he comes across a man who isn’t saluting.
“Why aren’t you saluting like the others?” Hitler barks.
“Mein Führer, I’m the nurse,” comes the answer. “I’m not crazy!”

I live in Melbourne, Australia. I like anarchy. I don't like nazis. I enjoy eating pizza and drinking beer. I barrack for the greatest football team on Earth: Collingwood Magpies. The 2023 premiership's a cakewalk for the good old Collingwood.
View all posts by @ndy →
This entry was posted in !nataS, Anti-fascism, State / Politics. Bookmark the permalink.