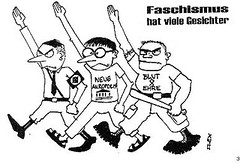 Beautiful one month, perfect the next.

While Zionist students worry about the supposedly anti-Semitic antics of Socialist Alternative, Brisbane-based members of Scumfront Down Under have been running into all sorts of trouble simply trying to hold a BBQ.

Last month, the racist wankers managed to arrange for themselves to be denied entry to the Medieval Fayre; this month, their picnicking was interrupted by the presence of — eeek! — Muslims!

Well, that’s what the boneheads on Shitfront reckon.

According to the pseudonymous organiser 3sevens, while up to 20 neo-Nazis gathered in order to eat chops and sausages (and, presumably, to blame ZOG for their poor quality — they’ve only themselves to blame for the poor quality of the conversation!), at some point the scum “were confronted by a large group of muds”, leaving these brave souls “no choice but to pack up [their] gear and leave”.

On the highly amusing Scumfront thread in question, not being content with the description given by 3sevens, Aquila Audax asks “What breed of mud were they?”. “Muslims”, replies Anthonytwunt: a supposition which seems to have struck real fear into the hearts of the racists; this despite the fact that the two groups were apparently of equal number, and despite the fact that the ‘muds’ apparently simply expressed a desire to talk with the assembled racists and fascists (although Godwin knows why they’d bother).

As for their decision to flee, presumably the assembled neo-Nazis were afraid of the consequences of engaging in a full and frank discussion with their fellow citizens: who knows?

In any case, 3sevens justifies the group’s decision to flee on the basis that “we had a female with us” and because he was fearful of other ‘muds’ joining the ‘muds’ already assembled, leaving the scum outnumbered as well as outgunned.

Obviously a thinker, Anthonytwunt reminds readers that this was ‘real life’, not a film, and that when confronted by opposing forces, a victory is far from assured. Further, in the absence of some kind of ‘voodoo’, less than likely in his opinion.

barbarossa2010, however, opines that running away was the wrong thing to do, and has the effect of leaving the casual observer with the impression that Shitfront members are not only racist, but cowardly to boot.

It’s at this point that Perth-based Scumfront moderator Lilith Peterson intervenes, declaring that, while she doesn’t know what happened, the boys (and one girl) should be congratulated — although whether for simply assembling, fleeing, or assembling and then fleeing is somewhat unclear.

Whatever: the event was clearly a triumph for the White Race.

Clearly a fan, Luke Connors (young_soldier) agrees: “Very smart words from the clever cat lady” he claims, recalling the years he spent being beaten up in the boxing ring (before deciding that he’d lead a healthier lifestyle outside of it). BluedEyedBlonde also agrees with Lilith, declaring that running away was “exactly the right thing” to do, and clear evidence of the existence of both “intelligence and courage” among the assembled racists.

Obviously incensed at the accusation of cowardice, Hammerskin38 sets the record straight: during the course of the BBQ, the assembled racists spied some people they believed were Muslims and abused them, whereupon the abused Muslims left. Later, they returned.

One, whom the bonehead in question took to be a leader, asked for an explanation for the abuse, which the bonehead refused, preferring the use of violence to reason.

For reasons which are obvious.

The point being: “THE ARABS WERE GUTLESS SCUM”, and — far from being cowards — the fascists who briefly stood their ground before deciding to leave were fearful of being attacked. (To do otherwise, apparently, would have meant that the assembled fascists ended up dead, in hospital, or in prison.)

Another bonehead, bootboys_brisbane, agrees with Hammerskin38. Interestingly, he adds that he intends journeying to Melbourne, presumably for the Ian Stuart is Dead celebration on September 23rd.

Why on Earth the boneheads in question think that the reception in Melbourne will be any warmer is beyond me.