Sensitive New Age Hitlerites will be gathering in Sydney again this August, for the seventh annual Sydney Forum… and you’re invited! 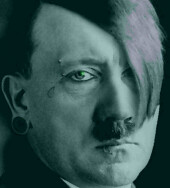 As in previous years, the Forum will function as a de facto Australia First Party conference, with AFP führer and convicted neo-Nazi criminal Dr. James Saleam organising things behind-the-scenes, and German-born unconvicted neo-Nazi (and Holocaust denialist) Welf Herfurth acting as MC. The Forum / conference gathers together, in the one place and at the one time, the er, ‘cream’, of the Australian fascist milieu, and addressing the one hundred or so attendees will be the following, largely middle-aged — and largely batshit — bigots:

Perry Jewell : A far-right activist, founder of the now-defunct Queensland-based precursor to One Notion, the Confederate Action Party, and two-times Queensland Senate candidate (in 1993 and 1996), Jewell’s main claim to fame is having kidnapped his daughter a number of years ago in a bid to stop her using heroin (apparently);

Jim Cassidy : NSW State President of One Notion, and speaker at last year’s Forum, last February Jim told Herr Doktor that he wasn’t welcome at ONP meetings… ‘cos he was a white supremacist. I guess Jim must now believe that Saleam’s alright ‘cos he’s belatedly discovered that he’s not all-white;

Andrew Fraser : Since coming out of the closet, The Nutty Professor — and lover of all things blonde-haired and blue-eyed — has joined the long list of distinguished intellectual mediocrities to have spoken at the Forum, this being the third occasion the Canadian-born schmuck will have complained about there being ‘too many darkies’ in Australia;

and last but by certainly no means least, Herr Doktor himself. Saleam’s also promised to arrange two vewy special surprise speakers from Europe this year too… one of whom, presumably, will be from either the German NPD or the British BNP.

The first day’s events, on Saturday August 25, will be held @ an as-yet undisclosed location, the reason for the non-disclosure being to ensure that a nervous host doesn’t withdraw permission for the fascist gathering to take place on its premises (as the Russian Club did in 2005).

Judging by previous year’s events, in a kinda local, fascist, political equivalent of the Eurovision Song Contest, the venue will most likely be one of Sydney’s Eastern European Clubs; while the Russian Club sensibly cancelled the booking in 2005, last year it was the privilege of Sydney’s Estonian community to provide a platform for racist bigotry and anti-immigrant rhetoric. And this year — who knows? — maybe Sydney’s Lithuanian community will seize the opportunity to drag its name through the mud. In any case, the second day’s events will be held, as is seemingly customary, @ Jim’s bunker in Tempe (725 Princes Highway). Note that the bunker was formerly the Sydney headquarters of the now-defunct neo-Nazi grouping National Action, of which Saleam was also, prior to his imprisonment, Der führer. It’s witnessed some wild scenes in the past, including the shooting to death in April 1991 of NA member Wayne “Bovver” Smith by fellow NA member Perry Whitehouse, a murder caught on tape by ASIO:

Smith : What’s it say?
Whitehouse : Ask him, mate. Just ask him. He’s…
Smith : You’re the one that’s fuckin’ sayin’ this.
Whitehouse : Just wait here. (Footsteps.) I’ll show what I got to say.
Smith : All right.
Music. Pause in conversation. Six sharp noises in succession. Distinct sound similar to a gun being fired. Crashing sounds. Music.
Whitehouse : That’s what I got to fuckin’ say, you fuckin’ cunt.
Another member, Gregory Jorgensen, then speaks. His words are inaudible.
Whitehouse : I just killed the prick. You wanna know. Yeah, you wanna fuckin’ know. What’ya wanna know… to kill you too… I just shot the fuckin’ prick. Right. I just shot the cunt. Wanna know.
Music stops.
Whitehouse : Because he’s a fuckin’ arsehole, that’s why I shot him. Right. Do you think I’m fuckin’ scared of fuckin’ goin’ to jail. I don’t give a fuck. I’m not scared. Right. I shot the cunt dead. That’s what it’s all about boy, that’s what it’s all about, right. You ain’t got the guts to fuckin’ face up to that, you’re fuckin’ weak as piss. Right, he’s fuckin’ dead. Now we gotta get rid of that body or I’m gonna get rid of the fuckin’ body, right.
A gasp is heard.
Whitehouse : Shut up, ya fuckin’ prick.

Ah, such history! And worth recalling too, especially given the recent spat between David Innes (Baron von Hund) and Saleam (radnat) on Shitfront regarding Saleam’s status as a (non-)white, convicted criminal, and leader of a white supremacist organisation.

Which is a problem, apparently.

Whatever Saleam’s claims to the contrary, Innes’ partner and Scumfront moderator Lilith Peterson has relegated poor old Jim to the ‘Opposing Views’ segment on the site; the segment reserved for non-whites.

The documents regarding the character of Saleam’s grandfather and great-uncle — produced during their attempts to become naturalised Australian citizens, and reproduced on Shitfront — make for some pretty bizarre reading. According to one Australian bureaucrat, writing in 1921, Davis Saleam “is, plainly, morally oblique, and would seem to be hardly able to distinguish right from wrong. The candour of his confession is, to a certain extent, proof of the unsophisticated nature of the man.”