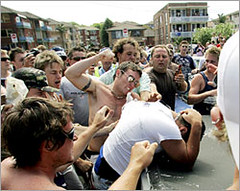 :: Above : “Australian youth took the matter into their own hands” according to the Australia First Party ::

It has come to my attention that on Saturday the 26th of August, the Estonian House Co-operative Society — for which you are the Secretary — authorised the use of its premises for the ‘2006 Sydney Forum’. The ‘Sydney Forum’ is an annual gathering of racists, fascists and neo-Nazis from all over Australia, and is organised by the Australia First Party (AFP), a racist party whose leader, Dr. James Saleam, has been convicted for crimes of racial hatred, and which has as its central policy opposition to multiculturalism and a return to a White Australia. Aside from its endorsement of racism and fascism, the AFP is perhaps best known for distributing racist propaganda during the riots in Cronulla in December last year — although it has also been the subject of more recent media attention as a result of endorsing the contents of racist pamphlets distributed in Port Maquarie earlier this month.

Given the decision by the Russian Club to withdraw their support as [host] for last year’s Forum, could you please explain why the Estonian House Co-operative Society has decided to align Sydney’s Estonian community with the propagation of racism and fascism?

White supremacy in our backyard
By DAN BOX
The Australian
Monday, 6 March 2006

Reference to Saleam’s criminal conviction may be found in this short speech by Anthony Albanese.

Given Boris’ silence, one may well expect next year’s Sydney Forum to be held at the same venue; a form of collaboration presumably aided by the ‘anti-Communist’ veneer surrounding fascist parties such as Australia First, and Estonia’s many decades of subjection to rule by Communist Russia.

No one was scheduled to replace David Bradbury, but it was announced at the time that A SURPRISE SYRIAN SPEAKER WILL ADDRESS THE FORUM in place of the Syrian Ambassador. And guess what? Having returned from his too-long holiday in the Carribean, Agent Gerbil can now reveal that the — SURPRISE! — replacement speaker turned out to be another fascist, a Syrian one: Dr. E. Melhem of the Syrian Social Nationalist Party (SSNP).

The SSNP is a weird mob: initially modelled, when first established in Beirut in 1932, on classical European fascism, it has since undergone a number of political shifts. In terms of support, the SSNP apparently has had some — both within Syria itself, and among elements of the Lebanese and Syrian diasporas — and has recently found increased tolerance, even Syrian government approval. Lack of support for the SSNP outside of Syria may have something to do with the (un-)popularity of the party’s vision of the imperialist project of constructing a ‘Greater Syria’, one comprising Syria, Lebanon, Palestine (/Israel), Iraq, Jordan… and who knows, perhaps even parts of Tempe.

(Interestingly, a representative of the SSNP also addressed the Sydney Forum in 2003. See also the reactionary historian — and one of George II’s favourite academic poodles — Daniel Pipes on Greater Syria: The History of an Ambition. Another ‘mystery’ speaker was Rex Gilroy, described in publicity material as being “a historian and archaeologist”, he spoke on ‘The Ancient European Contact With Australia And The Pacific’. Apparently Gilroy “has investigated the contacts between… peoples of Eu[ro]pean racial origin from the Near East and Old-Europe… with Australia”.)

So where to from here for the AFP?

As Ben Weerheym has revealed, the (de-registered) AFP is currently preparing — with the endorsement of the remnants of One Nation in NSW — to contest local council elections in the Sutherland Shire. Currently, however, “A member of Australia First, running as an independent, is on the ballot in the St. Johns Wood Ward of the Prospect City Council in Greater Adelaide. The result will be in by late October (the vote is a postal ballot). The ward is a small one and there are only two other candidates”; thereby, presumably, drastically improving the chances of a fascist obtaining a seat on council (only three candidates are in the running for just two seats).

Intriguigingly, the candidate in question, Bruce Preece — in addition to the usual bland assurances regarding financial accountability — states in his election profile that “I want to see the legacy that we have inherited from the past generations maintained and improved for the benefit and enjoyment of future generations”. Currently, as the AFP has noted with some disgust, Prospect City is a ‘refugee welcome zone’, a welcome which is strictly verboten according to the Whites Only AFP. Still, if Preece’s previous effort in Morialta in 2002 is anything to go by — with just 219 votes (1.3%), he came last of seven candidates — chances are AFP will be forced to look to establishing a beachhead in Cronulla instead.

And won’t that campaign be fun?

…Oh, and it appears that the AFP have hit the news again, this time for glorifying racist violence:

Both items mention the AFP’s upcoming campaign for a seat in the Sutherland Shire; neither mentions Bruce Preece’s current campaign in Adelaide…