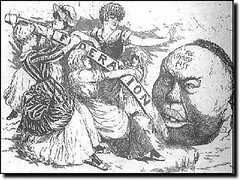 That makes Bradbury the second speaker (or possibly third, if one includes that “bloody funny sheila” — and vulgar racist — Sandy Thorne) to withdraw from the event, and means that the Forum will be addressed by almost nobody outside of Saleam’s small — and rapidly dwindling — circle of racist friends.

Perhaps Welf Herfurth, the MC, can lift the mood by making a few cracks about the Holohoax?

David Bradbury is internationally and nationally known as a film producer. His latest film, Blowin’ In The Wind, documents the appalling truth about depleted uranium shells used by the U.S. war machine in [t]he Middle East since 1991. He will speak and illustrate his talk from the film. This will be an important address for those keen to understand the immoral predatory conduct of the masters of war.

Intriguigingly, given the fact that at least one ex-member of the ANM, Ben Weerheym, will be in attendance at the Forum, Saleam failed to note some of Bradbury’s other film projects, notably Nazi Supergrass (1993):

This chilling story of terrorism in suburbia explores the dark underworld of neo-Nazis in Australia today.

There are exclusive, riveting interviews with Jack van Tongeren, jailed leader of the neo-Nazi Australian Nationalist[s] Movement [ANM], and the man who betrayed him, police informer Russell Dean Willey.

Supergrass Willey emerged from deep cover and a new legal identity overseas to tell his extraordinary story on camera for the first time. Returning to Australia in disguise, he met the film crew at a secret rendezvous and spoke frankly about his years of crime, firebombing Asian restaurants and looting warehouses to finance a campaign of racial terror in Perth – once famous mainly for flashy millionaires and beautiful beaches.

In this rare insight into the making of a racist, Willey explains his fascination with the Nazi philosophy he learned from Van Tongeren. He tells how Nazism gave him the excuse he needed to vent his anger against the Asian migrants he resented so bitterly in his home town.

As the film shows the Australian Nationalist[s] Movement was brought down by chance and clever police tactics that persuaded Russell Willey to “roll over” and turn police informer.

In fact, as of this date — just four days before the racist losers gather in Sydney — aside from Andrew Fraser, Greg Clancy, James Saleam (AFP) and Neil Baird (AFP), there are only two other speakers listed. One, a “Syria patriot”; the other:

A Historian And Author [who will speak on] ‘The Ancient European Contact With Australia And The Pacific’:

Our speaker is a historian and archaeologist who has investigated the contacts between the peoples of Euopean racial origin from the Near East and Old-Europe – with Australia. There are startling discoveries popularised now by a variety of authors. This speaker will present evidence that shows a plethora of contact over the millenia. There will be maps, slides and other specialised material. He has asked for anonymity pending the Forum.

As well he might: the Australia First Party is not a group any serious academic or scholar would normally be willing to voluntarily associate with. And — given the Party’s deeply racist and authoritarian politics — quite rightly so. (Which fact also explains Andrew Fraser’s presence.) Then again, it’s not like our anonymous ‘historian’ and ‘author’ will remain so for long.

In related news, Nic Miller of redwatchnz may be facing charges, of an as-yet unspecified nature, as a result of some of his online writings. The latest issue of the AJN reports:

Police in New Zealand are likely to charge a self-confessed anti-Semite who posted four Jewish addresses on a website filled with anti-Jewish invective.

Nic Miller, 22, of Wellington, was reported in the Kiwi press this week as saying, “I do not like the Jews, not one bit. They should have been exterminated … Jews being in New Zealand is harrassment to me. They do not belong here.”

Professor Peter Muntz, 85, a German-born Holocaust survivor was one of the Jews whose addresses were posted on the site. “I find it deeply disturbing a fellow like this should be allowed to walk free in New Zealand,” he said.

I can only agree with Rosemary McLeod’s assessment: ‘A loser, just like the Nazis’ (Dominion Post, August 17, 2006). 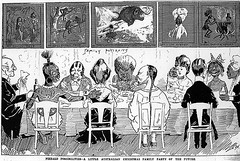 I live in Melbourne, Australia. I like anarchy. I don't like nazis. I enjoy eating pizza and drinking beer. I barrack for the greatest football team on Earth: Collingwood Magpies. The 2021 premiership's a cakewalk for the good old Collingwood.
View all posts by @ndy →
This entry was posted in Anti-fascism, Film. Bookmark the permalink.