Update #3 : Over a year later, Kyle “has been sentenced to 60 days in jail after pleading guilty Thursday to three criminal charges. McKee, 25, pleaded guilty to uttering threats and possession of a weapon dangerous to the public in connection with an incident on Feb. 13, and for assaulting a woman at a prior party.” (White supremacist gets 60 days in jail for threats, Calgary Herald March 19, 2011). The threats were made to anti-racist activist Jason Devine, who in November last year had his house broken into by five masked men who proceeded to assault him. (The five remain at large.)

Update #2: A teenager has been arrested in Calgary. Also: The Mainstream Media is Starting to Get It, But…, Anti-Racist Canada, November 24, 2009: ‘Neo-Nazis not so harmless: Calgary blast ignites concerns’, Michael Platt, The Calgary Sun, November 24, 2009: “Scorched bricks and a parking lot full of pennies and bent nails. If anything should serve as a wake-up call to the cancer in Calgary’s midst, it’s this: The remnants of two homemade pipe bombs that exploded harmlessly in a northeast parking lot…”

Update #1: We’ve Learned Who Was Targetted By the Aryan Guard, Anti-Racist Canada, November 23, 2009: “Today, we learned who the male and female targets were. And while we will not share the name of the woman, we have no problem sharing the name of the male”: Tyler Sturrup, “a member of the Aryan Guard splinter group, W.E.B. Apparently the split occurred because some Aryan Guard members felt that not enough “proactive” (read: violent) actions were being taken. In most of the pictures of the last “White Pride” march from spring 2009 where racists were seen attacking people, the individuals committing the violent acts are members of W.E.B.” 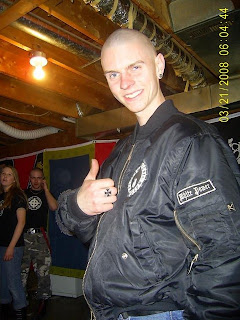 Kyle Robert McKee — the much-loved founder of Canada’s bizarro white supremacist political cult the Aryan Guard — is wanted by authorities in connection to his alleged involvement in a little bombing incident in Calgary on Saturday (November 21). “Investigators believe this was a targeted attack after questioning the occupants of the apartment suite where the device was first found” (Police seek pair after IEDs discovered at Rundle apartments, Metro Calgary, November 23, 2009).

Prior to McKee’s most recent alleged foray into the world of improvised explosive devices, the Aryan Guard was probably most well-known for prancing about on ‘White Pride World Wide’ Day. That is, March 21: a day otherwise known as ‘International Day for the Elimination of Racial Discrimination’.

Who’s McKee anyway? According to some mob in Canada:

The founder of the Aryan Guard, Kyle McKee… originally came to Calgary from Kitchener, Ontario where he had numerous run-ins with anti-racists and police. He lived with neo-Nazi Nathan Touchette and made the news when they flew a Nazi flag from their apartment, much to the outrage of everyone in the neighbourhood. McKee and Touchette made it known that they planned on moving to Calgary. Calgary’s mayor made it known they weren’t welcome. They moved anyways (after trashing the place they had been living in to the point where the house was condemned) though both eventually returned to Ontario (but not before McKee spent some time in jail for assault and possession of a weapon while wearing a mask). McKee eventually moved back to Calgary where he organized a group of dropouts and thugs into a group called the Aryan Guard.

McKee and Touchette have also been members of the neo-Nazi muzak network ‘Blood & Honour’.

The (attempted) bombing comes days after anti-Semitic schmucks in Calgary decided to graf a synagogue, a Holocaust memorial and a Jewish community centre (bringing to mind the batshit antics of the ‘White Devils’ in Perth a few years ago). Writes ‘Anti-Racist Canada’: “Some of the graffiti, in addition to the swastikas, included statements such as, “6 million more” in reference to the Holocaust and “Kill Jews.” Kill Jews? Now where have we seen that before? Oh yes! On Kyle McKee’s shins…”

On the Aryan Guard:

I live in Melbourne, Australia. I like anarchy. I don't like nazis. I enjoy eating pizza and drinking beer. I barrack for the greatest football team on Earth: Collingwood Magpies. The 2021 premiership's a cakewalk for the good old Collingwood.
View all posts by @ndy →
This entry was posted in Anti-fascism, Broken Windows, War on Terror and tagged Aryan Guard, Kyle McKee, Tyler Sturrup. Bookmark the permalink.

11 Responses to Kyle McKee : An Angry Aryan with BONUS! Bombs