In the early hours of Monday November 8, Jason Devine (30) and a guest at his home in Calgary (Canada) were attacked by a group of five masked men. The attack appears to have been in retaliation for Jason’s participation in ‘Anti-Racist Action Calgary’, and is the latest in a series of such incidents. Jason received cuts and bruises and his friend a broken arm. Both were hospitalised. Jason’s wife Bonnie and their four young children, asleep at the time, were unharmed. See:

It’s been speculated that the men belong to one of several neo-Nazi groups based in Calgary, including the Aryan Guard, Blood & Honour and White European Brotherhood, but so far none have been arrested for the attack or otherwise positively identified. (A good source of infos on the Canadian racist right is Anti-Racist Canada: The ARC Collective blog.)

Of the attack Jason wrote:

At 1:30 AM 5 males carried out an armed home invasion on the house of Anti-Racist Activists Bonnie and Jason Devine. Bonnie Devine recently ran for Mayor of Calgary in the 2010 municipal election. This is the most recent in a long line of attacks on the Devine’s. Every time their 4 children were asleep in the home.

The armed assailants overwhelmed Jason and a friend who was visiting. They repeatedly beat Jason and his friend with blunt objects. His friend was bludgeoned throughout the head area and sustained a broken arm. Jason was surrounded as each assailant took turns beating his head, back, body, arms and legs, sustaining stitches and a concussion. Both were rushed to the hospital to receive treatment. 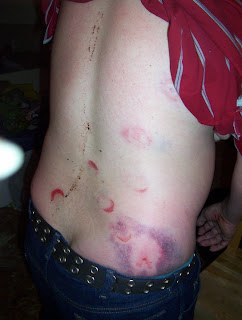 It is believed the attack is related to the recent leafleting and postering, by Anti-Racist Action Calgary, of a neighborhood where neo-nazi’s are known to live. THIS WAS NOT A ROBBERY and reports to the contrary are incorrect. Again nothing was stolen. Later it was discovered their family vehicle was also damaged while the assailants fled the scene…

As a result of the attack, Canadian Social Services have threatened to remove Jason and Bonnie’s children from their care. According to Jason: “They stated that because of our high level [of activity] we have placed our children in [unnecessary] risk and that we should stop before they either see it or are a victim of it”.

The further victimisation of the family by the state may seem unfair, but it’s not an atypical reaction to these kinds of events, sadly. You can read more about the issue at Dawg’s Blog: Calgary Social Services: “Anti-racist? We’ll take your kids!” (November 8, 2010) and Painted: Bullied to be silent (November 8, 2010). Also issuing a statement on the attack is ‘Rebel Youth’ blog, a publication of the Young Communist League of Canada (the Devines are members of the Communist Party of Canada).

I live in Melbourne, Australia. I like anarchy. I don't like nazis. I enjoy eating pizza and drinking beer. I barrack for the greatest football team on Earth: Collingwood Magpies. The 2021 premiership's a cakewalk for the good old Collingwood.
View all posts by @ndy →
This entry was posted in Anti-fascism, Broken Windows, State / Politics, War on Terror and tagged Jason Devine. Bookmark the permalink.