Here’s a few more notes on some recent fascist shenanigans–brought to you by the letters W and P.

First, the good news. Well, for fans of MMA boneheads at least, as @ ‘KSW XV – Revenge’ in Warsaw on the weekend the two most famous (Finnish) (semi-)pro neo-Nazis beat their Polish opposition. Sherdog’s Tomasz Marciniak writes:

The vacant KSW lightweight title was claimed by Finland’s Niko Puhakka, who put Maciej Gorski to sleep with an arm-triangle choke at 3:20 of the second round.

Gorski looked spry in the standup, but was unable to put a stop to Puhakka’s takedowns. After a particularly flashy slam in the second stanza, Puhakka moved to side control and secured the winning hold. Gorski went out and referee Tomasz Bronder stopped the fight, though the Pole was unable to come to terms with the official’s decision for a few minutes after the fight.

Puhakka’s Espoon Kehahait teammate, Toni Valtonen, proved to be too much for Poland’s Lukasz Jurkowski to handle. The heavier and stronger Finn completed most of his takedowns and spent approximately eight minutes of the 10-minute bout on top of Jurkowski throwing strikes.

After the fight, Jurkowski took the microphone and announced to the crowd that, having lost his 10th fight, he was retiring from MMA. The 30-year-old thanked the hometown fans for their support and received a rousing ovation.

Puhakka once served as as a thug for the Finnish Blood & Honour franchise; Valtonen has put his neo-Nazi tattoos down to a reckless youth, but failed to have them removed as an adult. 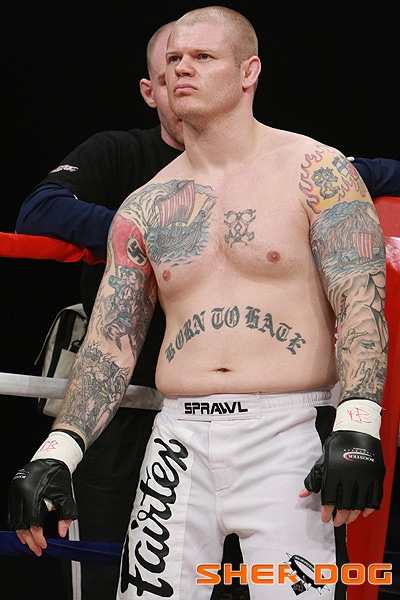 Leading Canadian bonehead Kyle McKee is in jail. Kyle “has been sentenced to 60 days in jail after pleading guilty Thursday to three criminal charges. McKee, 25, pleaded guilty to uttering threats and possession of a weapon dangerous to the public in connection with an incident on Feb. 13, and for assaulting a woman at a prior party” (White supremacist gets 60 days in jail for threats, Calgary Herald, March 19, 2011). The threats were made to anti-racist activist Jason Devine, who in November last year had his house broken into by five masked men who proceeded to assault Jason and another man. (The five remain at large.)

Because he’s in jail, the micro-fuehrer was sadly unable to lead the 12 or 15 neo-Nazis who gathered in Calgary on the weekend to celebrate WPWW Day by staging an abortive march. 100 police kept the neo-Nazis from jackbooting very much further than their assembly point and separate from the crowd of approximately 200 or so anti-racists who had gathered in opposition to the march. See : ‘Annual neo-Nazi march in Calgary fizzles’, Canadian Press and Globe Staff, Globe and Mail, March 19, 2011.

Elsewhere, Josh Wingrove has written an article on White nationalists/neo-Nazis in Calgary. It has its flaws (oi! is a musical genre, not another name for boneheads; Volksfront is a US-based ne0-Nazi network with franchises in several countries) but provides some insight into the kinds of losers attracted to the ideology and the yoof gangs which form around it. In the consolidation of a neo-Nazi milieu in Calgary, “Kyle McKee’s leadership has been key,” explained Paul Fromm, a stalwart and mentor of the extreme Canadian right (Calgary’s in-your-face neo-Nazis take to the streets, Globe and Mail, March 19, 2011).

A prominent Canadian Holocaust denialist, Fromm toured Australia and New Zealand in December last year at the invitation of the Australia First Party, meeting with and addressing small audiences of other racist cranks in Melbourne, Sydney and Christchurch. AF is standing two candidates in the upcoming NSW state election: Tony Pettitt in Riverstone and Tony Robinson in Mulgoa.

I live in Melbourne, Australia. I like anarchy. I don't like nazis. I enjoy eating pizza and drinking beer. I barrack for the greatest football team on Earth: Collingwood Magpies. The 2021 premiership's a cakewalk for the good old Collingwood.
View all posts by @ndy →
This entry was posted in Anti-fascism and tagged antifa notes, Kyle McKee, Niko Puhakka, Toni Valtonen, White Pride World Wide Day. Bookmark the permalink.