Hitler and The Aliens! 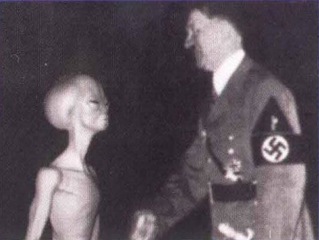 Our discoveries have led us into the production of a number of currently suppressed and sometimes vilified books which are now underground bestsellers. “UFOs–NAZI SECRET WEAPON?” was our first title, now sold out in 5 complete editions. Our second book, “SECRET NAZI POLAR EXPEDITIONS”, is coming up fast and has sold out 2 full editions. Foreign language translations of these books are selling briskly, and it is becoming obvious to everyone that the media-enforced blockade of the truth has now been broken. Three additional books are currently under production and these will round out our Phase I Publishing Program: “THE CIA-KGB-UFO COVERUP”, “THE ANTARCTICA THEORY” and “THE LAST BATTALION”.

This sensational, underground best seller is now in its 5th edition in English and its 2nd edition in German. French, Spanish and Italian editions are now in the planning stages. This is the most talked-about U.F.O. book of the decade! As the center of controversy, its author, Christof Friedrich, has become the subject of much attention and has been a frequently-invited guest on many internationally broadcast TV and radio talkshows which SAMISDAT technicians have recorded on tape cassettes for sale to the UFOlogers and intrigued members of the public. This book is certainly intriguing, for it reveals for the first time amazing plans for Nazi Germany’s ultimate secret weapon: the Flying Disc!

Now in its second, enlarged edition, with many newly-discovered photos and illustrations. This is our latest best-seller. Read for the first time information which has been suppressed by Allied Censorship for over 40 years.

I’m not crazy; you’re the one that’s crazy!

I live in Melbourne, Australia. I like anarchy. I don't like nazis. I enjoy eating pizza and drinking beer. I barrack for the greatest football team on Earth: Collingwood Magpies. The 2021 premiership's a cakewalk for the good old Collingwood.
View all posts by @ndy →
This entry was posted in !nataS, History, State / Politics and tagged Ernst Christof Friedrich Zündel. Bookmark the permalink.

1 Response to Hitler and The Aliens!