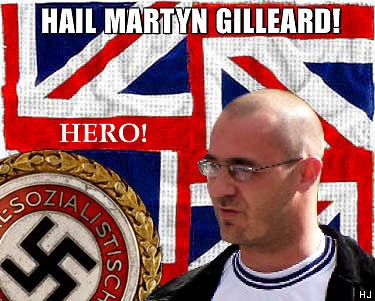 31-year-old British neo-Nazi Martyn Gilleard has been found guilty of two counts of ‘terrorism’-related offences after having pleaded guilty to ten charges relating to the possession of child pornography. According to the BBC (Neo-Nazi had child abuse images, Jon Kelly, June 24, 2008):

Gilleard, a forklift truck driver from Goole, East Yorkshire, admitted to police and the court that he had held racist views. At the time of his arrest he was a paid-up member of the National Front, the White Nationalist Party and the British People’s Party – all opposed to multiculturalism. His computer password was Martyn1488 – the 14, according to prosecutor Andrew Edis QC, being a reference to the far-right’s “14 words” slogan, “We must secure the existence of our race and the future for white children.” The 88, Mr Edis added, represented the eighth letter of the alphabet – an abbreviation for “Heil Hitler”.

That Gilleard was a member of the NF and the BPP is known — in fact, the BPP celebrated Gilleard as being some kind of ‘hero’. I’m not aware of his membership of the ‘White Nationalist Party’, nor even of its existence (but exist, the WNP — nee Aryan Unity — apparently did, albeit very briefly); the BPP itself claims to have expelled Gilleard on June 16, 2008, after it was reported that he had pleaded guilty to child pornography charges. The 14 words are also well-known, having been coined by David Lane (1938–2007), a US white supremacist. Lane died in prison while serving a 190-year-long sentence for various offences against the law, common sense, and basic human decency. Gilleard also appears to have been a heap ’em big fan of Blood & Honour, whose Australian franchise — along with the local franchise of the Hammerskins, another international bonehead network — are organising gigs in Adelaide in July and Melbourne in September.

LONDON (Reuters) – A right-wing extremist and paedophile who wanted to “secure a future for white children” and kept explosives at his Yorkshire flat was jailed for 16 years on Wednesday. Martyn Gilleard, 31, from Goole, had been found guilty at Leeds Crown Court on Tuesday of preparing terrorist acts and of collecting information useful for an act of terrorism. He had pleaded guilty at earlier hearings to possessing live ammunition and 39,000 indecent images of children. On Wednesday he was jailed 11 years for the terrorism and ammunition charges, 12 months for the child images and given another four years because of the danger he posed to the public, a police spokeswoman said. Officers conducting a child pornography raid last October had discovered racist literature, home-made bombs, knives and a rifle at Gilleard’s flat. Among the material seized were membership cards for the National Front, British People’s Party and the White Nationalist Party…

A neo-Nazi paedophile who had four nail bombs under the bed he let his five-year-old son sleep in, has been jailed for 16 years. White-supremacist Martyn Gilleard was found guilty on Tuesday of two counts of terror offences and had pleaded guilty to possessing 39,000 indecent images and owning ammunition without a licence. Judge Millford said: “You claimed that your political fascism was burning out by the time of your arrest, but it was still burning bright.” The week long trial at Leeds Crown Court heard that Gilleard’s home in Goole, East Yorks., was initially searched by police looking for indecent images of children. Martyn Gilleard, 31, idolised Adolf Hitler and urged sympathisers to act to preserve the ‘purity of the white race’…

The Anarchist Cookbook — a document originally produced in the late 1960s/early 1970s, and widely considered as being a production of the US Gub’mint in anarchist circles ever since — is the gift that just keeps on giving.

Martyn Gilleard was found guilty of:

I live in Melbourne, Australia. I like anarchy. I don't like nazis. I enjoy eating pizza and drinking beer. I barrack for the greatest football team on Earth: Collingwood Magpies. The 2021 premiership's a cakewalk for the good old Collingwood.
View all posts by @ndy →
This entry was posted in !nataS, Anti-fascism, State / Politics, War on Terror. Bookmark the permalink.