Dion, December 12, 2007: “As I stated on the Bombshell forum Andy, you are a liar, a hypocrite and no better than the trash that you fight against.” 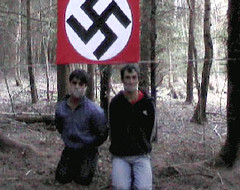 The Investigative Committee of the Prosecutor General’s Office has confirmed the authenticity of a grisly neo-Nazi execution video posted on the Internet last year, according to a June 16, 2008 article in the independent weekly “Novoe Vremya.” An investigator, Vladimir Markin, also confirmed an earlier story that one of the victims–a resident of Dagestan–has been identified. According to the article, the execution was carried out by a group calling itself the National-Socialist Society of Obninsk, a city in the Kaluga region. The two migrants were reportedly abducted from Kaluga and taken to a forested region, where they were shot and beheaded on camera. Their bodies have still not been found.

“Novoe Vremya” added unconfirmed information from police sources indicating that four suspects are already in custody, but one of them is allegedly the son of a high-ranking police official who is reportedly hindering the investigation.

Racist did not aim to use bombs for terror, court told
Olwen Dudgeon
Yorkshire Post
June 19, 2008

A SELF-confessed racist with links to white supremacist organisations told police officers he never intended to commit terrorist offences with four nail bombs found under his bed. Martyn Gilleard said in interview he had made the bombs a long time ago when he “had a few cans” and had just left them in a bag. “I don’t half feel stupid now.”

…He agreed he was a member at the time of the National Front and the British Peoples Party [at the time of his arrest last year] but said he would probably not have rejoined them. He considered himself a white nationalist but did advocate attacking anybody.

Saturday, September 13, Melbourne. Blood & Honour & Southern Cross Hammerskins present the Ian Stuart Donaldson (ISD) memorial gig 2008, featuring local neo-Nazis Blood Red Eagle and Ravenous and anonymous foreign neo-Nazis. The 2007 gig was held at the Melbourne Croatia Social Club. In 2006 and years prior, it was held at The Birmingham Hotel in Fitzroy (as a result of which and a subsequent boycott it is now under new management).

“I always thought that anybody who told me I couldn’t live in the past was trying to get me to forget something that if I remembered it would get them into serious trouble.” ~ Utah Phillips (1935–2008)