The Birmy (Hate to Say I Told You So)

Lovely to see you know what’s going on Andy. The Beefeaters don’t support The Birmy boycott for a fair few reasons, all of which you’ve failed to mention. 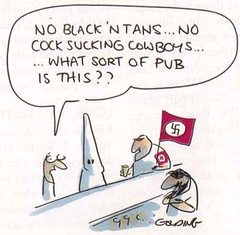 How about the fact that The Birmy’s possibly the only pub on Smith St that welcomes Aboriginals [sic] (and people of any other nationality for that matter)? Or that it’s the only venue in Melbourne that truly supports local bands, offering free practice space and refusing to take any percentage of the door charge from gigs? I guess all this criticism’s fair enough considering they don’t lie about who uses their facilities as appose [sic] to so many other venues in Melbourne who do …

You didn’t happen to make it to The Tote on the 2nd did you? Gospel of Horns (a nazi band as I’m sure you know) had a nice big listing on the upcoming shows board which I’m sure your supporters (Final Warning and The Resignators) must of walked past quite a few times. Funny that, isn’t it?

As great as the name Slack Bastard is maybe you should consider changing it to Misinformed Twat. I’m off to play a set of Jamaican and Two-Tone ska there right now, I’m sure I’ll speak to you soon when you find some other way to twist truths into bullshit.

After a determined campaign — initiated in October 2006 — to isolate and penalise the venue for hosting the neo-Nazi schmucks of Blood & Honour Australia and the Southern Cross Hammerskins, at the end of March management of The Birmy finally capitulated to economic reality and closed their doors. The venue is currently undergoing renovations and will re-open, although it may take a little while for the stench created by the previous management to dissipate…

The Birmingham Hotel supposedly had its last gig on Saturday, February 16, 2008, one featuring the literary talents of a Canadian punk rock author and the musical talents of Napalm Hearts (for whom said author shouts into a microphone). If correct, this presumably means that the owners are selling. Or maybe not. Time will tell. As for the boycott, presuming Gary, the person responsible for booking the neo-Nazis, is no longer involved in the pub, it would appear to have little more purpose…

What impact, if any, did the boycott have on the decision by the pub’s owners to sell? That’s obviously a very difficult question to answer, and until such time as the sale has been confirmed, probably not worth speculating about. For example, it may be that the current owners are not selling but have decided to make other uses of the premises. In the meantime, it’s worth noting that, from September 23, 2006 — the date of the last neo-Nazi gig at the venue — to today, a little over 18 months later, a total of approximately 11 punk gigs have taken place: on October 7, November 11 and 18, 2006; March 2, April 25, July 7, September 29, November 30 and December 1, 2007; and February 9 and 16, 2008. It’s likely that during this period there were one or two other gigs, which to avoid attention remained unpublicised. Of the two dozen or so bands that played, the most loyal have been Slick 46 (4 gigs) and The Worst (5 gigs); most others, with the exception of The Boots, Bulldog Spirit, Charter 77, Marching Orders, Poverty Bay Goon, Sewer Cider and Wot Rot, played just once.

I can confirm that the birmingham has been sold. It will no longer be hosting gigs associated with b & h or any such political organization. I dare say they may not even have bands on, at least for a good while as the association is far and wide spread and distancing the venue as far as possible from neo nazi punks will be high on the agenda. [The] venue is currently closed for renovations and will reopen soon.

Many thanks to the bands and punters — punx, skinz and herberts — who participated in the boycott. As for the other venue (2007) for the boneheads’ annual knees-up, it’s unlikely to be hosting the “scum” again this year.

Here’s what Chunga, the lead singer of The Worst has had to say on the subject:

And yes… I know there have been a couple of Nazi gigs there in the past… but to be honest… I couldn’t give a left nutsack what bands have played there before! […] All these tossers that care sooo much about shutting down The Birmy need to get a fucking life!!! Them accusing us [of] supporting racists for playing at a pub… is no better than being a [N]azi! […] The crusty wankers who think they’re so good for being anti-racist are no fucking better than the [N]azis… They think they’re better than everybody!!! And they dislike anyone who doesn’t share their beliefs… Fuck off you cocksuckers and get a life!!!

But seriously… all you’re doing is bringing more hate into this scene.
People hate you… because they are showing up to the Birmy expecting a fun night with bands… with no Swastikas in sight… and they show up to an empty pub because some loser is trying to boycott the place.
And now… you got a whole bunch of your fuckbag mates hating me coz apparently I’m a scab…
And how am I wrong when I say you need to get a life???
Surely you must be surfing through blood and honour websites 24/7 to be getting the information you put on your shitty site.
Anyway… anarchy is a fag… that’s all I have to say to you Mr Moran…

See how fast words travel my friends? Be careful what you write on the internet…
Coz you never know when some stalker is gonna put it on there [sic] website.
Thanx to the people who have supported us… and to the random [sic] people letting us know about this anarchist knobjockey Mr Moran…

You would have to call that a pretty unsuccessful boycott.

Walking down Smith Street I see so many faces…