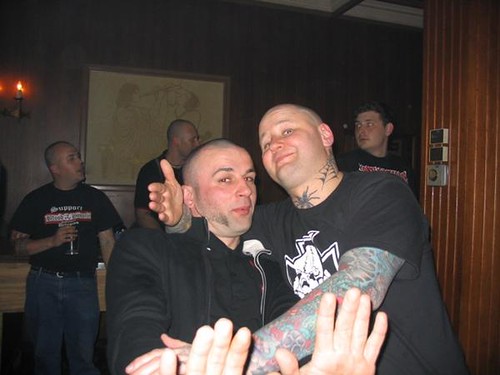 On Saturday, September 23rd last year, a local Melbourne pub named The Birmingham Hotel in Fitzroy hosted a neo-Nazi gig, an annual commemoration of the death in 1993 of Ian Stuart Donaldson, vocalist with undoubtedly the world’s most famous neo-Nazi rock ‘n’ roll band, Skrewdriver, and also co-founder, with another good fascist, Nicky Crane, of the international neo-Nazi music network Blood & Honour. The gig was organised by two groups, Blood & Honour Australia and the Southern Cross Hammerskins. Three bands played at the gig — Bail Up!, Blood Red Eagle and Ultraviolence — and the crowd was relatively small; around 50 or so. Organising the annual memorial gig is the chief activity of the local branch of B&H, and — to the best of my knowledge — it has been held every year since 1994. This year, the gig will be held at an undisclosed location, again in Melbourne, on October 13. Scheduled to perform are Bail Up!, Fortress, Quick & the Dead and one, or possibly two, other, foreign acts.

As is the case with all events organised by B&H, the annual memorial gig is held at an undisclosed location. Thus, in 2006, it was only by anti-racist activists employing subterfuge that the venue for the gig, The Birmingham Hotel, was discovered, and then only less than 24 hours before its actual occurrence. The gig itself passed off peacefully for those who attended, although one local (black) woman was assaulted on the night of the gig after running into a gang of racists just around the corner from the pub. Both the gig and this incident of racial abuse were reported in a local paper, The Melbourne Times, and on Saturday, October 28th, a protest was held outside of the pub denouncing fascism and The Birmy’s role in helping to promote it. Since that time, a boycott of the pub has been called for, and the following is intended to be an assessment of its effectiveness and overall utility.

For the last ten years, The Birmingham Hotel (333 Smith St, cnr. Johnston & Smith Sts, Fitzroy, 9417 2706) more popularly known as The Birmy (Licensees: Eighth Thelos and W. Simeoni), has been managed by a bloke named Gary. Gary is a 43 year old Kiwi, and during his tenure as manager, The Birmy has developed a reputation as being a venue both for punks and skinheads but also boneheads. In 2002, for example, The Birmy hosted at least two neo-Nazi gigs (one to celebrate Adolf Hitler‘s birthday), as well as regular meetings of B&H. Since then, The Birmy has also hosted the annual ISD memorial gig, most recently in 2006, and again in 2005. The exact number of such events held at The Birmy, and any further details concerning them, is largely unknown, as the gigs are kept secret from the public by B&H, largely in order to avoid potential disruption from forces hostile to neo-Nazism, but also to avoid public embarrassment to their collaborators such as Gary; in fact, for reasons best known to himself, to this day Gary denies that The Birmy has ever been used by neo-Nazi organisations.

As noted, The Birmy has also earnt a reputation as a punk venue, and over the years many local punk bands have performed there. The Birmy has also featured on a number of annual punk pub crawls, and the pub is often described as being one of the more punk-friendly venues around town. Thus, in publicity material for the pub, “The Birmingham, or as regulars like to call it, The Birmy” is described as being “a great place to kick back and relax with the likes of the Melbourne alternative scene. With a free function room, Melbourne’s local Punk bands are often seen playing here. It’s a relaxing night at the Birmy but be prepared for a crowd which is a little different”. In summary, as a result of the pub’s hosting punk gigs, as well as its general ambiance, many local punks have developed a strong attachment to it, and this fact, in turn, helps to explain the reaction by many to calls for a boycott of the pub.

On the one hand, in the approximately nine months since the ISD memorial gig, at least six punk gigs have been held at The Birmy (on October 7, November 11, and November 18, 2006, and on March 2, April 25 and July 7, 2007) at which 15 oi!, punk and ska bands have performed. On the other hand, and more recently, one gig, scheduled to take place on June 22, was cancelled; members of Tenth Dan and Speartackle, after having been contacted and alerted to the existence of a campaign to boycott The Birmy, deciding that they would support it. (And once again, thanks to Speartackle and Tenth Dan for so doing.)

In the absence of regular forums in which the matter is discussed, as well as the generally amorphous nature of the local punk milieu, it’s difficult to measure the popularity of the boycott, and the extent to which it’s actually endorsed by local punks (and skins). Nevertheless, six gigs in nine months is undoubtedly a far lesser number than what would normally be the case for The Birmy, and I’m unaware of a band having previously cancelled a gig as a result of being made aware of the pub’s status as a neo-Nazi venue. Further, anecdotal evidence suggests that, even if they prefer to adopt a laissez-faire and classically bourgeois attitude towards neo-Nazi activists, many bands and their fans feel at least some obligation to take the proposal seriously, even if that means binding themselves in all sorts of ideological knots in an attempt to justify their (ultimately supine) position.

The Politics of Punk

In general, and predictably, opposition to the boycott has been most strongly expressed by the most reactionary elements in the local punk milieu, and by bands which have never been known to express especially subversive or oppositional politics. Such an approach is reinforced and cultivated by the by now decades-old corporate assault on punk sub-cultures, which seeks to remove any dissident elements from these sub-cultural domains in order to better facilitate the penetration of market forces, and bring about the concomitant reduction of punk to just another (currently lucrative) niche market. It also takes place in a broader political context in which middle class privilege has increasingly sought to replace a more combative, working class subjectivity, both in ‘mainstream’ but also ‘cultural’ politics. We are thus treated to a wide array of bands and labels proclaiming themselves to be ‘working class’, while at the time espousing attitudes, behaviours and political perspectives previously the hallmark of the middle and upper classes, and which function in order to preserve and to extend their interests.

Politics, of course, also has a personal dimension, and nowhere is this more fully revealed than when it comes time for someone to effectively declare, as in the present context, which side they’re on — and to thereby risk alienating, not only potential customers, but (potential) friends, too. Thus it isn’t especially surprising to discover that a band such as Bulldog Spirit, whose drummer is a fair dinkum neo-Nazi, should choose to support Gary and The Birmy. And, given the vocalist Doug’s membership of Marching Orders, neither is this latter band’s support for Gary and The Birmy unexpected (alongside of The Worst, the band has played three of the six punk gigs at The Birmy). At the same time, B&H’s reluctance to publicly disclose its activities is mirrored in local bands’ reticence to be honest about the personal commitments which render them less likely to take a stand against fascism and local neo-Nazi networks; often, for the very simple reason that they already form part of these networks.

Such is the case with Fiona Deadset and Jay Snapshot.

Since I first raised this issue on my blog, I’ve received a number of responses, which may be divided into three main categories. The first is hate mail, chiefly abuse and/or ridicule, coming from members or supporters of B&H and/or the SCHS. (One of these fine folks, cj, is featured in the photograph at the beginning of this post.) The second consists of supportive statements. One of the first was from Jason Bastard of Bastard Squad, who wrote:

It’s about time we find out where our friends really stand. This is something that can no longer be ignored. The annual punk pub crawl happens this Saturday (September 30), and it usually finishes at the Birmy. I cannot believe that punks will still go to the Birmy after something as significant as this. Hypocrisy seems no longer an issue in today’s ‘anything goes’ apathetic punk scene. If punks go to the Birmy, even the fundamentals that we all share become null & void. It would be nothing less than ridiculing ourselves.

Unfortunately, Jason did just that. Nevertheless, in rhetoric at least, Jason is one of the few local punks to have publicly supported a boycott — which is quite unlike the sentiments expressed by those belonging to the third category, members of which devote time and energy to engaging in both elaborate but more often remarkably simple-minded apologetics for the pub and their continued support for it. Of these, one of the chief protagonists has been Red of Charter 77. Notably, Charter 77 was approached in 2002 in relation to this issue, following The Birmy’s then-recent hosting of a number of other neo-Nazi gigs. Then, as now, when asked for their support, the band said piss off; a position which is no doubt appreciated by and a source of some amusement to Gary and local boneheads (if few others).

9 Responses to Boycotting The Birmingham Hotel