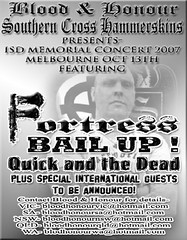 Blood & Honour Australia and the Southern Cross Hammerskins have announced a date and line-up for their annual Road Safety Awareness concert. The date is Saturday, October 13 (two weeks after Collingwood wins the AFL Grand Final) and the line-up is Bail Up!, Fortress, Quick & the Dead and — we are promised — at least one other band or performer from one of them bloody foreign countries what’s full of all them bloody foreigners.

Speaking of bloody foreigners, while the Australian franchise of the B&H brand was the first to be established outside of the UK, following recent splits (2004/5) in the international movement, it is currently only recognised by one of the two main tendencies to emerge from the splits — a faction aligned with the Hammerskins. And the Hammerskins, too, especially in the network’s US heartland, are being increasingly forced to compete with other bonehead organisations for the short attention spans and loyalties of even shorter-haired racists, with large numbers of independent and unaligned boneheads apparently growing tired of the Hammerskins’ elitist attitudes and behaviours.

The ongoing devolution of the bonehead scene began with what will live in infamy in bonehead lore as “the pool cue and blowtorch incident.” It happened in mid-1999, when Hammerskin Nation’s power was peaking, with about 600 Hammerskins distributed across five regional divisions. To become a Hammerskin, a bonehead who wanted to join had to be a “prospect” for one year, then a “probate” for six months. All this time, and forever after, they were required to pay $10 a month in dues to their local chapter, and $10 a month to Hammerskin national leaders in Dallas, who asserted dominion over boneheads nationwide, portrayed Hammerskin Nation as elite, and enforced strict codes of conduct.

Early that summer, these leaders issued a direct order to the members and two probates of the Indiana chapter of the Northern Hammerskins that set in motion a cycle of bloodshed, retaliation, and dissent that continues to shape the level and nature of bonehead criminal activity in this country and abroad.

The order was simple: Hammerskin leaders had determined that a certain Hammerskin was no longer worthy of membership due to his persistent sexual propositioning of a fellow member’s wife. They directed the Indiana Hammerskins to seek out this offender, inform him of their decision, and then “remove” his Hammerskin “colors,” meaning any patches, pins or other markers indicating his affiliation.

Looking back, the Dallas shot callers may wish they’d been more specific on the meaning of “remove.” When a pack of five Indiana Hammerskins tracked down the offender, they not only roughed him up and tore off his colors, they held him down, burned off his Hammerskin tattoos with a blowtorch, and then shoved a pool cue up his rectum.

The Hammerskin leaders were outraged and banished the attackers for exceeding their orders. Basically, the five Indiana boneheads were punished for being too violent. Eight of the other Indiana Hammerskins turned in their patches in protest of the punishment and together, the 13 former Hammerskins formed a new, rogue crew they called Outlaw Hammerskins, which represented the first serious challenge to Hammerskin Nation authority…

But back to road safety.

Formed way back in 1981, Quick & the Dead is an old-school racist oi! band from Perth. In fact, Quick & the Dead is probably the first mob of string-plucking, tub-thumping boneheads to come from Down Under. The band is led by the almost 50 year-old bass player Murray Holmes, who has the dubious distinction of actually having shared a stage, alongside another Aussie, Adam Douglas, with the Skrewydriver himself, Ian Stuart. Holmes and Douglas joined the dead loser’s band in 1984, and left the following year, but not before taking part in the recording of Hail the New Dawn, widely regarded as being among the top one hundred albums ever to have been recorded by a middle class bloke from Blackpool with a Grammar school education who then died in a car accident in 1993.

Within Australia, those wishing to purchase the world’s leading exponents of neo-Nazi muzak may do so through Sydney “hardcore” label Snapshot (Hail Victory and After the Fall are both available for $20) or through local neo-Nazi distro Scythian Services. And remember that, as Jay Snapshot says: “judge me all you want from what records i sell, but like the word you used before champ… its economics…”

Murray himself is convinced of the legitimacy of this text, as he is of the fact that the population of the town in which he lives all share his hatred and contempt for blacks and Asians. And — lemme *hic* tell you *hic* something — the problem with Australia, according to Murray, is the fact that ZOG has been letting in “so called refugees from all these sand nigger countries now for years” and “slowly but surely” their “numbers have increased” to “epidemic proportions”.

Quick Murray, behind you!

How much of a gutless wonder was Ian Stuart…?

Dave: Stuart was a coward who couldn’t fight to save his life. The fascists might regard him as some kind of nationalist super-hero, but he was just another bully who didn’t like it when the odds weren’t heavily in his favour. He was ambushed several times by AFA activists in London, and eventually fled to Derbyshire in order to escape the constant attacks. Hardly the actions of a brave street-fighter. A couple of friends of mine jumped him before a Blood and Honour gig at Swiss Cottage, and managed to hit him a couple of times before he ran away. At the gig afterwards, he deliberately left the blood to dry on his forehead, so that he could appear more heroic, and then went on stage and claimed that he had fought off a whole mob of “reds” single-handedly.

Did you ever go toe-to-toe with Nicky Crane?

Dave: No, and I’m glad I never had to. He was one of the few genuine hard men on the bonehead scene. I came across him twice. The first time was at the Main Event in Hyde Park, where he disembarked from a mini-bus with a dozen members of Skrewdriver Security. He immediately jumped back onto the bus when he saw the posse of anti-fascists charging out the park at him. The other occasion was when he was heading home from the West End one evening with a number of rent-boys in tow. We followed him for a while, but lost him at Charing Cross station. The interesting thing about Crane was that he was openly gay, but was never challenged about it by his bonehead mates until he was physically weakened by AIDS. He apparently renounced his fascist past during his dying days.

Obviously, it’s unknown at this stage where the gig will be held, but it’s unlikely to be held at The Birmy… although you never know. In any event, while the boneheads may have deserted The Birmy, local working class punks are only too happy to fill their boots, the next opportunity for them to congratulate the proprietor Gary on being such a Top Bloke being July 7, when Distorted Truth, Sewer Cider, The Boots, The Worst and Wot Rot will be holding a gig to celebrate The Worst’s five year anniversary and to launch their new EP. Coincidentally, on the same date in 1942, Heinrich Himmler granted permission for sterilization experiments at Auschwitz:

Sterilization of women was carried out by the pumping of a thick white test fluid, consisting of contrast medium and some unknown chemical agents, into the uterus and tubes. Also sterilizing operations were performed, the uterus, tubes and even sometimes breasts being removed. Women experienced great suffering during test fluid experiments and after them. Usually salpingitis or peritonitis followed which often proved fatal.

These experiments were performed on young and healthy Jewish women of 20-30 years of age, who had regular periods, a not too narrow cervix and who had borne at least one child. After the experiments they often lost their periods. Experiments were repeated from two to six times at intervals of from three to four weeks. In their course an X-ray control was carried on by screening and an X-ray was taken afterwards. The experiments aimed at the obliteration of the tubes. This was to be achieved through the inflammation of the mucous membrane of the uterus and of the tubes. This, in conjunction with the inflammation of the internal genital organs and often of the peritoneum caused widespread adhesions and fibrothic changes. Men were also sterilized through suture of the vas deferense.

The total number of sterilization experiments was estimated by witnesses at about 3,000 and of the test fluid experiments at about 1,000…

I live in Melbourne, Australia. I like anarchy. I don't like nazis. I enjoy eating pizza and drinking beer. I barrack for the greatest football team on Earth: Collingwood Magpies. The 2023 premiership's a cakewalk for the good old Collingwood.
View all posts by @ndy →
This entry was posted in !nataS, Anti-fascism, Collingwood, History, Music. Bookmark the permalink.