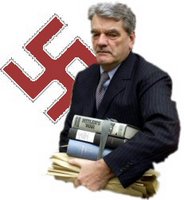 Gentleman, scholar and Nazi apologist David Irving has finally been granted his wish for political martyrdom, an Austrian court on Monday sentencing him to three years in jail for denying the Holocaust. Bizarrely, The Guardian reports that “Irving had pleaded guilty to denying the Holocaust in two speeches on a visit to Austria in 1989, but said at the trial that he had later changed his views”.

The Guardian has a copy of the indictment which cites copiously from the speeches Irving made in 1989. “There were no extermination camps in the Third Reich,” he declared. “Is it not time once and for all to put an end to this fairy tale of the gas chambers.” Adolf Hitler “held out his hands to protect the Jews”, and knew nothing of the Final Solution. Thirty thousand people were murdered at Auschwitz in Nazi-occupied Poland – as opposed to the accepted figure of 1.5 million. After the war, the Poles fabricated the gas chamber evidence at Auschwitz to match the “fantasies” of survivors. The billions paid in reparations after the war by Germany to the state of Israel were unwarranted. “That is, of course, embarrassing. It was all a huge swindle … Why does the German people let itself be slandered thus?”

Dunno David, but it looks like it’s the Austrians who really don’t take kindly to strangers and their slanderous lies. Which is unfortunate, as Deborah Lipstadt points out in relation to the issue of free speech, the law and Holocaust denial:

Lipstadt says the reason she is generally opposed to outlawing Holocaust denial is not because she fails to recognise how deeply offensive it is but because such laws tend to turn cranks into martyrs. “I am not interested in debating with Holocaust deniers,” she says. “You wouldn’t ask a scientist to debate with someone who thinks the Earth is flat. They are not historians, they are liars. Debating them would be nonsensical. But we also should not allow them to become martyrs. Nothing is served by having David Irving in a jail cell, except that he has become an international news issue. Let him go home and let him continue talking to six people in a basement. Let him fade into obscurity where he belongs.”

Well, either that, or send him to jail and ensure that he becomes a fascist pin-up boy.

I live in Melbourne, Australia. I like anarchy. I don't like nazis. I enjoy eating pizza and drinking beer. I barrack for the greatest football team on Earth: Collingwood Magpies. The 2020 premiership's a cakewalk for the good old Collingwood.
View all posts by @ndy →
This entry was posted in Anti-fascism, History, State / Politics. Bookmark the permalink.
Login