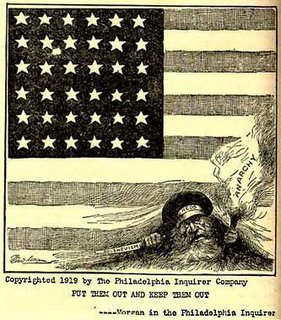 Recently, left-wing ALP maverick Bob Gould has weighed in on the subject of the DSP/Resistance and the burning of flags. From Bob the (Socialist Movement) Builder’s perspective, “It would be easy to dismiss this initiative as a dopey student prank, but as it’s clearly sponsored by the new DSP leadership it’s rather more than that”. (Er, not necessarily Bob. After all, it could be that the new DSP leadership has little more political sophistication than your average “dopey student”. But be that as it may…)

Bob reckons that this DSP “initiative” / publicity stunt can be most easily explained by the party’s decreasing ability to recruit “dopey students”; a field that Socialist Alternative has apparently come to dominate. (Although where this leaves the International Socialist Organisation is unclear.) Equally obviously, although not to Bob, is the political capital attached to the media attention generated by the DSP/Resistance member formerly known as the radical artist Azlan McLennan, whose last presumably ‘primitive’ and ‘ultraleftist’ work, featuring a burning Australian flag, was censored by police.

Speaking of flags, Gould gets it wrong, and Boyle gets it right, when referring to the appeal of the Eureka flag; popularly, but also — and most significantly — in the labour movement. According to Bob:

The main proponents of the Eureka flag in Australia in recent times were the Maoists in the 1970s and 1980s, who associated it with an exaggerated Australian nationalism versus US, Russian and British imperialism in whichever order the current Maoist political line then dictated — it changed several times. In those days the DSP quite validly used to polemicise against that sort of Australian nationalism. The Eureka flag has also been used extensively by the same fascists who also from time to time wrap themselves in the existing Australian flag.

Symbolic possession of the Eureka flag has been fought over by both left- and right-wing nationalists. At present, however, it appears to me that the left is winning. The Australian flag is often viewed as an imperial one; the Eureka flag a symbol of rebellion. Its adoption by contemporary left-wing trade unions is certainly more in keeping with its history than its use by the (radical) right. In any case, the Maoists of the 1970s and 1980s have thankfully disappeared up their own (virtual) arseholes; while National Action is dead and buried.

Still, while decrying the “ultraleft adventure” that is flag-burning, Bob’s real point is this:

What’s required in current Australian conditions is the maximum united front of the working class and the progressive sections of the middle-class and the labour movement, and the socialist groups to mobilise against the industrial laws of the Howard Government, and to rebuild a movement against the Iraq War, both difficult tasks.

Standard leftist fare, in other words. And personally, I prefer a well-balanced diet.

Although Western leaders pretended to welcome the recent Stalinist collapse as a natural victory for their own system, none of them had seen it coming and they now obviously have no idea what to do about all the problems it poses except to cash in on the situation before it totally falls apart. The monopolistic multinational corporations that proclaim “free enterprise” as a panacea are quite aware that free-market capitalism would long ago have exploded from its own contradictions had it not been saved despite itself by a few New Deal-style pseudosocialist reforms.Those reforms (public services, social insurance, the eight-hour day, etc.) may have ameliorated some of the more glaring defects of the system, but in no way have they led beyond it. In recent years they have not even kept up with its accelerating crises. The most significant improvements were in any case won only by long and often violent popular struggles that eventually forced the hands of the bureaucrats: the leftist parties and labor unions that pretended to lead those struggles have functioned primarily as safety valves, coopting radical tendencies and greasing the wheels of the social machine.

As the situationists have shown, the bureaucratization of radical movements, which has degraded people into followers constantly “betrayed” by their leaders, is linked to the increasing spectacularization of modern capitalist society, which has degraded people into spectators of a world over which they have no control — a development that has become increasingly glaring, though it is usually only superficially understood.

Taken together, all these considerations point to the conclusion that a liberated society can be created only by the active participation of the people as a whole, not by hierarchical organizations supposedly acting on their behalf. The point is not to choose more honest or “responsive” leaders, but to avoid granting independent power to any leaders whatsoever. Individuals or groups may initiate radical actions, but a substantial and rapidly expanding portion of the population must take part if a movement is to lead to a new society and not simply to a coup installing new rulers. 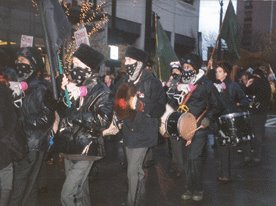 I live in Melbourne, Australia. I like anarchy. I don't like nazis. I enjoy eating pizza and drinking beer. I barrack for the greatest football team on Earth: Collingwood Magpies. The 2021 premiership's a cakewalk for the good old Collingwood.
View all posts by @ndy →
This entry was posted in Anarchism, Art, History, Poetry, State / Politics, Trot Guide. Bookmark the permalink.