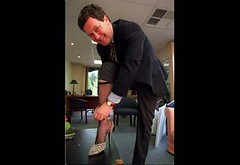 In the nearly three months since he retired from Federal Parliament — “It has been a great honour to have served the people of Mayo for nearly 24 years and I am deeply grateful to them for the support” — Alexander Downer has kept himself very busy. First — in fact, on the same day (July 13, 2008) he announced his retirement — Alexander was appointed as Vewy Special Envoy to Cyprus. What this means is that Alexander “sits in on the meetings [of Greek and Turkish Cypriot heads of state] and helps the leaders by making suggestions” (Downer to urge leaders to pull their socks up, Jean Christou, Cyprus Mail, October 8, 2008).

What kind of suggestions, I wonder?

Does he in fact regale them with tales of his adventures with other world leaders?

For example, did you know that:

Alexander has met Madeleine Albright, Colin Powell and Condi Rice?
Upon arrival at the Elysee Palace — in Paris — he was greeted — on the front steps — by President Chirac?
His putter is Korean, and was given to him by Ban Ki Moon, the Secretary General of the United Nations after Alexander cleaned him up on a splendid course in Seoul?

All these tall tales and true were once available on Alexander’s blog, but — alas! — for some reason he has decided to cease recollecting his exciting career as a diplomat on teh Interwebs.

In any event, as the Londra Gazete reports (Worry over slow pace of Cypriot negotiations, October 9, 2008): “Mr Downer was officially appointed special envoy in July and this is his third visit to Cyprus since then. At the UN General Assembly in New York last week, Mr Downer agreed the process of direct negotiations was moving slowly and the two sides were yet to shift from their opening standpoints. He briefed UN Secretary-General Ban Ki-moon and Under-Secretary-General for Political Affairs Lynn Pascoe on the status of the talks.”

I wonder if Ban and Alexander found time for a spot of golf?

Finally, this is not to suggest that Alexander has not impressed anyone with his diplomatic skills. Jason Koutsoukis, Middle East correspondent for The Age, is impressed. And so are Alexander’s critics. According to Jason ‘Downer impresses his critics in bid for peace’ (October 11, 2008; note that Jason replaced Ed O’Loughlin earlier this year). I confess to being unsure precisely which critics Jason is referring to; nor, for that matter, how exactly they’ve been impressed by Alexander the Great Diplomat. Perhaps the following is an example? “An Australian to direct the negotiations here? Yes, we were suspicious,” says Mr Guclu. “We have never had one like this before; Americans, British, Europeans, more Americans.”

But not an Australian.

Split into two in 1974, a divided Cyprus is a major sticking point for Turkey’s integration into the EU. If Alexander manages not to say or do something particularly stupid or offensive, it may be that Greek Cypriot and Turkish Cypriot authorities will arrive at some kind of mutual accord. In which case, it was probably a good thing that, as far as Jason was concerned, “Mr Downer… was not available for an interview in Cyprus”.

Of course, that’s not all Alexander’s been up to: in May, he became a spy.

Tentacles of the spy group Hakluyt have spread as Thomson Reuters co-deputy chairman Niall FitzGerald takes over as chairman from Sir William “Willie” Purves, the former HSBC chairman who steps aside after nine years… Other non-executive directors on the small main board are Mark Getty, of the US oil family fame, golf-playing Robert Webb QC, the British Airways general counsel who also sits on the board of the London Stock Exchange, as well as former UN under-secretary general Sir Kieran Prendergast.

Yes Virginia, there is such a thing as the transnational ruling class.

“Last month Australia’s richest man, Andrew Forrest, chief executive of the Fortescue Metals Group, announced a plan to create 50,000 indigenous jobs over the next two years. Mr Mundine, along with fellow indigenous leader Noel Pearson and businessman Sir Rod Eddington, will run the Australian Employment Covenant and he said it would be vital that the meeting strengthen the project.”